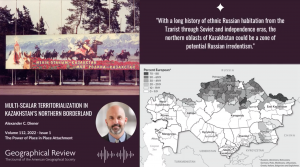 Terms used in the study of people/place bonding too often circumscribe thinking to either the most readily conceived and tangibly experienced scale of place – home/neighborhood – or to the most politically prevalent scale of place – the state. In doing so, researchers ignore the influence of places that help constitute identity between and above the aforementioned scales. A more elastic conceptualization of place attachment allows for mutability of place-identities and their capacity to be both multi-sited and varying in scale. With a long history of ethnic Russian habitation from the Tsarist through Soviet eras, the northern oblasts of Kazakhstan emerged as a borderland of potential irredentism akin to eastern Ukraine. Calls for secession and annexation have, however, been minimal thus rendering the region’s amalgam of place identities a ready case for considering relational geographies of borderland place-attachment.