The article has two objectives. Firstly, to document why a negotiated piece in WWI was resisted by the U.K. and France. Secondly, to show how Halford Mackinder’s perspective changed during the war, leading him to revise his Pivot strategic view and create the Heartland thesis in which East Europe becomes the center of strategic gravity.

In an era, when China is building roads and railroads across Euro-Asia, it is useful to be reminded of the continued strategic importance of the Heartland.

Many viewing the film 1917, with its portrayal of the futility of trench warfare have asked, “Why no negotiated peace?” French and British leaders were not prepared to leave Germany in control of Middle and Eastern Europe, stretching from the Baltic to the Persian Gulf, providing a platform for a future push for European hegemony.

Halford Mackinder (1861-1947), geographer and member of Parliament, having access to some Cabinet papers, understood the necessity of first defeating Germany before signing peace treaties. Mackinder’s strategic vision had evolved.

In his 1904 Pivot paper, Mackinder identified four powers that might dominate Euro-Asia: Germany, Russia, China, and Japan. In Democratic Ideals and Reality (1919), East Europe is highlighted as the probable arena of conflict; the key to dominating the Euro-Asian Heartland: Germany and the emerging Soviet Union were the only contenders for control of East Europe. Mackinder left no doubt that Germany would remain a post-war threat, with Russia unable to resist German eastward expansion for, at least, a generation.

With the resurgence of Germany in the 1930s, exactly the threat that British and French WWI leaders feared emerged. Germany conquered Western Europe and in Operation Barbarossa came close to dominating the Soviet Union and the Heartland. Then the Red Army occupied East Europe, setting the stage for Containment and the Cold War. 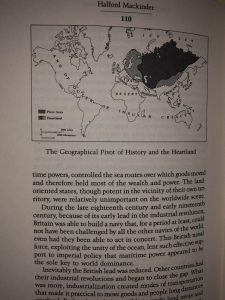 The article suggests changes to the study of Mackinder’s Heartland thesis.

At a time, when Russia is making threatening gestures towards East Europe, it is useful to reconsider the strategic importance of the region.