This study introduces the key characteristics of and recent changes in the global submarine fiber-optic cable network that handles 99 percent of international data traffic. The network’s importance lies in its ability to generate and relay meanings and practices that sustain contemporary, networked societies globally. Furthermore, this study elaborates the problems this critical cable infrastructure is facing by focusing on the challenges of slowness or lack of faster connections and of concentration in critical communications infrastructure. The ongoing submarine communication cable projects planning to utilize the seabed of the Arctic Ocean are studied in order to analyze whether the new routes at the top of the world could increase the diversity of the global network and offer faster connections between Europe, North America and East Asia. Although the actors directly involved in the submarine cable industry are aware of the challenges related to chokepoints and overconcentration as well as of the proposed ways to solve these problems, the final step leading to concrete actions may demand a greater awareness among decision-makers, academic community and general public. Similarly, the  cooperation between the submarine fiber-optic cable industry and academia, which could take form in SMART (Sensor Enabled Scientific Monitoring and Reliable Telecommunications) or dual-purpose cables and increase knowledge concerning the conditions at sea and the marine life as well as to improve tsunami warning systems, can be carried out only, if a large and versatile enough group of people are aware of the idea that appears as a great example of a win-win situation. 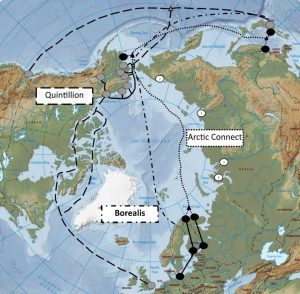 The Planned Submarine Fiber-Optic Cable Projects through the Arctic Ocean.

This study brings together academic research literature and discussions among the cable industry practitioners. At the same time, it connects the lively international discussion about connectivity in the Arctic, which often takes place in forums and platforms concentrating solely on the Arctic science, governance and business, with developments taking place at the global level. Although the cable industry has been booming and the newly installed fiber-optic cables can transmit much more data than the old ones supplemented or replaced, this article concludes that neither technological development nor laying of new submarine cables along existing cable routes resolves the network challenges. The proposed Arctic submarine fiber-optic cable projects could be at least a partial cure to the illness. However, they face the same challenges other submarine fiber-optic cable projects suffer from in other parts of the world, ranging from economic protectionism and national security concerns to negotiations concerning the fishery and environmental issues. In addition, the companies behind these new routes have to collect and analyze extensive amount of data concerning seabed topography and sediment types as well as the possibility of natural hazards and their recorded effects on infrastructure. Moreover, they need to face uncertainties concerning, for example, maintenance costs and market demand. This study also shows that the completion of the Arctic cable projects would not change the fact that the submarine fiber-optic cable network carrying information mirrors the global flows of capital and trade. The meaning and value of these projects to the people and communities located in the Arctic would depend, for example, on the local telecommunications companies’ readiness to improve local terrestrial networks, cooperation between different types of connectivity providers, and the national governments’ willingness to subsidize such activities. 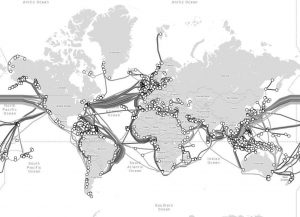 The concept of network that is at the core of this study is understood and analyzed in two different ways. First, it is a structure or physical constellation that develops when communication needs increase, political and geographical circumstances allow, and strong enough economic and business incentives exist for its supplementation. Second, it is a metaphor to explain societal evolution; reason political, economic, religious, judicial and cultural decision making; and describe events taking place around the world. Therefore, the fiber-optic submarine cable network is not only considered as a technical construction, but a mechanism generating interactions and transmitting ideas and practices that shape societies around the world. Finally, this study demonstrates the significance of the fiber-optic cables to geography by directing attention toward the physical infrastructure that is defining centrality and peripherality, i.e. the geography of cyberspace where distances are measured primarily in milliseconds.