By: Robert Briwa and William Wyckoff 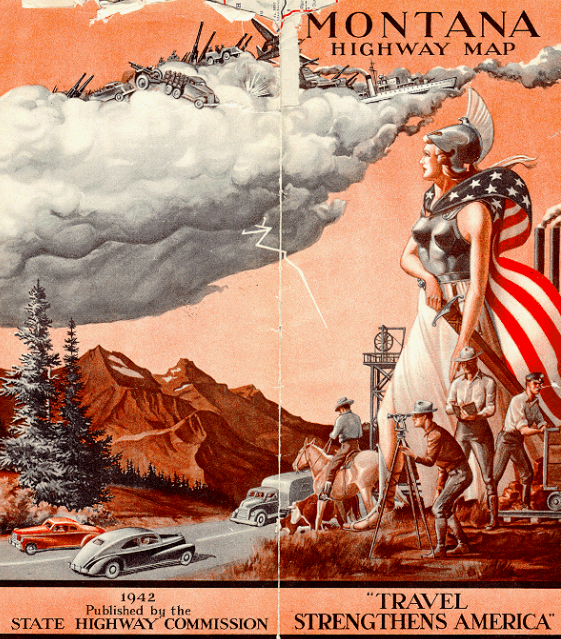 What is the main purpose of your study?
We sought to explore how Montana’s official state highway maps helped construct Montana place identity for the purposes of tourism promotion. Maps achieved this through selective use of cartography, images, and text. As historical geographers, we were also interested in examining how the place-based heritage conveyed by the maps changed over the course of their production in the twentieth century.

What are the practical, day to day, implications of your study?
It is important to remember that maps are not neutral representations of the world. Instead, all maps are deliberately constructed to promote specific agendas. Our work shows that in the twentieth century American West, official state highway maps like those produced by the Montana Highway Department were important tools in promoting tourism and helped construct Montana and American West place identity through the interplay of cartography, images, and text.

How does your study relate to other work on the subject?
We situate this study at the confluence of critical cartography, historical geography, and heritage studies.

Critical cartography assumes that maps are not neutral representations of the world, but instead privilege particular viewpoints. There is a lot of great work exploring maps through this perspective, ranging from the critical to the popular. Our work on Montana maps fills an empirical gap by considering an understudied type of map—official state highway maps—and exploring how they were used by states to deliberately project a specific place-based identity. Through exploring maps produced over nearly a century, we also contribute to this literature by offering a methodological road map of how to approach longitudinal studies of maps through the lens of critical cartography.

Finally, we drew concepts from the interdisciplinary field of heritage studies, which has a large body of scholarship examining how heritage is constructed and projected through monuments, historic preservation, and museums. Heritage, broadly defined, is a selective mobilization of the past to promote particular ideologies and agendas in the present. Heritage is a critical part of identity formation. Our study drew from this conceptual framework to focus on how the maps selectively presented dimensions of Montana heritage for the purposes of tourism promotion. We suggested that maps are often overlooked, but very powerful, means of constructing and projecting place-based heritage.

What are two or three interesting findings that come from your study?
As historical and cultural geographers, it is rewarding to work within archives and a little bit like participating in an archaeological dig. You never know what has been preserved in archival records, or what you will find. It’s always affirming to come across a document that really brings together speculative parts of your research and makes them concrete.

One of those moments arrived early in the research, when we came across documentation of Montana highway map print runs. Maps were printed and distributed annually in their tens of thousands, and eventually by the million. This was an interesting finding because it showcased how state maps were a cornerstone of Montana state government tourism promotion in the twentieth century. The highway maps—and the ways they represented Montana through cartography, imagery, and text—reached audiences all over the United States in huge numbers. There is even some archival evidence indicating that Montana highway maps were distributed overseas. The way the maps represented Montana, then, was reaching a large audience and had the potential to shape their understanding of Montana place identity. All of this speaks to the research’s larger point: that maps are able to convey selective ideas about place that can be leveraged in tourism promotion, but in doing so they also have the ability to shape people’s understanding of the places they depict.

Our qualitative content analysis of Montana maps suggests that they establish five facets of place identity: territorial identity, ties to the mythic American West, natural wealth, outdoor recreation, and hospitality. These were consistently leveraged by the Montana Highway Department to promote tourism throughout the twentieth century. The ways these themes were expressed by the maps, however, changed over time in response to wider regional and national contexts. During World War II, for example, the Highway Department presented Montana in ways that expressed the state’s role in providing men and materiel for the United States’ war efforts. This implicitly positions Montana as a critical part within a larger, national discourse about United States identity. 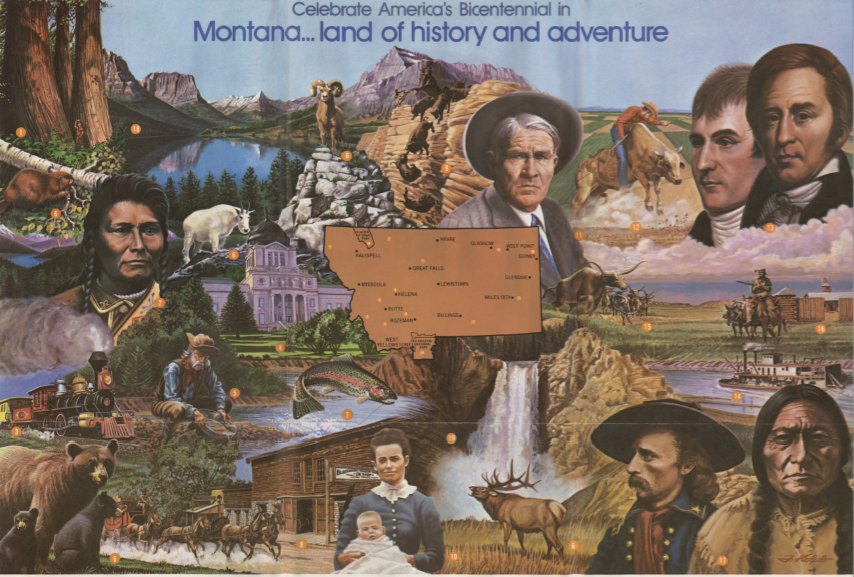 What might be some of the theoretical implications of this study?
There are a few theoretical implications of this study. First, through examining how state institutions like the Montana Highway Department shape ideas about place, we see echoes of James C. Scott’s seminal work Seeing Like A State, which posits that governments impose regulations and standards on societies to make them legible. We think our study echoes and extends some of Scott’s logic, because we see that through maps, the Montana state government is able to present a cohesive narrative about what is significant about the state. Government thus becomes implicated in the process of identity formation.

Second, and relatedly, our study connects with ongoing research at the intersections of heritage studies and geography. Geographers are well suited to exploring how heritage, or a selective framing of identity, is constructed through an array of technologies. Many scholars examine how heritage is constructed through monuments, museums, and performances, and discuss how these are all representative of technologies that are deliberately aimed to help frame and consolidate identity. We use our study to suggest that maps play a similar role.

How does your research help us think about Geography?
Geographers make and use maps, but our research is a reminder that maps can also function to shape popular ideas about place and heritage. By considering official state highway maps as rich cultural texts, we are concerned with exploring one mechanism through which places acquire meaning. Furthermore, by examining maps produced from 1914-2000, we consider how these meanings change over time. Exploring this topic through a Montana case study also means our study represents researching and writing a place-centered narrative. Asking and researching place-centered questions—such as asking what themes are central to Montana place identity, and how do maps convey these themes—are the sorts of questions that set Geography apart from other disciplines.