Article Title, Issue and Volume:
Measuring the Reach of Asian Regional Food Regimes in the WTO Era: Vegetable networks, territories, and the WTO

What is the main purpose of your study?
The main purpose of this article is to employ a relatively new method called “more-than-qualitative relational approach” drawing from geography, and using Social Network Analysis (SNA) to address the Asian regional vegetable trade and its governance in the WTO era.

What are the practical, day to day, implications of your study?
Today the concept “big data” has become a catchy phrase in our society, as data derived from our actions in our daily lives is increasingly accessible. However, there is also a call for reconsidering the meaning of data in order to “make sense” of the data—so-called “thick data.” Hence, what I was trying to do in this article is to address the Asian vegetable trade, the largest scale of vegetables produced and exported in the world, as a case, utilizing an alternative approach of quantitative measurement to visualize and represent the thickness of the vegetable trade data.

How does your study relate to other work on the subject?
I’m among other junior scholars located at research institutes worldwide paving a new approach for analyzing the “contemporary food regimes.” 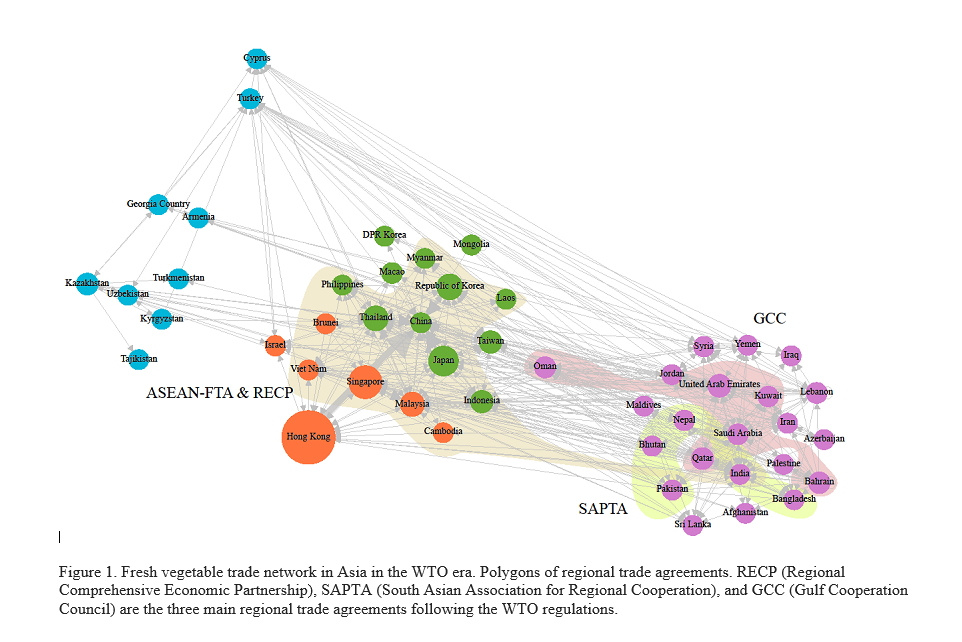 First of all, when discussing contemporary Asia, China is commonly the focus, which is also applicable in the Asian vegetable trade, as China is indeed the “center” of the vegetable trade (being the largest exporter and importer worldwide and in Asia) according to the trade data. However, if we apply an alternative approach analyzing the data with topological thinking—treating the trade not only in a bilateral sense, but a multilateral one–and facilitated by the SNA method, other alternative “centers” might emerge. Examples are Thailand, India, and the United Arab Emirates, which respectively occupy different sorts of central positions in the Asian vegetable trade (see Figure 1).

Second, it is crucial to apply a quantitative method with a more exploratory approach in analyzing the data. In doing so, the division between the qualitative approach and the quantitative approach might be concealed to a certain extent, which is an urgent issue in geography and other disciplines of social sciences and humanities in the “big data” era. 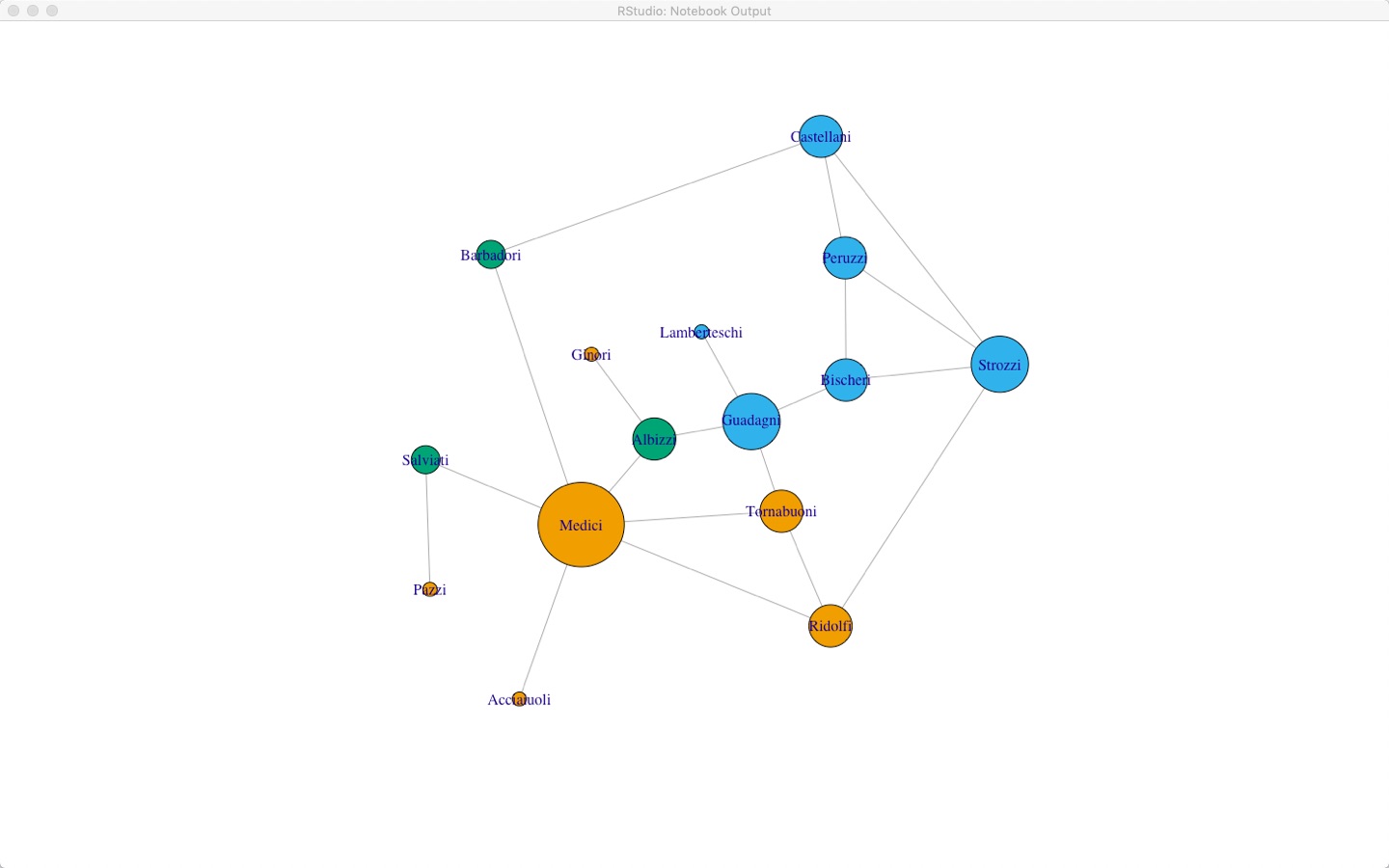 In this article, along with my former publications, my aim is quite coherent–deepening the methodology and conceptual framework of food regime, a classic approach in agrarian political economy. Specifically, I draw on the topological thinking and a more-than-qualitative relational approach from geography to reframe food regime scholarship. 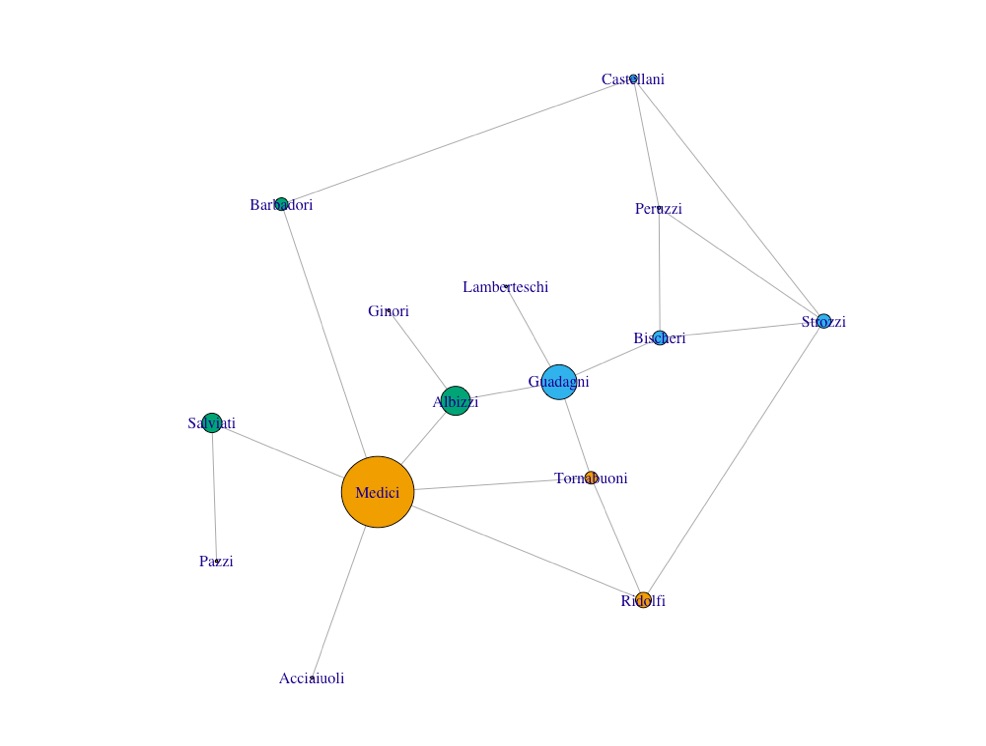 In terms of the method that I applied, the original idea of using (semi)quantitative methods to visualize and measure the topology of power was formulated by Padgett and Ansell (1993, also cited in the article) in their classic research on power networks of the powerful Medici family in Florence. Alongside the power dynamics operated through a center-out relation (based on the connections certain nodes collected, see Figure 2), Padgett and Ansell reveal that new men (new political forces) in Florence were structurally tided in San Giovanni region, and this is the group the Medici mobilized and controlled directly through economic relations. Patricians residing outside San Giovanni, are people the Medici mobilized and controlled through marriage relational networks. Conscious segregations were keys to the inhibition both of independent ties among followers and of multiplex tide with the Medici themselves. The result was that, the Medici themselves were the only bridge holding this contradictory agglomeration together, and through which, the concept of betweenness centrality (Figure 3) was applied to explain the spatial dynamics of power relation in Florence.

How does your research help us think about Geography?
Thinking geographically is always about using the metaphor of space (such as “region,” “regionalization,” and “topology”) when it comes to comprehending our daily practices. Geography as a discipline has long been tackling those spatial issues, while we should not forget that geography is invaluable to address our world, which is changing at an unprecedented pace, because of the tradition of inter-subdisciplinary dialogue between physical geography, human geography, and GIS and spatial modeling that has existed inside geography for centuries.