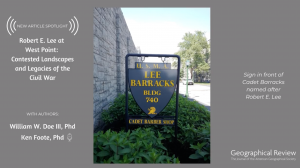 The U.S. is currently experiencing an unparalleled transformation of its commemorative landscapes. Statues and memorials that have stood for decades are being removed. In particular, memorials associated with the Confederacy from the American Civil War are being addressed. The case of commemoration of Confederate General Robert E. Lee at the U.S. Military Academy, West Point, New York, offers a unique perspective on the difficulties of untangling the many legacies of the Civil War that are commemorated in the American landscape. Lee was a graduate of the Academy, a Superintendent, and had a distinguished career as an Army officer, before joining the Confederacy. He became its most prominent and honored General. The evolution of Lee’s landscape commemoration at West Point parallels significant historical events in American society and within the Army over more than 150 years. An examination of this evolution in a broader geographical and historical context is warranted.