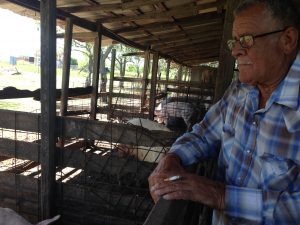 What is the main purpose of your study?
The main purpose of the study is to examine the cultural practice of holding a boucherie, or a group hog-butchering, in rural Creole communities in southwestern Louisiana. Creoles, mixed-race people with African, Native American, and European (usually French) ancestry who today commonly identify as black, use boucheries as a homecoming, a type of placemaking, and as a celebration of their ancestors’ survival and ingenuity. For some Creole families today, boucheries still serve a survival purpose: they provide fresh meat in communities that have black poverty rates as high as 46%.

What are the practical, day to day, implications of your study?
Historical and cultural research on Creole/black people in this part of Louisiana—and, to a degree, across the state more broadly—has been quite limited. Most scholars have focused on Cajuns, the modern-day descendants of the Acadians, and whose impact on the French-infused culture of the area is often overstated. So, another main goal of this research has been to build up the historical and cultural- social scholarship on Creoles so that they can see themselves and their contributions in the history books. It is an opportunity for lesser-known and/or marginalized voices to be heard.
Importantly, this paper also identifies socio-economic deprivation and racism as forces that continue to structure the lives and life chances of black Americans. I want to underscore the point that just because black Americans have created mechanisms to cope with deprivation, such as the boucheries that supplement some Creoles’ diets, does not excuse the actions of those in power who need to alleviate the highly race-correlated poverty that exists in this region and across the United States. 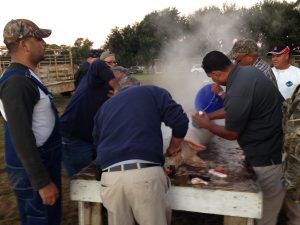 How does your study relate to other work on the subject?
I am indebted to the works of mostly-black scholars whose broad-ranging research examines how spaces are made into places through cultural practices. Hunter, Pattillo, Robinson, and Taylor (2016), whose research I draw upon heavily in the paper, explained how black Chicagoans create spaces of belonging and identity under conditions of socio-economic disadvantage—in essence, transforming “spaces” into culturally-rich and meaningful places in the city through local sports teams and neighborhood reunions. These places, even if they might be temporary, help to strengthen community bonds and ensure continuity of cultural traditions. Likewise, Roberts (2018), beautifully captures how the modern-day descendants of the founders of east Texas freedom colonies use storytelling and other rituals at their family reunions to honor the legacy of their ancestors and pass wisdom along to the next generation. There are a lot of parallels between these scholars’ understandings of black place-based identities, black sense of place, and the cultural activities of Creoles such as the boucherie. 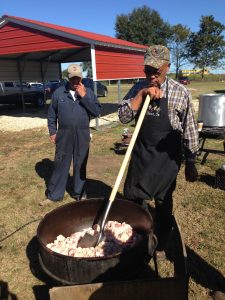 What are two or three interesting findings that come from your study?
It was fascinating to learn about the lives of Creole/black Americans in rural areas. The media is doing a better job these days of showing how varied black lived experiences can be, such as recent features on black cowboys and cowgirls. The majority of the time, though, stereotypes persist about black Americans somehow being “naturally” associated with urban life. For most of the participants in this study, big-city living could not be more different from their experiences riding horses, holding cookouts and boucheries, and raising crops or livestock. It is a segment of American life that we do not hear much about.
This study echoes what Wright (2017) and other black geographies scholars have pointed out—that we need more analyses that challenge accounts of black lives as deficient or characterized by social ills. The boucherie is a celebration for many Creoles. It is a day to honor their ancestors who survived enslavement and an opportunity to pass their proud history, and survival skills, onto the next generation. It’s also fun! There is music, laughter, family, friends (old and new), and more food than you could ever imagine.

What might be some of the theoretical implications of this study?
Led by black geographers such as McKittrick (2011; 2013), Eaves (2017), Wright (2017), and Hawthorne (2019) scholarship in this area challenges geographers to reconsider black identity and place as something fixed or inherent (like, for example, the commonly-held link between the “inner city” and blackness) as well as the opposite, presumed placelessness as peoples without a homeland. Their work, and—I hope—this paper, serves to challenge commonly-held assumptions about black Americans and demonstrates how community members actively create places of cultural endurance.

How does your research help us think about Geography?
To me, what distinguishes geography from other social sciences is its focus on the interconnections between society and space, or the interactions of a cultural group with the natural environment. I felt fortunate that members of Creole/black communities came to trust me enough (over the course of years of relationship-building) to tell me about their cultural-survival practice of the boucherie. It is a quintessential “geographic” study!
Secondly, it is nearly impossible to delve into these society-nature links and not notice the profound inequalities that dictate access to resources and health; consequently, geographers have made issues of justice paramount to their research and teaching. The sub-field of black geographies does this particularly well, and I’m pleased that this scholarship on Creole/black identity and survival can be added to its catalogue.