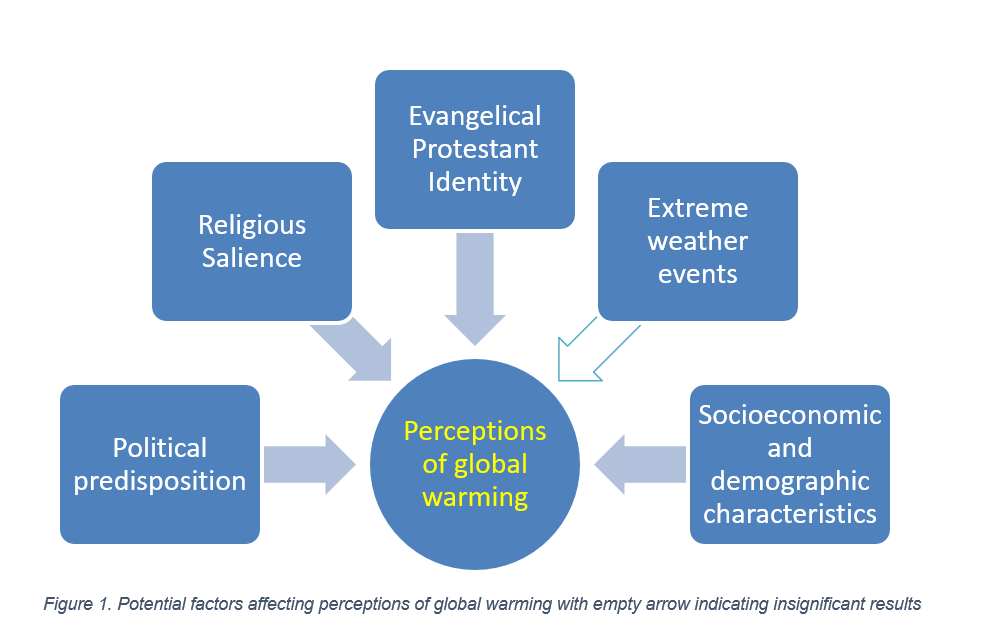 What is the main purpose of your study?
The main purpose of this study is to look at how Evangelical Protestant identity and religious salience as well as extreme weather affect American public attitudes toward global warming over an extended period of time (2006-2016).

What are the practical, day to day, implications of your study?
As one of the most politically contested issues in the American public discourse, global warming presents itself as an interesting case study of American public opinion. The examination of American public views towards global warming over 10 years provides us with some insights into the political, religious, and geographic forces that can work together shaping public opinion of this issue. As one influential religious group, Evangelical Protestants have been active in American politics. Their views towards global warming have exerted enormous influence on the public policy agenda with regards to this issue.

How does your study relate to other work on the subject?
Previous work has examined the effects of socio-demographic characteristics, political predisposition, cultural views, and climate extremes on public perceptions of global warming. Built upon these studies, this study focuses on Evangelical Protestant identity and religiosity over a relatively lengthy period.

What are two or three interesting findings that come from your study?
First, Evangelical Protestants stand out among all the religious groups by being consistently less likely to believe in the existence of and perceive the seriousness of global warming. Their reluctance to accept global warming being an issue is tied to their end-time theology, a belief that the earth has an end-date in which there will be a Second Coming.

Second, religious salience, consisting of importance of religion and the guidance of religion in one’s life as well as biblical belief, leads to skepticism of believing in the human cause of global warming. This suggests religious individuals are reluctant to accept the notion that humans can intervene the divine plan.

How does your research help us think about Geography?
Geographers are on the frontline of studying the relationship between environment and society. As one of the biggest issues facing the entire humanity in the 21st century, examinations of public perceptions of global warming are warranted. Global warming remains to be a contested issue among the American public. Public opinion is one significant force shaping public policies in the U.S. The U.S. withdrawal from the Paris Agreement has sent shockwaves around the world. This study reveals some influential factors determining American public opinions towards global warming. This research helps us gain better understanding of the driving forces of public opinions and illuminate how global warming has become a highly contested issue in the U.S.