Article Title, Issue and Volume:
Working with Financial Data as a Critical Geographer

What is the main purpose of your study?
To demonstrate my methodological approach, which I refer to as “critical financial analysis.” Critical financial analysis blends critical theory with public finance tools. Critical financial analysis can be used to probe how public finance functions as a technology of power, and how particular finance logics can orient public institutions away from their social missions. In the article I provide a grounded example of my methodological approach using my research on the Chicago Housing Authority, which built up a large cash reserve while tens of thousands of people were on its waiting lists for housing assistance.

What are the practical, day to day, implications of your study?
Critical financial analysis is one approach scholars can use to collaborate with non-academics working to address issues of poverty, inequality, and social change, and it can produce information that directly informs political and policy debates. In the article I discuss how the findings from analyzing the Chicago Housing Authority’s finances were used by community organizations and non-profits outside of the academy in their organizing and advocacy efforts, and while not all of the those organizations’ goals were achieved, the Chicago Housing Authority did begin increasing the number of housing vouchers it issued.

How does your study relate to other work on the subject?
Critical financial analysis contributes to urban governance scholarship, and is one approach for blending quantitative tools with critical theory. Fluency with public finance can enable geographers to better understand the discourse around fiscal issues and illuminate the politics around seemingly technical and (sometimes) benign changes in financial norms and practices. The complexity of public finance is why it is vital to look at statements about finance, financial data itself, and the accounting practices and assumptions used.

What are two or three interesting findings that come from your study?
The Chicago Housing Authority built up a large reserve between 2005 and 2014 (shown in the figure below). It did this, in part, by issuing less housing vouchers than it had the financial resources to issue. The build-up of its reserves was largely masked to the general public because of routine accounting practices, which is an example of how taken-for-granted assumptions and norms of public finance can have important consequences for social service delivery. 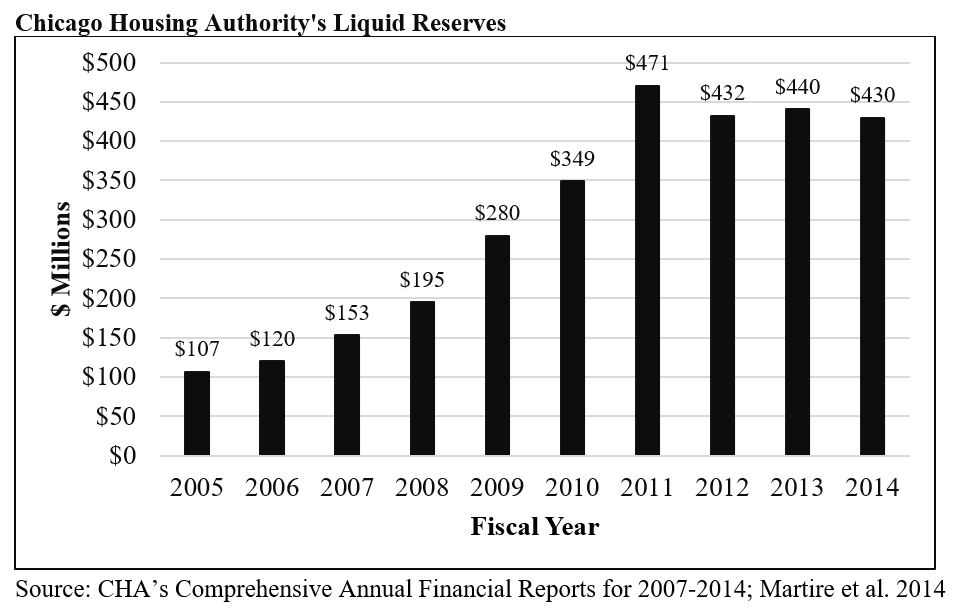 What might be some of the theoretical implications of this study?
Critical financial analysis is one approach that can be used to help fill existing gaps in the study of the finacialization of the state.

How does your research help us think about Geography?
Field sites are often thought of as physical locations, but I suggest that financial data itself can also be thought of as a ‘field site’ through which contested spaces, practices, and power relations can be explored.