Preview was written by Emily Fekete 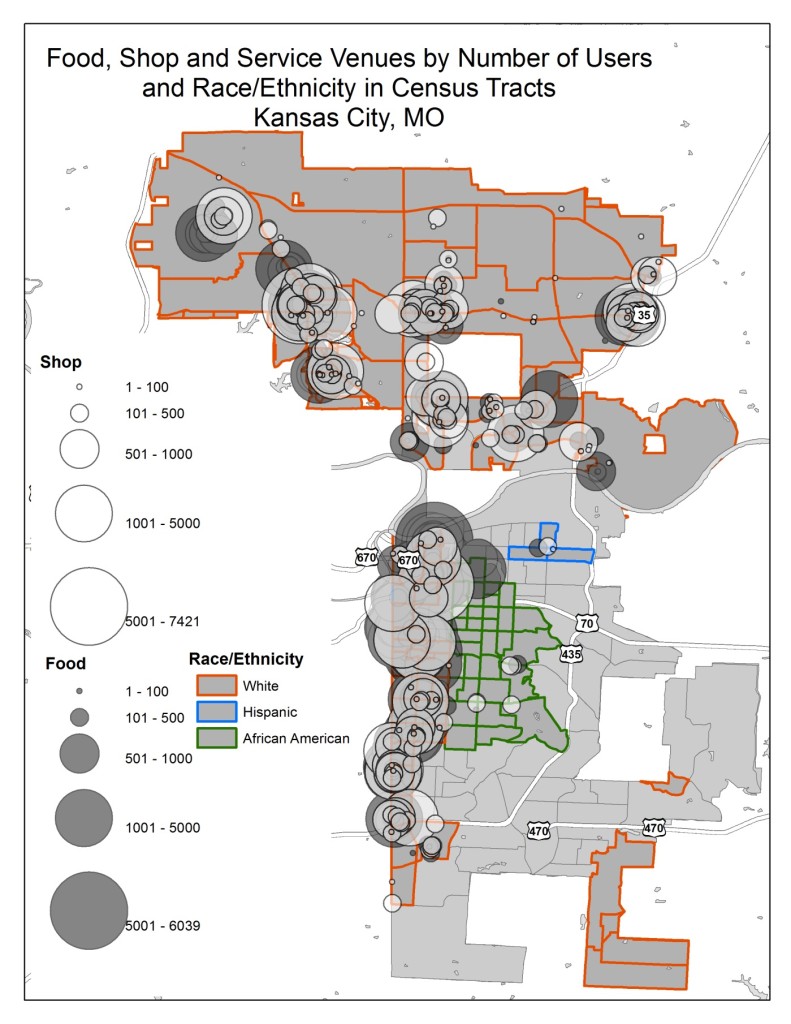 Q: What is the main purpose of your study?
A: The main purpose of the study is to compare the locations of retail establishments and restaurants to demographic data on race in order to determine if there is a bias in the locations of stores and restaurants. The study uses data from Foursquare, a social media platform where users “check in” to their physical location and share it with their friends to map the businesses in a city.

Q: What are the practical, day to day implications of your study?
A: Businesses today need to have an online presence in order to be successful. People often make decisions about where to shop or eat based on reviews of places they read online or on social media sites. Data from social media sites can be used to look at what businesses have online components. The physical locations of businesses on social media can be mapped. Looking at the locations of the businesses that promote themselves online provides a picture of racial bias in the locations of businesses throughout urban areas. Many of the areas of cities where there are no retail establishments with online components are located in predominantly African American census tracts. This has real world implications because if successful businesses do not exist in some areas of cities then the economic vitality of those neighborhoods is threatened. The future success of some of these areas may depend on the economic success of businesses which is increasingly dependent on social media presence and promotion.

Q: How does your study relate to other work on the subject?
A: This study relates to other work about the reproduction of offline racial divides on the internet or social media. Other studies have looked at how Google Maps has more placemarks in white neighborhoods than in African American neighborhoods. It also relates to studies conducted on differences in consumption patterns among different ethnic groups and to studies on food deserts.

Q: What are two or three interesting findings that come from your study?
A: There is a distinct divide between retail establishments listed on Foursquare being located in census tracts that are majority white versus census tracts that are a majority African American. More businesses are located in majority white census tracts, likely because either Foursquare users are predominantly white or because there are a lack of businesses in African American tracts.
People increasingly look to social media platforms like Foursquare, Yelp, Facebook Places, or Google Places to make decisions about where to shop or eat. If businesses are left out of these platforms, people will be less likely to go to them in the future which will hurt the economic vitality of the areas of cities that do not have retail outlets with social media presences. The lack of businesses on these social media sites in some areas of cities also reflects the bias built into the social media site itself. The sites are not necessarily representative of an entire city.

Q: What might be some of the theoretical implications of this study?
A: This study shows the interconnectedness of online and offline worlds. Social media does not just exist online, but has an impact on decisions that people are making offline. Online spaces and offline spaces should not be treated as distinct entities, but rather as a hybrid. People’s actions in online space affect offline spaces and vice versa.

Q: How does your research help us think about Geography?
A: This research helps us to think about the unevenness of spatial distribution and who the people are that are affected by this unevenness.  Goods and services are not evenly distributed in the US which has the potential to adversely affect some populations. This research reveals that it is likely that African American populations are those more often affected. The project points to the geography of consumerism, how social media sites have their own geography that is rooted in offline spaces, and how goods and services are unevenly distributed in the US.