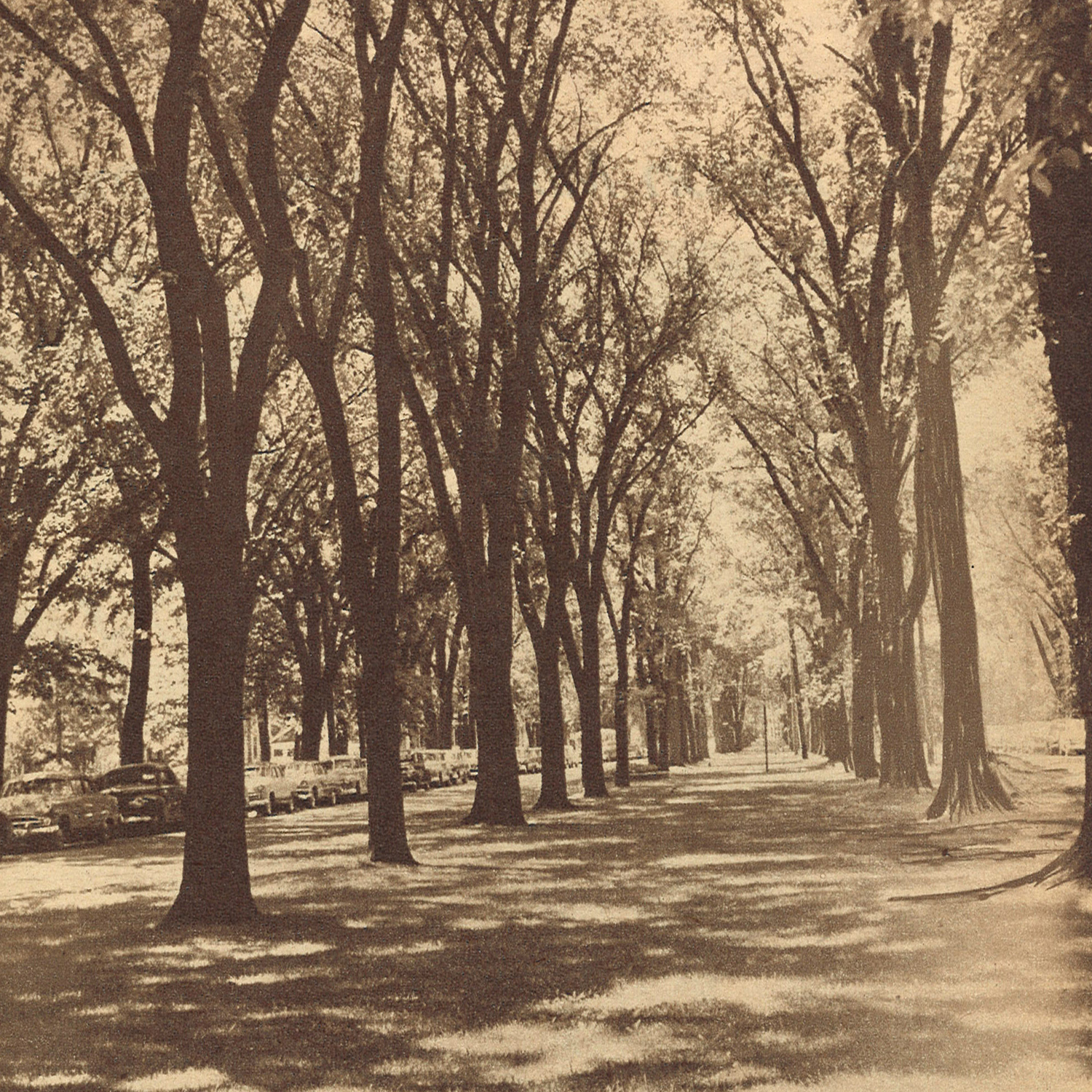 Elms lining Plum Street near downtown Syracuse, as shown in the Syracuse Post-Standard, 1956. The image highlights how ubiquitous the American elm was in the city prior to the arrival of Dutch elm disease. Used with permission of the Onondaga Historical Association.

What is the main purpose of your study?
I wanted to tell the story of the loss of American Elms to Dutch elm disease in Syracuse, while highlighting it as an example of the disparate way we view the urban forest (as an ecosystem) versus how it’s managed (as pockets of private and public property).

What are the practical, day to day, implications of your study?
Urban trees are a crucial part of the environment, providing ecosystem services like shade and carbon sequestration. In a globalizing world, these trees will face more threats from pests. Understanding past management techniques, particularly why those techniques failed, can inform current policy and prevent dramatic tree loss in the future. 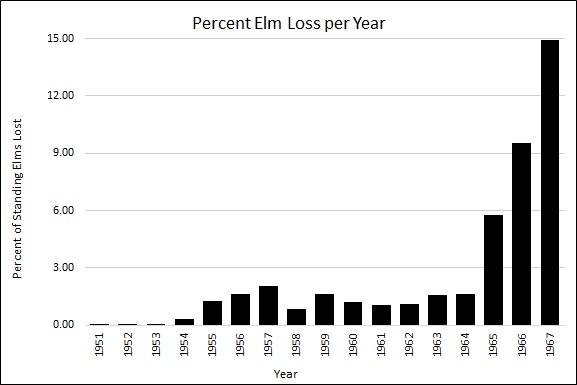 Percent of remaining elm population lost each year to Dutch elm disease in Syracuse, NY. The disease arrived in 1951 but was not actively managed until 1957. A drought from 1961-1965 led to increased losses that functionally ended the city-wide program in 1965, leading to exponential elm loss. Recreated from data compiled by Miller, Silverborg, and Campana 1969.

How does your study relate to other work on the subject?
My biggest goal was to demonstrate the difficulties of managing urban trees in a mixed property context. A lot of urban forest research looks at either private trees OR public trees – which is often a function of data collection (there are, of course, exceptions that use statistical methods or satellite imagery to get an understanding of the entire urban forest). Additionally, the biggest take-away from the loss of elms to Dutch elm disease is that we shouldn’t over plant a single species (if we do, an epidemic could wipe out entire populations). This paper shows that it wasn’t just the ubiquity of elms, but the fact that the city could only maintain management on public lands, that led to their loss.

A timeline notes the important events in the history and management of Dutch elm disease in Syracuse. Management periods and their effect on percentage  of elm trees lost to the disease are based on archival evidence and the graph recreated in Figure 2. Image created by author.

What are two or three interesting findings that come from your study?
The most important finding is that with appropriate permissions and funding, Syracuse was able, for a brief time, prevent catastrophic loss of their elms. Discussions of Dutch elm disease often make the loss of elms sound like an inevitability, that the fungus was unstoppable, and the ubiquity of elm trees made them impossible to save. However, while their high population density definitely contributed to their loss, a well-planned and well-supported management strategy was able to save them, for a while at least. In addition to this, I think highlighting the biogeographic implications of private property regimes is an important idea supported in this case study. Private property acted as a constant source of fungus, and no matter what managers did on public lands. I think this speaks to larger biogeographic discussions of habitat fragmentation and invasive species.

As the city became overwhelmed with the number of elms becoming infected, residents found ways to draw attention to those in obvious need of removal. Shown here, a resident on the northern edge of the city vandalized two dead elms to show their displeasure that the trees were becoming a safety hazard to pedestrians. Photograph originally appeared in the Syracuse Post-Standard, 1970. Used with permission of the Onondaga Historical Association

What might be some of the theoretical implications of this study?
I used the commons framework to explore the ideas above, about the dissonance between how we treat the urban forest as an ecosystem but in reality, it cannot be managed as such due to property rights. I think if more urban forest researchers and managers kept that framework in mind, urban forest management could be more successful because they could focus on tackling that issue right out of the gate in the event of future pests.

How does your research help us think about Geography?
I think my work really highlights the interrelatedness of human and environmental systems. In urban contexts, we can’t separate human decision making’s effects on our environment, including the natural environment. Urban trees, though “natural”, are completely created by the people managing them, including if/how those trees are saved from pests. Geography’s skill as a discipline is in creating scholars that can speak to that interrelatedness – my training in both biogeography and environmental history (including qualitative methods), enabled me to write this paper.

Click here to read the abstract of this article on the Wiley Online Library.