AerialSphere takes 360° aerial imagery over Urban Areas on a mass scale, and uses their unique process to geo-rectify the images. They calculate the latitude, longitude, and altitude of each pixel in the image “sphere,” making the whole thing fully immersive. It can then be utilized as something more than just a photograph, with the possibility of adding GIS data into the sphere. As they say, “Points of Interest, roads, street addresses, schools, churches, parcel data, or any other GIS data point can be geolocated within the sphere.” 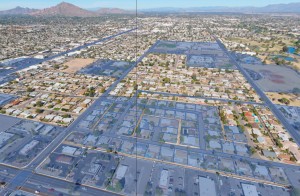 The system that AerialSphere has developed can capture approximately 120 spheres per hour, using wither fixed-wing or rotor aircraft. They typically do these in one-mile increments, which mean that they can capture an entire US urban area of average size in just a few hours. This process takes place at altitudes between 500’-2,000’ and speeds of 110-140 mph.

Here is what co-founder DJ Vegh had to say to the American Geographical Society:

“We feel there’s an obvious use for our system in residential and commercial real estate.  With Virtual Reality (VR) coming on strong in 2015, and even stronger in 2016, it won’t be long before VR begins it’s entry to mass adoption.  People are going to expect to view things in an immersive VR environment, especially when shopping for a new home.  There are already some amazing technologies being developed for viewing the interiors and exteriors of homes in VR. But, for the aerial side of things we know that the current traditional ‘flat’ maps available are going to be lacking.  The ability to visualize GIS integrated aerial imagery/maps is a key element to the success of VR as it relates to real estate.”

Vegh goes on to add, “The world is not ‘flat’ so our maps and imagery should not be either!”