The Armed Conflict Location and Event Data Project (ACLED) is a data collection, analysis, and mapping project. The project provides a free database of “conflict events”, such as military action, riots, protests, terrorist attacks, and other acts of civil unrest, for use either by journalists or for non-commercial purposes.

The American Geographical Society recently spoke with Communications Manager Sam Jones about ACLED’s current work and plans for the future.

The Armed Conflict Location and Event Data Project was created by Dr. Clionadh Raleigh, a professor of Political Geography and Conflict at the University of Sussex in the United Kingdom. ACLED began in 2005 as a doctoral research project focused on Africa. The organization was established as a US-based 501(c)(3) non-profit in 2014.

The project’s mission is to provide accurate, real-time conflict data that is open and accessible to the public. Data is disaggregated, meaning that each event is listed individually rather than statistics by aggregated by location, type, or time period. ACLED researchers collect data from sources including local and international media, new media, and reports, as well as partnerships with local organizations. The Yemen Data Project, for instance, contributes data for the Yemen dataset. The new data is coded and then added to the database each week.

ACLED data is viewable as an interactive dashboard of data categorized by crisis, including events related to the terrorist groups Boko Haram, the Islamic State, and Al Shabaab, as well as the civil wars in Yemen, Syria, and Libya. Users can select a crisis to update the dashboard with aggregated statistics about the crisis by location and over time. These events are plotted on a map along with other visualizations. 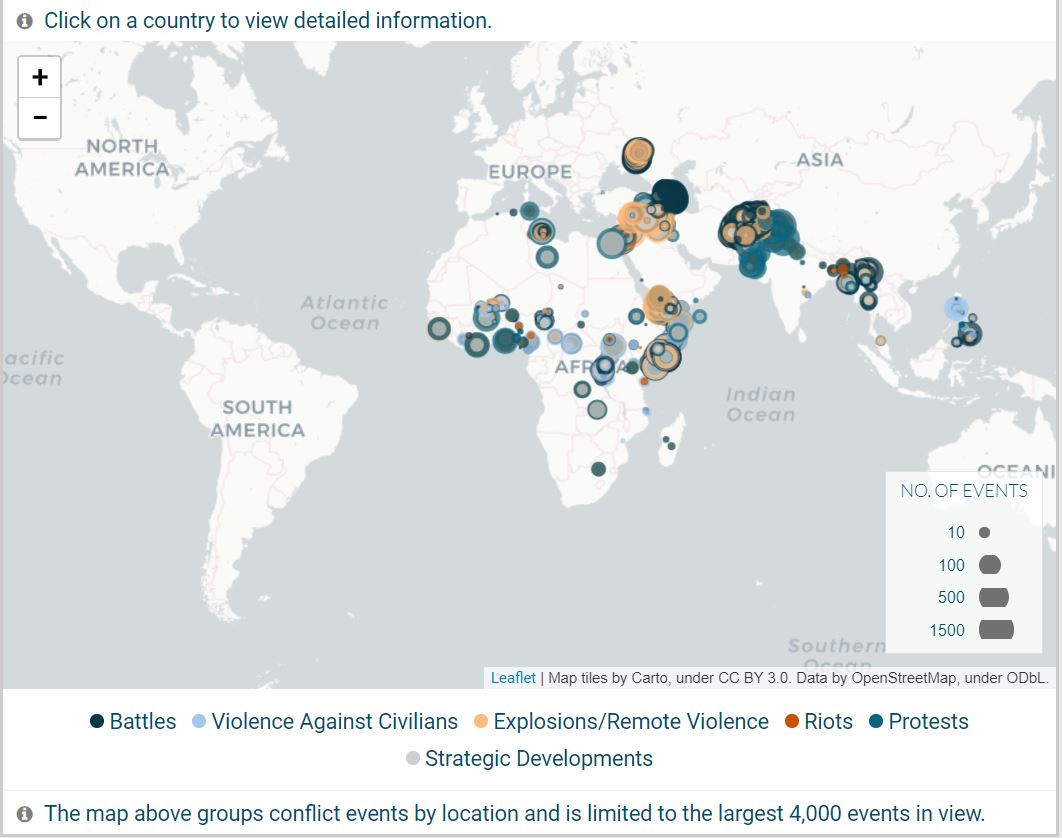 Users can filter and download disaggregated data about individual events using the website’s data export tool. Each event includes a unique identifying code, the information source, a note describing the event, the date it occurred, and the location of the event at the town, subregional, or regional level. Data can also be retrieved using ACLED’s application programming interface (API). The website also includes data files that are curated according to specific regions or topics. 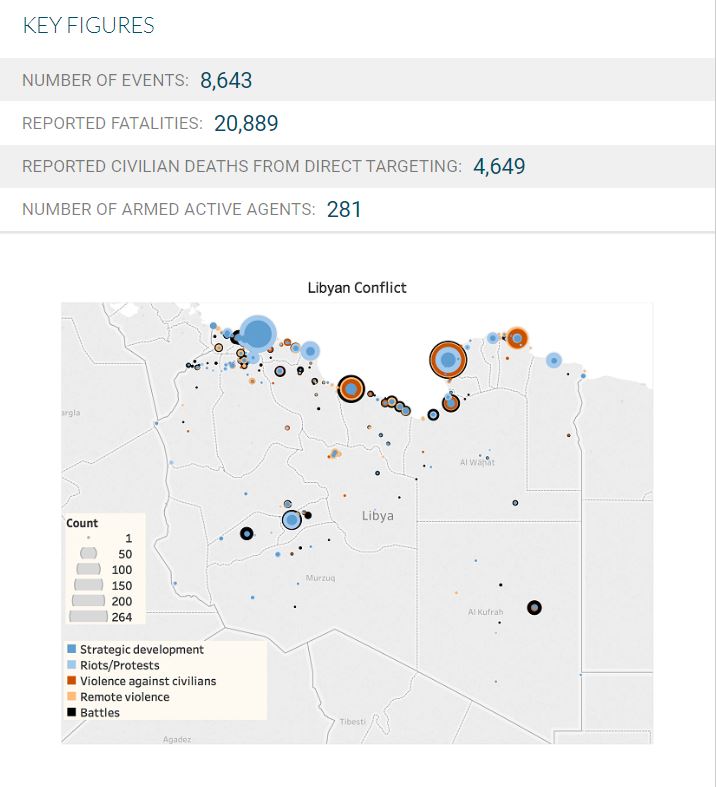 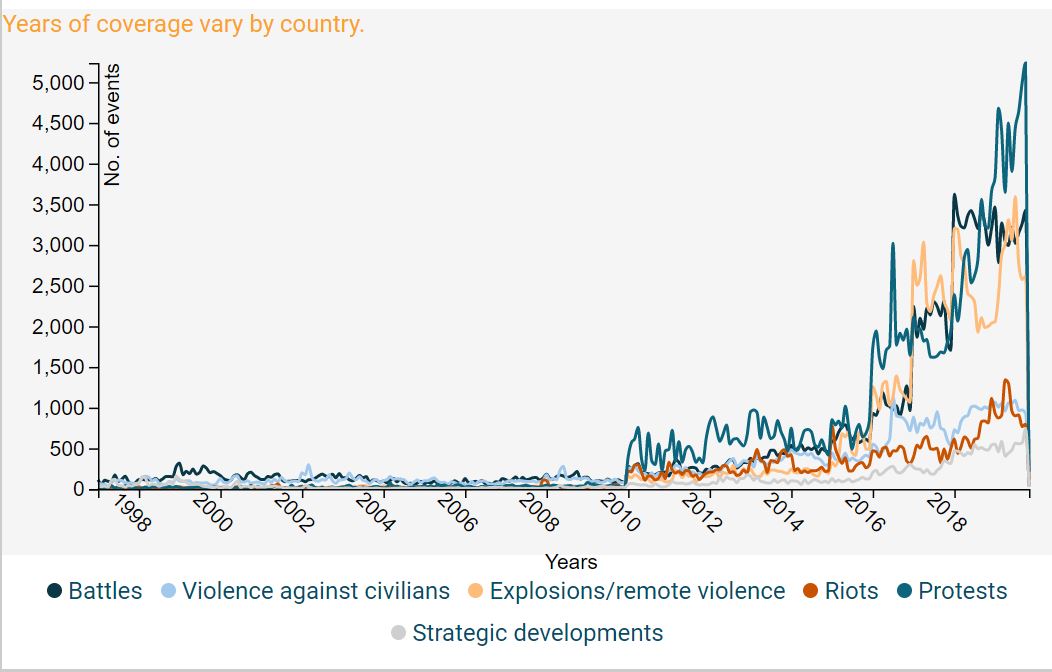 ACLED also uses its data to publish analyses, such as an overview of a region’s conflict for a given time period, as well as infographics.

For geographers, humanitarian organizations, and other researchers, one benefit of ACLED data is that all events are geocoded, or tagged with the location where the event occurred. This, combined with the granularity of the data makes it easier to map trends either geographically or over time. The standard collection and coding methodology also makes data comparable across countries.

One prominent use case is in tracking global violence against women. This year, ACLED’s new data on political violence targeting women was referenced in the Women, Peace, and Security Index, a report by the Peace Research Institute Oslo (PRIO) and Georgetown Institute for Women, Peace and Security. AGS previously wrote about several of the maps published in this report. These data were also cited by António Guterres, General Secretary of the United Nations, to call attention to the problem of political violence against women worldwide.

Another use case is mapping the displacement of refugees. Using ACLED data, the Norwegian Refugee Council linked attacks on civilians to insecurity and the displacement of people driven by conflict in Mali. Similar uses of ACLED data range from the United Nations Human Rights Council report on the conflict in Myanmar to the United Kingdom Home Office profile of Yemen.

The ACLED database currently covers Africa, the Middle East, South and Southeast Asia, and recently expanded to Central Asia and the Caucuses, Eastern and Southeastern Europe, and the Balkans. ACLED is piloting its methodology in the United States, with plans to expand to Latin America, East Asia, and Western Europe in the near future. ACLED also plans to improve its platform by overhauling its website next year, while also introducing new data tools that will make it easier to map thematic trends such as to map thematic trends, such as attacks on journalists, aid workers, hospitals & schools.

With all these developments, ACLED is well on its way to bringing clarity to crisis.