Headquartered in Washington D.C., the Economic Innovation Group (EIG) is a bipartisan public policy organization committed to creating a more dynamic economy, working with policymakers and developing research at the intersection of economic and geographic issues. Kenan Fikri, Director for Research and Policy Development, spoke with AGS about the work of EIG and their mission of forging a more dynamic and inclusive American economy–and how geography factors in at the core of their efforts.

Fikri explained how national and local economies alike need to evolve to survive and thrive, and that economies must become dynamic. “Economic dynamism,” is what Fikri described as, “the rate of churn and change in the economy, or the rate of the economy’s evolution.” EIG’s work looks at how the conditions that foster economic dynamism and resilience vary geographically, and what policy can do to boost the prospects of lagging regions. Since EIG does not have member companies, Fikri notes how the research group has the ability to be “free agent advocates” for innovative new ideas. They convene leaders from public and private sectors and develop research that can advance policies and promote job growth, investment, and dynamism in target communities. 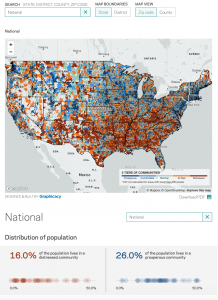 Explore how your community performs on the Distressed Communities Index by clicking on the interactive map.

Coming out of the Great Recession, everyone in D.C. had a hunch that national indicators of economic recovery were growing increasingly divorced from the continuing struggles of scores of American communities, but there was no real data to capture what was happening at a sufficiently fine-grained geographical scale. In response, EIG created the Distressed Communities Index (DCI), finding economic growth throughout the country has failed to prop up the most vulnerable communities. The DCI ranks all zip codes in the United States on seven complementary measures of economic wellbeing to show the massive gaps in economic security across the country. Over the course of the 2010s, almost all job creation in the United States occurred in zip codes that were already prosperous, while zip codes that were economically distressed saw nearly no net job creation at all over that decade.

EIG shares their research with partners in Congress. Their work has informed investment incentives encouraging private investment in struggling areas, with one notable outcome being their Opportunity Zones tool being enacted in the Tax Cuts and Jobs Act of 2017. EIG also tracked long-term population decline in terms of the prime age of the workforce across the U.S. They came up with the idea of a “Heartland Visa” in which policies could encourage immigrants to take up residence in parts of the country that are experiencing population decline. Fikri explained how data suggests immigrants are about twice as likely to start a business compared to native-born Americans, and many of America’s most successful businesses were founded by immigrants. Promoting immigration in these areas could help spur economic development.

During the Covid-19 pandemic, the group realized the increased and accelerating need for real-time data analysis. People were interested to know what was happening nationally and within their local communities in real time. Because economic geographers are used to operating under fairly long data lags, EIG had to come up with more effective ways of gathering data quickly to meet demand. Looking to the future, Fikri is excited to see “if and how remote work changes basic economics of cities” and the opportunities that will likely be created elsewhere. He believes cities have immense value socially and economically and looks forward to producing more research with EIG on how they will evolve.