Physical changes to roads, terrain, buildings and more can occur at any moment and affect a vast array of things. More important than fresh maps, are fresh maps that know what’s changed so that’s why it’s important to be able to keep track of them. Hivemapper, a mapping software company based in Silicon Valley, is helping clients visualize and classify changes and much more through their maps.

Hivemapper started as an Android app called “Waze for Drones” back in 2015. Its aim was to provide DJI drone users with helpful map information by gathering available sources of 3D data. Insufficient available data led Hivemapper to create a platform that allowed users to record videos that   are transformed into 3D maps. Eventually, Hivemapper decided to focus entirely on their data platform and the company formed into what it is today.

Ariel Seidman, the CEO of Hivemapper, has focused on making Hivemapper easy to use and adaptable to the consumer. “When we first started we thought customers would want the map we created, but what they really wanted were the tools we had created to build the maps, so they could build maps wherever and whenever they wanted” Seidman told us.

Indeed, the company helps users create functional maps that meet their needs. In order to build a map, a user visits the Hivemapper site. Then, they upload aerial footage from a drone, helicopter or other air-borne platforms onto the site. Via a fully automated process, a 3D map is generated and the user can dive into their map however they like. These steps are all done through a user’s browser, which makes the map building experience easily accessible.

Hivemapper’s goal is to democratize mapping through easier map generation and map analysis. Sometimes, data to make a map for a particular region may not exist. Through Hivemapper, a user can be located anywhere in the world and build a map through aerial footage of an area that is relevant to them. This makes map generation easy. Further, Hivemapper tries to make geospatial analytic tools easy to use. In doing so, they hope to empower people to make their own maps.

One of Hivemapper’s core technologies is Change Detection. 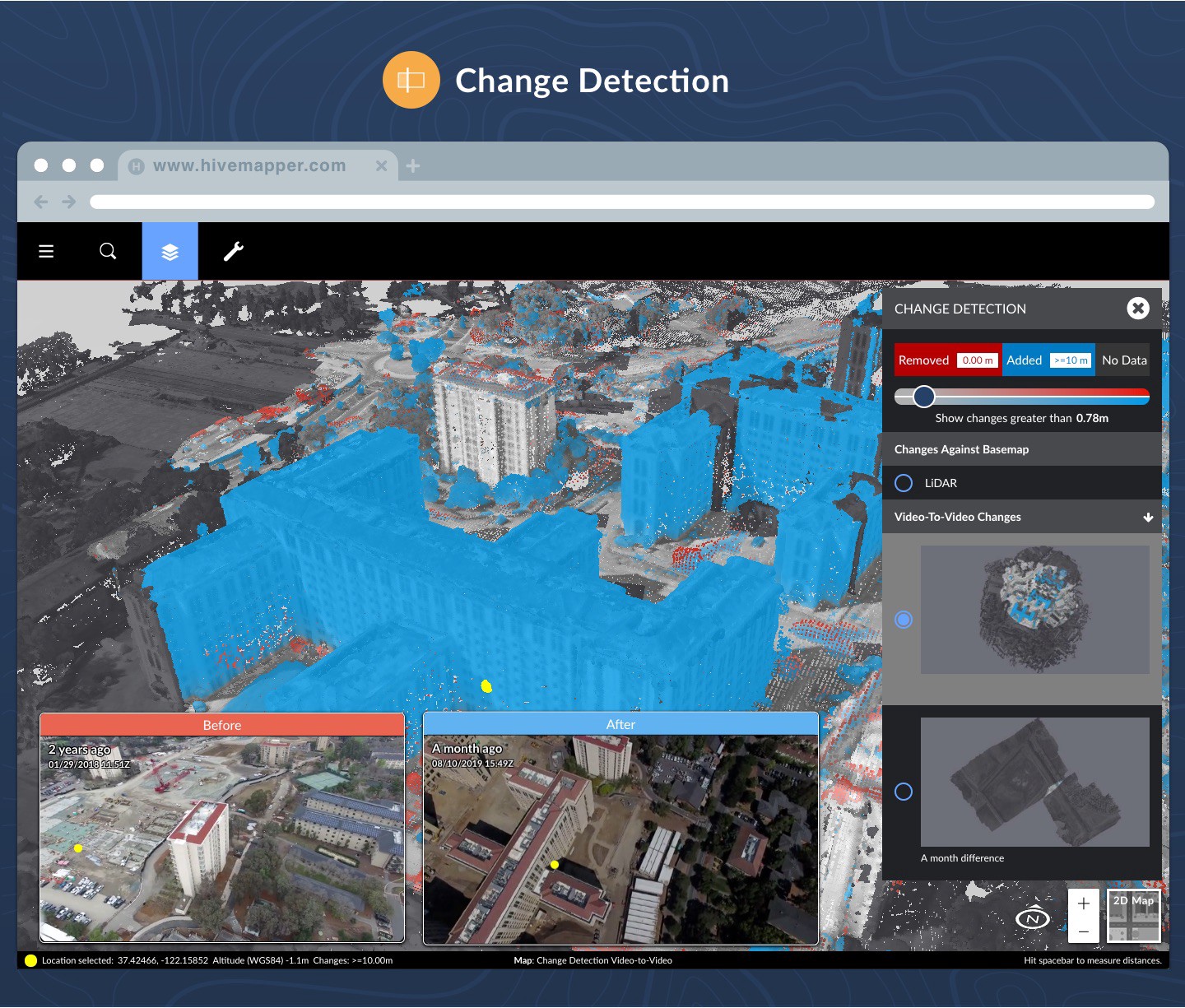 Change Detection is a map feature that automatically detects any addition or subtraction of physical volume in the real world. By rendering two sequential 3D maps of a chosen area, Hivemapper can identify where a change has occurred. Further, the feature can identify changes such as land erosion or the construction of a new building.

Change Detection is a valuable resource that can help people in a wide variety of professions. Urban planners can visualize if an area needs more vegetation. Gas and Oil companies can determine whether their pipelines are exposed to unreported construction or fallen trees. The potential is endless.

While Change Detection isn’t a feature that is new to the mapping industry, the way in which Hivemapper executes this tool is. Hivemapper identifies the changes in 3D as opposed to existing 2D change detection tools, which are more common. 2D change detection has limited capabilities in tracking changes since it relies on pixel vs. pixel comparisons (i.e. has a color changed in this part of the image). As a result, factors including sunlight, filters and more can lead to a surge of false-positives in changes detected. By using 3D mapping, Hivemapper can identify changes based on geometric differences. This frees up users to compare a morning vs an afternoon flight, low altitude vs high altitude, color video vs infrared, and more. This flexibility makes the changes captured far more accurate than those detected by 2D tools while still giving users and pilots the ability to work with any and all of their videos.

Another unique trait about Hivemapper’s Change Detection is the fact that it does not restrict users to using the same camera and angle for video and image collection. Current change detection tools force users to continue collecting data through the same methods they used for their first data collection. This can prevent users from upgrading to better collection options i.e. using a new camera or drone. By being restricted on data collection methods, users may not be able to generate the solutions they need from change detection.

Hivemapper users have the ability to filter and sort any changes on their maps as well. 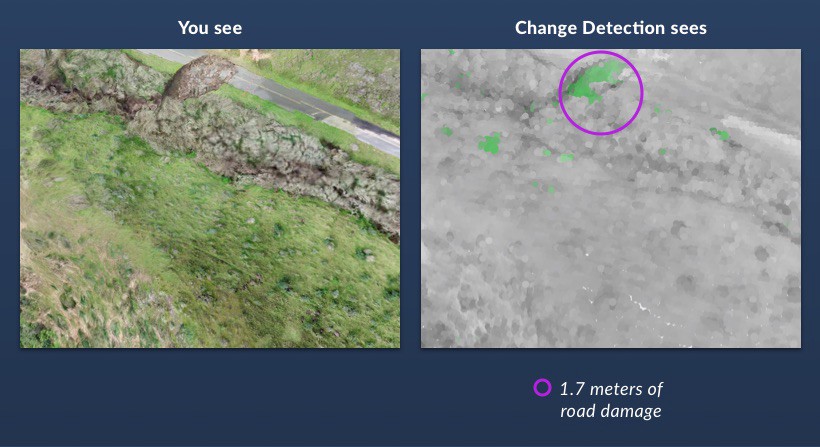 Recently, Hivemapper released a new feature known as Object AI. This particular tool has the ability to automatically classify and segment objects into seven classes including vehicles, trees, buildings, terrain, and more. By combining Object AI with Change Detection you can hone in on the exact kind of change you care about. You can filter out vegetation and cars to focus just on changes to buildings and roads. This ability allows people to focus solely on changes that are important to them or their industry. For example, a city manager may only want to look at the difference in parking zones between two dates to understand parking challenges. These changes make no difference to a construction planner, who would want to observe how or if a natural disaster has affected their construction site.

Perhaps more important is the fact that Object AI can help users identify classes of changes faster than ever before. Users’ maps often tend to focus on a large region. Hivemapper generates high-resolution 3D maps that automatically refresh with new information that can help a user quickly differentiate between objects that concern them. Timing can make all the difference for an insurer who is trying to help provide claims for their clients after a disaster.

In order to accomplish this, Hivemapper conducts image segmentation of an area by using a semi-supervised convolutional neural network. Object AI can then leverage the multiple views available within a video to build a fully segmented 3D map of the region. Through machine learning, Object AI can accurately identify a given object into one of the seven classes. 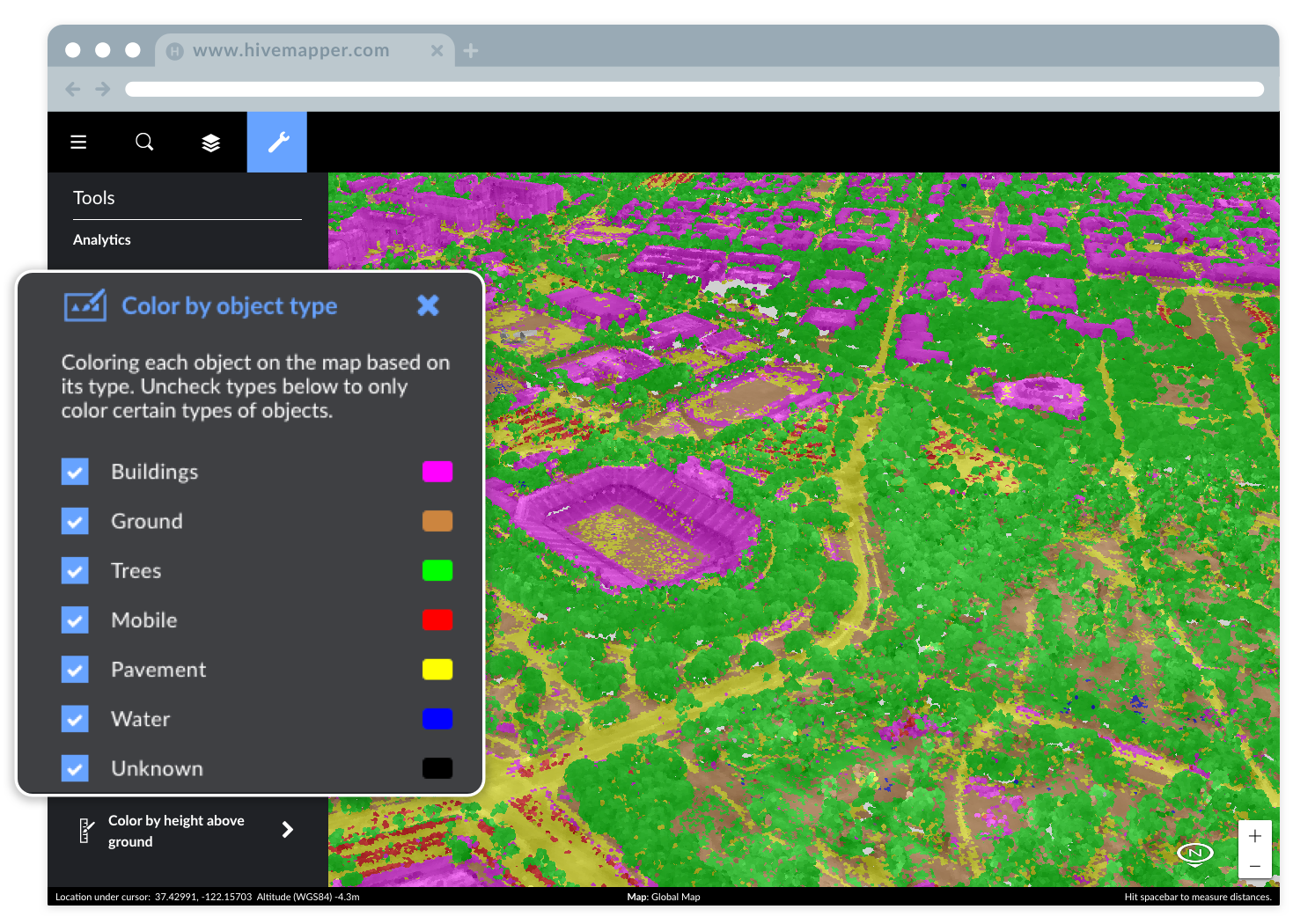 Looking into the future, Hivemapper plans to release Hivemapper Timeline in 2020. Clients would be able to use the timeline to compare changes with more temporal granularity than currently exists. Ultimately, a user would be able to compare changes in any two weeks, months, or whatever time they wish. With Timeline, you can now easily view and compare the differences between any two dates from when you flew your drone over an area to create a map. For example, builders can easily track the progress of their construction sites over time. The environmental protection agency can have a database to track the cleanup after a natural disaster.

Hivemapper’s current and future projects show that the company will be significantly impacting the mapping industry for years to come. To learn more about Hivemapper visit their website, Facebook, and Twitter.

One thought on “Company Spotlight: Hivemapper”