Understanding stories about historical events, change over time for that matter, can sometimes be difficult. Ask yourself when was the last time that you read a history piece, and how useful a spatial reference could have been? And even better, how useful would it have been to have a spatio-temporal reference that visualized the change over time? Without such a spatial reference, it can be especially difficult for an audience to fully grasp the context of an event. Although the widespread need for geospatial data is clear, most often historical pieces offer only textual explanations for events, while neglecting to provide spatial context. This issue has long been a problem for students as well as professionals, who seek to gain full understanding of an occurrence, but are limited by how much they can read without feeling the need to reference a map or image.

Chris Tucker, the founder of MapStory.org, experienced this problem when he was a student in the 1990’s at Columbia University. Recognizing that words on their own can’t provide spatial context as efficiently as a map does, Tucker was looking for another way to understand the world by creating links between spatial locations, moments in time, and stories. But, the technology of the early 1990’s did not make such a vision possible. As such, it was not until 2011 that Dr. Tucker founded MapStory, a project he has described as the “atlas of change that everyone can edit” – a free online editable atlas, akin to Wikipedia as the free online editable encyclopedia. The goal of MapStory is to allow people to organize and share knowledge about the world, spatially and temporally.

Like Wikipedia, MapStory is a crowd-sourcing platform, meaning that anyone can make an account and contribute to this revolutionary knowledge database. MapStory offers an architecture for participation that generates the interaction of users to create better, more accurate maps and stories. MapStory has a very low barrier to entry. You do not need to be a geographer in order to contribute, picking from existing spatio-temporal data (what MapStory calls StoryLayers) uploaded by others to tell your own story. The opposite is true as well. You don’t need to be a star storyteller to contribute your knowledge to MapStory, and can use your geographic or cartographic skill set to create complex spatio-temporal datasets for others to tell stories with. With only basic computer skills, a MapStory can be created that is concise and easily understood. There will often be other users contributing StoryLayers that could be useful to your story. There are various tutorials in the “get started” web page that show you just how to display your data on MapStory, and a shallow learning curve allows you to make marginal additions to other people’s data sets or create your own very quickly.

Crowdsourcing features of the site also allow users to message another user to critique each others’ data (StoryLayer) and to edit each others’ StoryLayers to make them more complete and accurate. These social mechanisms allow people to continuously improve data that is on the site and facilitate a more reliable platform for education. In this way, MapStory enables passionate information communities to collaborate in the creation of grand final products, building what will be seen as a complete story that includes textual and multimedia information as well as spatial data. 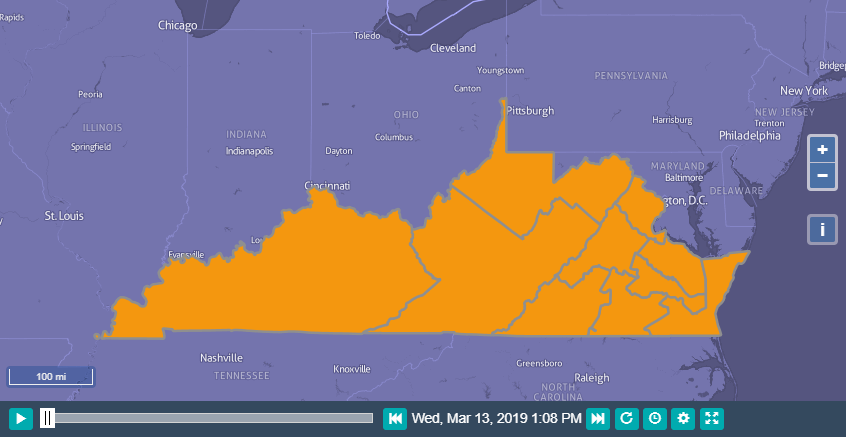 For example, in this map, an animation of Virginia Congressional Districts since 1789 is displayed. With the addition of an interactive StoryLayer like this one to a MapStory, a user can then add prose that explains the sources of each boundary change over time. Additionally, all of the information on MapStory can be readily downloaded and used, making the platform an easily useable and shareable knowledge base.

After a recent technology upgrade to its core platform, the MapStory team is now focused on re-engaging with various passionate information communities that have contributed to the site in the past to encourage them to harness the new features. Users from around the world can hop on the site to contribute their StoryLayers and MapStories, and share with the rest of society what stories they want to tell. You didn’t hear it here, but keep an eye out on MapStory’s site for a new story that shows the history of beer breweries around the world!

In the end, MapStory is a community, not a company. It is an open educational resource where the information on the platform is under an open license. Although similar to Wikipedia, MapStory goes beyond data and allows many interpretations and stories to be told from the same underlying data. In the words of MapStory founder, Dr. Chris Tucker, “If a picture is worth 1000 words, then what’s a map worth? And an animated map, at that!”