“Navteca is a woman and minority-owned technology services company focusing on emerging technologies and IT innovation, like cloud and virtual reality.” https://www.navteca.com/about

The American Geographical Society recently spoke with Shayna Skolnik, co-founder, and CEO of Navteca about their most recent projects.

What is virtual reality(VR)? A computer-generated simulation of a three-dimensional image or environment that can be interacted with in a seemingly real or physical way.

Navteca works with the Science Mission Directorate (SMD) and the Information Technology and Communication Directorate (ITCD) at Nasa, on how virtual reality can be used for scientific data visualization. Nasa has used VR in the past to train astronauts for space missions, but VR can go far beyond training. Navteca is experimenting with VR and how it could be useful for Earth Science. Looking at data that are used for disaster applications, like hurricanes, fires, and floods.  While using 3D data, VR allows you to go inside the data and look around the data scene from a spherical point of view. This environment allows you to experience scale and depth from a new perspective. Rather than looking at the raw data, VR visualizes those numbers, giving you an impression of the 4th dimension.

Navteca is working with satellite data, model output data, and different types of geospatial data that focuses on disasters. Below is a 3D model that Navteca produced by San Juan Puerto Rico, it shows the impact of flooding from Hurricane Maria, from there they were able to simulate flooding at different category hurricanes. By measuring the outcome and disaster level of natural disasters, these models help to develop enhanced decision tools, they have the power to help people make better decisions while using data. With VR you are able to go into the 3D data scene, and actually look at what flooding at the different categories physically looks like. 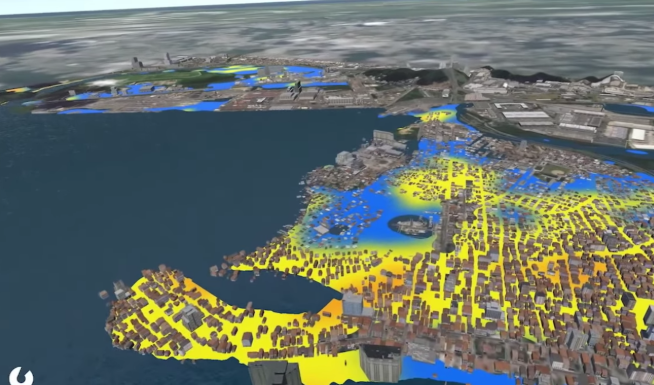 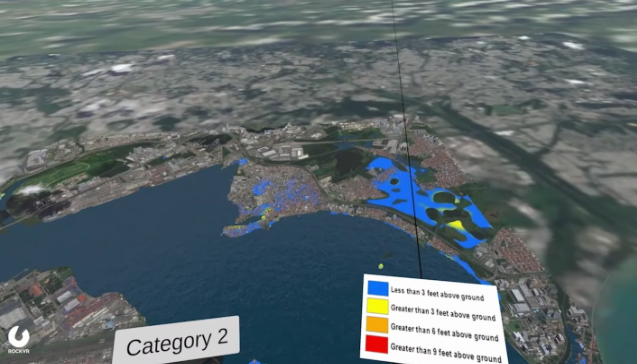 Although some may view emerging technology as isolating us further from one another, VR has the ability to bridge the gap between people who are physically far away from each other. We can use VR to drive empathy for social causes, by putting people in the same space as someone in a different realm than themselves. For example, by placing someone in the center of a refugee camp that would otherwise have no concept of what it could be like. It drops the barrier between humans and opens up an opportunity for conversation on both sides. As you can see, VR is not only used to solve problems in our earth system, but it can also help people come together who are physically confined by space and time.