It’s no secret that geospatial technology is a growing field with numerous industry applications. However, despite its prevalence in the world, many individuals are not aware of its impact on our daily lives. American Geographical Society (AGS) had the opportunity to talk with Adam Simmons from Project Geospatial, a non-profit organization with the goal of filling the global gap in geospatial knowledge. Project Geospatial primarily focuses on podcasts dedicated to increasing the awareness of geospatial technology, industry practices and community resources. The platform’s journey started as a YouTube series and Google+ blog page founded by Adam Simmons, Andrea Simmons, and Mason Rothman. In the past 2 years, Project Geospatial’s podcast skyrocketed, gaining a wide audience base that even includes government officials and military personnel. With its growing number of listeners, Project Geospatial is making its mark on the technological history of geospatial intelligence. 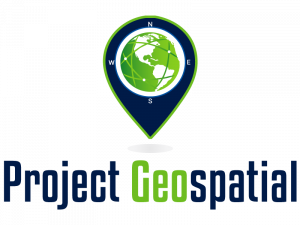 Founder Adam Simmons had several inspirations that led to the creation of Project Geospatial. The first major influence was his time in the United States Air Force where he started a brief podcast series called Key Links. The series, which focused on applications of geospatial technology, ended after three episodes but was largely successful. The success helped inspire Project Geospatial’s platform, content, and ultimate launch.

Once Project Geospatial was formed, the platform This Week in Tech (TWIT.TV) also helped influence the formatting, editing and style of the podcasts. Simmons was heavily inspired by TWIT.TV and utilized what he learned to optimize Project Geospatial’s distribution plan and viewerbase. When discussing the platform’s Search Engine Optimization (SEO) score, Simmons said, “It’s not about the direct user base, it’s about the distribution,”. meaning Project Geospatial’s success has largely been due to marketing efforts to make the website and material more readily discoverable. Simmons has also adopted distribution practices and technologies from gaming and entertainment industries which has helped expand the website’s reach. As a result, Project Geospatial has achieved a Search Engine Optimization score of 85.

In fact, Adam Simmons believes that improved distribution may help expand awareness of the geospatial industry as a whole. When asked about how geography can be brought to a wider audience, Simmons added that social networks, “fringe” geographers and industries that use geography supplementarily, such as agriculture, medicine, energy and transportation, can be key parts of expanding the community. By improving the geographical content taught in schools and expanding university geography departments, students, and researchers may be more likely to utilize geographical principles and technologies. In the future, Simmons believes that the geographical field will likely move towards artificial intelligence and machine learning. Through a “democratization of satellite imagery”, geospatial companies will be able to improve commercial thinking and a “living atlas” of geographic information will be made widely available to the public.

What does this mean for young adults and professionals in the geography field? Simmons recommends that students in the geography field expand their list of potential employers and don’t limit themselves to just one role, company or career path. Students should expand their knowledge by attending networking events and conferences and recognize that there are more opportunities available than one may realize. Young professionals have the potential to bring fresh ideas and talent to the geospatial field, a concept that Project Geospatial touches upon in various episodes.

Simmons’ experience in sharing geographic and geospatial information with a wide-array of online viewers was paramount when AGS had the opportunity to partner with Project Geospatial last November to bring our annual symposium, Geography 2050, to a virtual stage for the first time. Simmons led video editing, production, and digital dissemination efforts and played a key role in bringing Geography 2050: The Future of the World Ocean to a global virtual audience and making the event a success.

When asked about his favorite episodes (aside from Geography 2050, of course!), Simmons said that he looks forward to the next interview because of its potential to grow further depth in understanding the geospatial community. Simmons current favorite projects are “Journey of Where”, a massive upcoming documentary series focused on the history of geography, and “SAR 101”, a project dedicated to the applications of cutting edge geospatial technology. In addition, Simmons loves interacting with guests on LateNightGeo, an open invite series for anyone to come on to talk about geospatial topics and projects. Take a look at some of Project Geospatial’s recent releases: