Industrial activities such as mining and oil spills have long altered terrestrial and aquatic environments, and the damage can be partially blamed on a lack of equipment available to monitor the effects of those activities on ecosystems and [animal/human] populations. However, recent technological advances have made it possible to analyze the extent to which people have depleted and deteriorated natural resources. Remote sensing and geospatial technologies now let us pinpoint where things like overfishing are happening, along with their magnitude, and SkyTruth, a geospatial firm based in West Virginia, is using the data collected with these innovations to work toward ending unsustainable industries and promote environmental awareness.

The American Geographical Society recently interviewed John Amos, president of SkyTruth, to speak about the company’s current and past projects as well as the role that geography and geospatial technology have played in the growth of his company, whose goals are aimed at conservation and inspiring environmental stewardship.

Mr. Amos said that at the core of SkyTruth is the concept that a picture is worth a thousand words. His company makes the data they collect with satellite imagery publicly available so that people can become “more emotionally involved” in assessing the environmental threats posed by offshore drilling and other industrial activities. SkyTruth uses remote sensing data to show environmental degradation in the hopes of bringing citizen activists, policymakers, corporations, and governments to join the company’s cause.

SkyTruth was actively involved in using satellite imagery to assess how much oil spilled during the 2010 BP Deepwater Horizon explosion in the Gulf of Mexico. It created the Oil Spill Tracker in 2010 with support from the Ocean Conservancy and Surfrider Foundation to crowdsource incident reports from citizens and organizations, including text and images as well as links to other sources tracking the oil spill. Prior to its retirement in 2017, the company displayed the more than 400 submitted reports on an interactive map accessible to all online users. Citizen contribution through this platform played a role in ensuring that cleanup operations in Florida were not prematurely suspended. 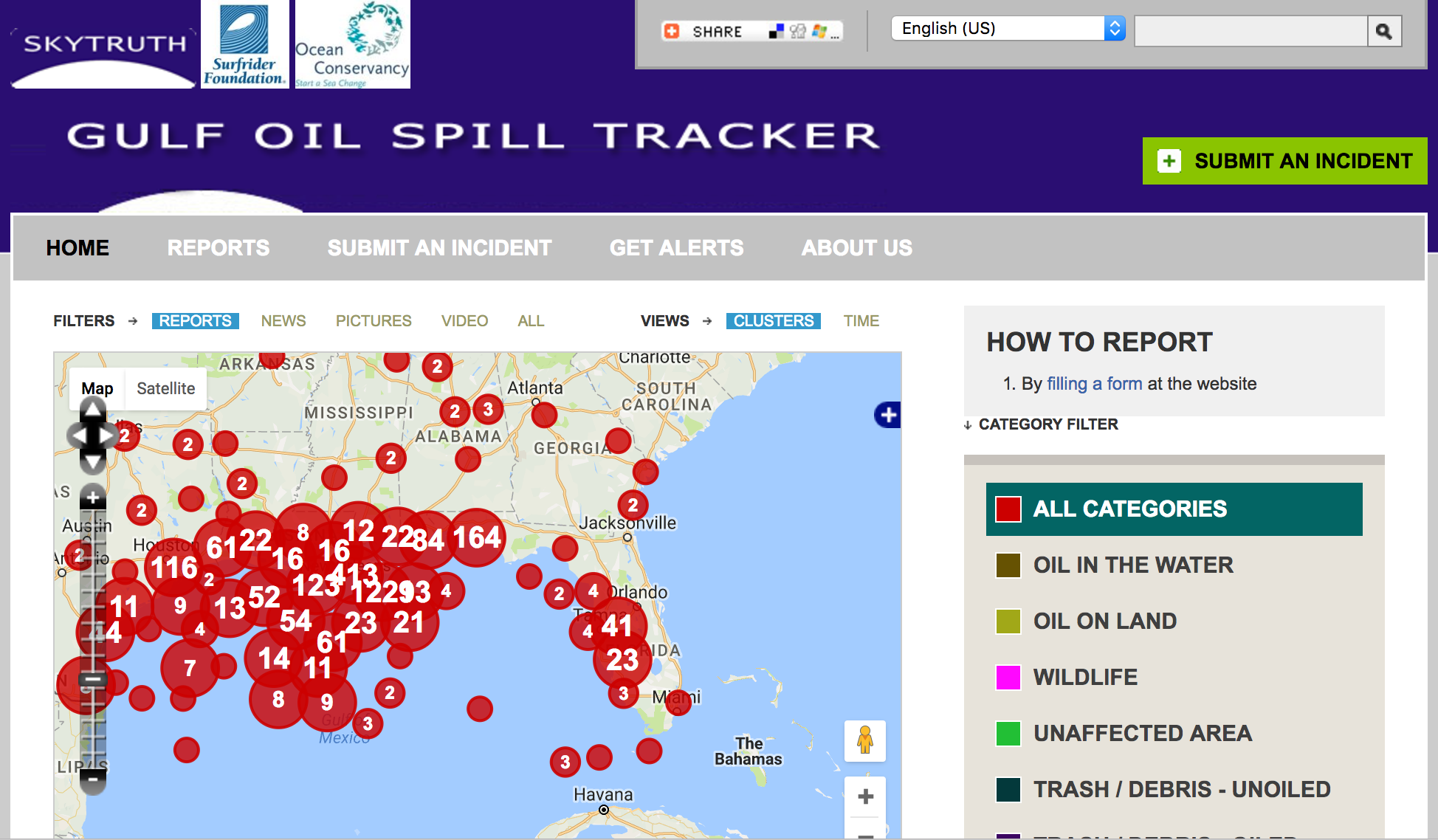 SkyTruth, along with Oceana and Google, also launched Global Fishing Watch (GFW) in 2016 as a free and open platform using remote sensing to track commercial fishing activities. It serves as “the world’s first dynamic, global, near real-time measure of fishing activity” and was designed to help in the reduction of overfishing and illegal fishing. The platform works by taking low-resolution satellite radar images to detect the presence of ships at sea based on radar reflection from their metal hulls. This reflection is then combined with radio signals broadcast through the Automatic Identification System (AIS) which identifies the ship, its estimated travel speed, and its location coordinates. The analysis for the data displayed on the GFW website’s map is then run based on radio signals and satellite images.

Along with these projects, SkyTruth has used remote satellite imagery to fight against hydraulic fracturing, or “fracking.” In 2013, the company launched FrackFinder, a crowdsourced initiative to map oil and gas well pads in which multiple volunteers were consulted to determine the presence of well pads on selected images taken across the US. In April 2017, Maryland Governor Larry Hogan signed a bill that reinstated a fracking ban, making Maryland the third state in the country to ban fracking (along with Vermont in 2012 and New York in 2015). Lawmakers evaluated various studies which revealed that there are both environmental and human health consequences associated with fracking. Research conducted at Johns Hopkins University found that premature birth rates are higher among mothers living near fracking sites in Pennsylvania, and people with asthma who live near these natural gas drilling sites are more prone to asthma attacks. This research relied on gas and oil infrastructure data generated by SkyTruth, meaning the company’s work contributed to this statewide decision. 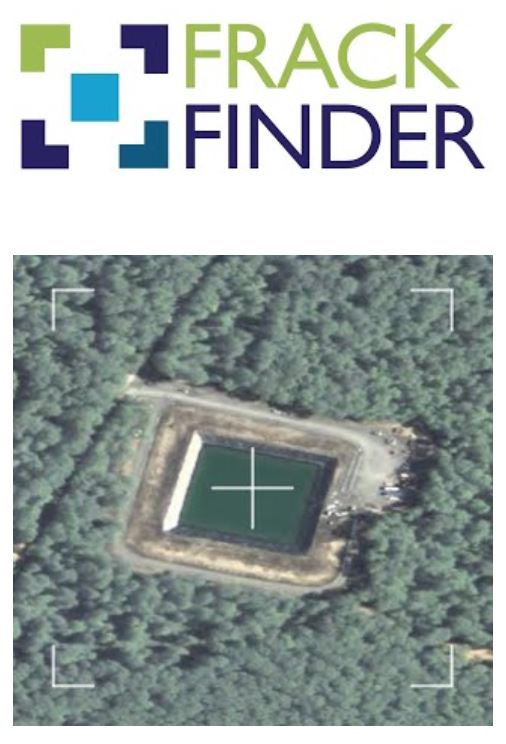 SkyTruth has recently initiated a process to transition from having several volunteers conduct collective image analyses to identify and map fracking sites to using machine learning and automating the process of detecting oil and gas well pads. The machine learning model could simultaneously be used across thousands of computers to extract polygons delineating well pad boundaries which could then be analyzed in mapping software.

The company also helped the nonprofit Appalachian Voices by mapping the occurrence of mountaintop removal mining (MTR) over 30 years. SkyTruth used satellite images to create a map that showed mountaintop removal mining spread out across 59 counties in Kentucky, West Virginia, Tennessee and Virginia, with the size of individual mines and amount of directly affected landscapes increasing over the studied period. Dr. Emily Bernhardt, a biologist at Duke University, used the historical data mapped by SkyTruth as one of her sources in a study that provided the first conclusive evidence of the direct link between MTR and downstream water pollution, as well as related environmental degradation. This new study influenced the EPA’s decision to withdraw a mining permit that had been issued by the Army Corps of Engineers. The EPA did so in accordance with the authority granted to them under the Clean Water Act. This ruling was challenged up to the Supreme Court and then reaffirmed in the U.S. District Court for the District of Columbia in 2014.

SkyTruth is currently working on using real-life imagery to differentiate between fishing vessels and non-fishing vessels, or potential offshore infrastructures like oil platforms or fish farms. SkyTruth is working with Global Fishing Watch who is also interested in identifying this difference because not all commercial ships are included in their platform since, according to Mr. Amos, “their system can only show fishing vessels which are actively broadcasting an identification signal.” SkyTruth and Global Fishing Watch, therefore, hope to soon be able to categorize detected structures on satellite imagery to prevent these from disrupting aquatic ecosystems.

SkyTruth has been working towards the conservation of natural resources and promoting more sustainable industries using remote sensing and mapping since 2001. Their goal to preserve the environment is innately geographical, as it promotes constant awareness of our surroundings and urges us to protect all that our planet has to offer.