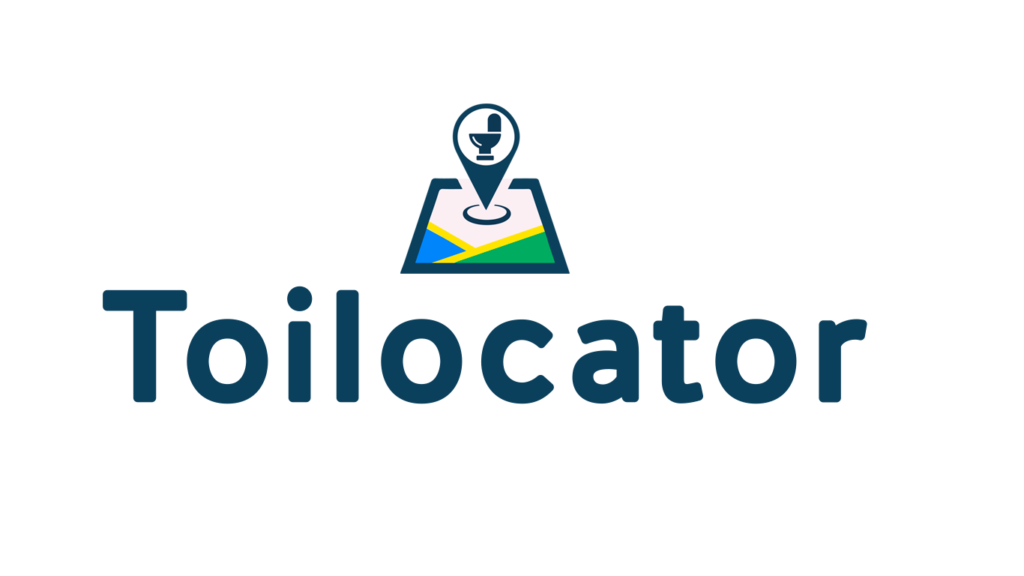 A quintessential aspect of the traveling experience is the search for the nearest public toilet.  In certain countries however, this inherently spatial question of washroom accessibility is one that is particularly challenging.  Take India, for example.  Despite having one of the world’s largest and fastest growing economies, sanitation and hygiene remains a pressing issue in need of attention.

A 2016 study conducted by WaterAid found that India ranked first worldwide for “most urban-dwellers without access to safe, private toilets”, numbering 157 million individuals.  The lack of safe, private toilets, particularly in poor slums and rural areas, is compounded by the fact that approximately 564 million people in India practice open defecation.  According to Unicef, the prevalence of this practice leads to health concerns such as increased diarrhoeal death among children under 5 years of age.  Additionally, the dearth of safe toilets disproportionately affects women, as studies have found that adverse pregnancy outcomes may result from poor sanitation practices.  For India’s populace and travelers alike, the limited accessibility of toilets is a highly relevant and pressing topic. 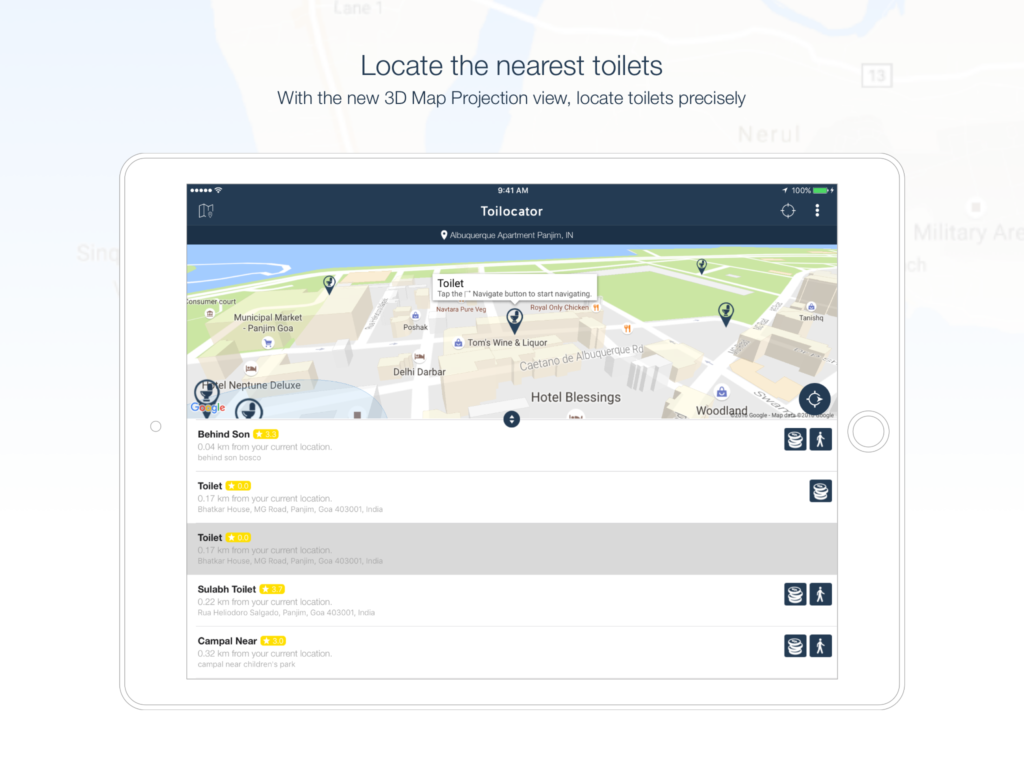 Toilocator’s interface on a tablet with the 3D Map Projection view.

Confronted with these challenges of restroom accessibility and drawing upon his own traveling experiences, Joash Pereira of Goa decided to develop Toilocator, a free app that uses GPS and GeoIP technologies to help individuals easily locate and navigate to nearby toilets.  “There are a lot of places where we still observe unhygienic practices and lack of sanitary awareness.  We would like to contribute to changing this and Toilocator is our way of doing our part” states the Goa-based mobile app developer and web designer. 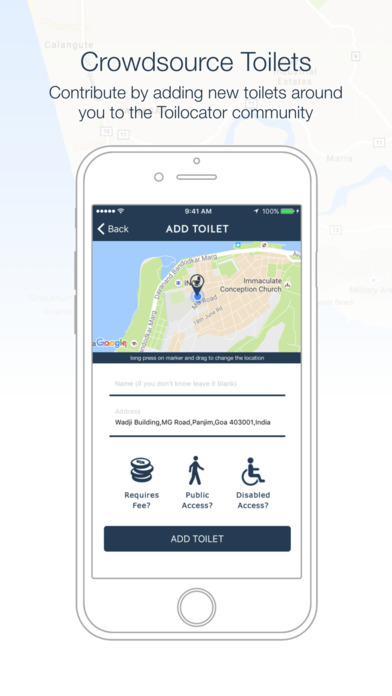 Featuring user-contributed data, the app gives more information than just the location of a toilet.

Toilocator finds and displays toilets within one’s vicinity, drawing from its database of over 290,000 toilets across 157 countries.  This is made possible through both crowdsourcing and the Google Maps platform on which the app is based.  The result is a map that not only displays the locations of toilets, but also information on accessibility for disabled persons, if the facility is free to use, and user-contributed ratings.  Toilocator can also navigate the user to a selected toilet, an endeavor that is facilitated with the 3D Map Projection view.  This is reflective of Joash’s objective to make the app “conveniently usable by people of all age groups and geographical and lingual backgrounds”. 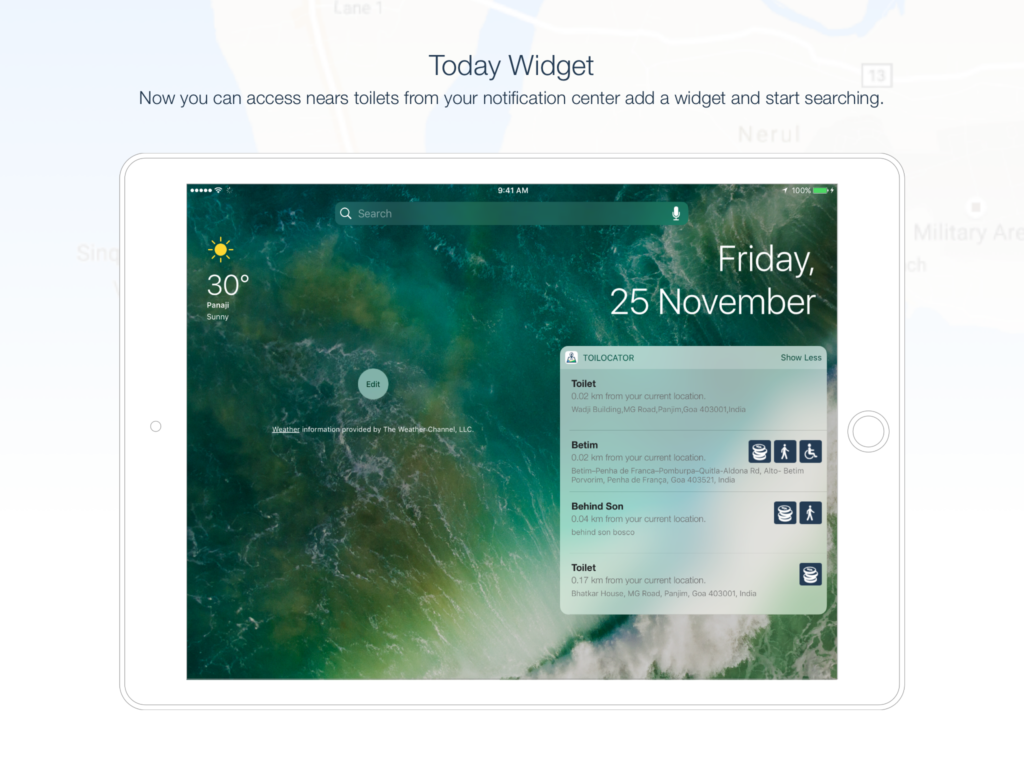 Toilocator’s recent update allows you to access the app from a homescreen widget.

While most of the app’s active users are located in Europe and North America, the developers hope to achieve a similar level of reach in countries closer to Toilocator’s origin.  Additionally, they are working on adding support for multiple languages and improving the credibility of user-submitted data.  While crowdsourced maps have recently been used for crisis response or recreational purposes, Toilocator’s innovative application of the concept to improve ease of access to public restrooms is reflective of how geographical tools can be used to address pressing issues on both national and global scales.

All images in this article are courtesy of Joash Pereira