DigitalGlobe is one of the leading global providers of high-resolution satellite imagery and geospatial analysis. Founded in January of 1992 as one of the first satellite imaging companies, DigitalGlobe currently operates a constellation of satellites that provide imagery to numerous government agencies, map makers, business organizations, humanitarian organizations, and environmental monitors, including the U.S. Government, Google Earth, and the Humanitarian OpenStreetMap. Their database includes over 5 billion km2 of current and historical geospatial imagery.  On Friday, June 5th 2015, key members of the DigitalGlobe team spoke with the American Geographical Society staff to gives a firsthand account of the important work they do in geospatial and satellite imaging.

DigitalGlobe’s self-defined purpose is Seeing a better world™, “by giving their customers the power to see the Earth clearly and in new ways, [and] enable them to make our world a better place.” (https://www.digitalglobe.com/purpose-vision-values) They work towards providing industry solutions in a variety of fields, such as aiding civil governments through spatial analysis of sociocultural distributions and emergency zone management plans, assisting oil and gas corporations in detecting and managing suitable new energy sources, and monitoring global development programs to ensure successful solutions to growing resource needs and human rights crises. They also aid the military in their humanitarian and operational missions around the world by providing up-to-date imagery of difficult to reach areas of the globe and extracting contextual information about those locations using a wide range of data sources. 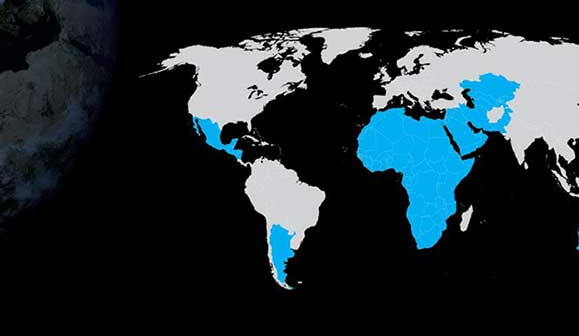 DigitalGlobe’s single largest customer is the United States Department of Defense’s National Geospatial Intelligence Agency. DigitalGlobe provides data to the National Geospatial Intelligence Agency through a program called Global Enhanced GEOINT Delivery (G-EGD), which provides current, high-resolution, and unclassified imagery for operational planning, situational awareness, and emergency response. DigitalGlobe’s satellites can provide “rapid response” images of high-priority areas, often within 24 hours, and the data can be accessed on-demand by any web-connected device and downloaded for offline use. The G-EGD program supports continuous intelligence data collection through a “daily take” from the world’s most advanced satellite constellation, which adds more than 1 million km2 of new imagery to the platform, ensuring the most current imagery is at the U.S. Government’s fingertips. 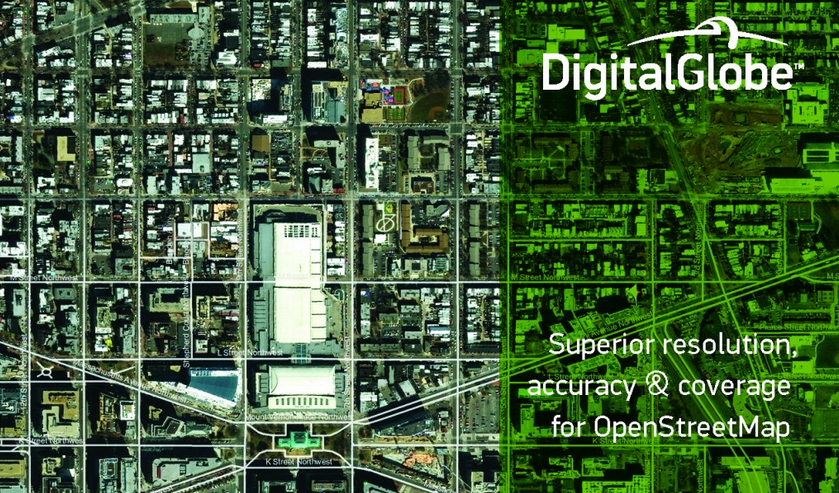 Much of the Google Earth and Google Maps imagery is provided by DigitalGlobe under a long-term, strategic relationship. DigitalGlobe’s high-resolution global imagery allows Google to provide an unprecedented view of the world to just about anyone with an Internet connection. The images that DigitalGlobe sells to Google have reached a resolution of 30cm in some areas, supplying Google and the public-at-large with an immensely powerful geospatial tool.

Not only does DigitalGlobe sell high-resolution imagery to businesses and government agencies, but they also provide it at no cost to humanitarian and not-for-profit groups and organizations, such as Humanitarian OpenStreetMap Team (HOT). Missing Maps is a collaboration to map vulnerable areas of the world that lack accurate maps and/or capability to make them. The maps are open sources for everyone to access without cost. In addition to working with Missing Maps, DigitalGlobe also has their own online crowdsourcing platform, Tomnod, where anyone can log on and help with problems around the world. Director and Product Specialist, Kevin Bullock, explained that “the beauty of this are the tools that make it easy for you and I to log in and within minutes be analyzing imagery, looking for damaged buildings, looking for displaced people in tents, and looking for roads that are impassible.” DigitalGlobe makes a point of distributing their reliable imagery in areas where it is crucial in preparing for the future, or critical in solving current crises.

Recently, DigitalGlobe satellite imagery has been a key component in expediting disaster relief efforts following the earthquake in Nepal on April 25, 2015. DigitalGlobe’s WorldView-3 satellite helped provide high-resolution imagery of the aftermath within 48 hours, giving first responders and aid organizations, a look at conditions on the ground and areas of highest concern. This helped plan evacuation routes, aid distribution, and assess damage. 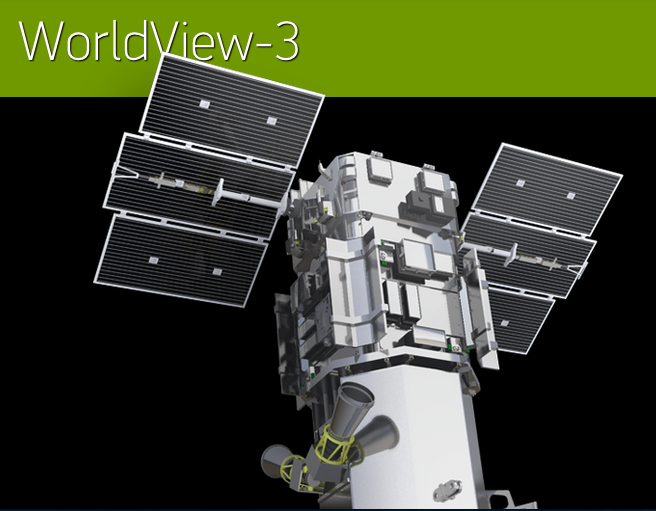 Mr. Bullock stated that “…the biggest limitation [DigitalGlobe] ha[s] is mother nature,” due to the cloud cover that often obscures the field of vision from a satellite. For this reason DigitalGlobe has established a constellation of four satellites that collectively capture the equivalent of six times the land surface area of the world each year. The newest addition to the group is WorldView-3, which launched in 2014 as the first multi-payload, super-spectral, high-resolution commercial satellite. Each of the satellites orbits the earth once every 90 minutes from pole to pole, meaning that 45 minutes of that time will be capturing daylight and the other 45 minutes will be dark. Weather and rain that occurred right after the Nepal Earthquake resulted in some limitations in the satellite imagery, but despite this, DigitalGlobe’s capability to send real-time information to its satellites regarding weather allowed them to capture images during cloud breaks and send only hours-old information to those participating in relief efforts. 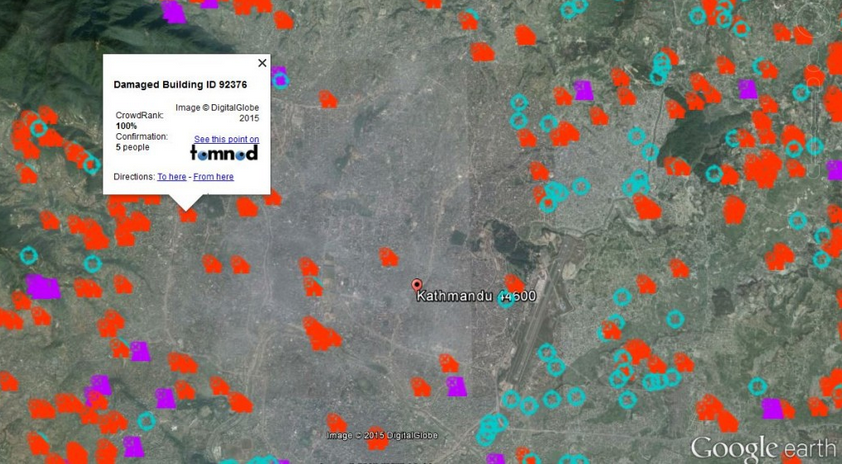 Another crucial part of the relief strategy in Nepal was DigitalGlobe’s ability to work with crowd-sourcing techniques alongside individuals on the ground to create a reliable data source and base maps. DigitalGlobe worked with Kathmandu Living Labs, the Red Cross, and the United States Agency for International Development (USAID), among others, to create a vast data set where satellite imagery was only the first step in helping aid workers respond as quickly and efficiently as possible. Using the website Tomnod (Tomnod.com) individuals from around the world were able to participate in interpreting the satellite imagery by detecting roads, destroyed buildings, and areas of highest concern. Almost 58,000 people came together on Tomnod to provide aid for Nepal and contribute to the on-the-ground effort. Local people, with the help of Kathmandu Living Labs, were then able to use the maps and add their local understanding such as “oh I know how to get there” or “I know the name of that street!” to create a powerful and accurate mapping platform.

Mr. Bullock compared the situation in Nepal to the earthquake in Haiti a few years earlier in 2010. He noted that the mapping in Haiti before the quake was very sparse, which greatly impeded relief efforts, and while the OpenStreetMap team was able to create several maps in Haiti after the earthquake to help the response teams, they had to start with practically no basemap. The experience gained from the earthquake in Haiti made the response in Nepal just that much quicker, because people knew what kinds of mapping resources were crucial and what had been missing in Haiti that prevented the aid from being most effective. Kathmandu, however, already had extensive mapping before the disaster, and some survey efforts existed outside of the capital as well. The Kathmandu valley had been identified as an earthquake prone zone years before the earthquake, and this kind of predictive information allowed for preemptive mapping to take place in case a calamity struck, as it unfortunately did. Bullock asserted that the human suffering in Nepal could have been as much as ten times worse had the response not been able to use the existing cartography, in part provided by satellites from DigitalGlobe, to approach the situation efficiently and effectively. Preemptive and preventative mapping are an important part of where geospatial technology is heading, with Bullock saying that while they “can’t predict when mother nature is going behave” they can look for signs such as seismic fault-lines and high population densities, as were present in Kathmandu, to focus on areas that are at risk. Speaking about the effort Bullock stated, “We built this network organically. There are all these local response teams so that in a bad situation, we have this network setup.” He reiterated, “The charter we have around here is that something can happen today or tomorrow, or this weekend, maybe in 12 months from now, in any part of the world, [and] the cool thing is that we have the technology [and] the crowd to respond immediately. And the amount of help we are able to provide will get better over time.” 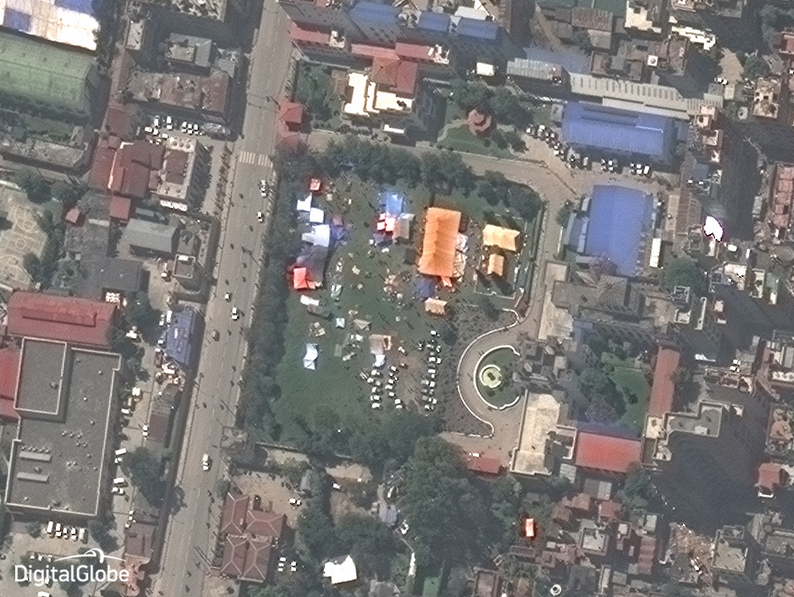 Kathmandu refugees after the earthquake

In addition to humanitarian efforts regarding the earthquake in Nepal, DigitalGlobe is also involved with mapping to prevent and address human-driven disasters around the world. One example is their work with George Clooney’s Satellite Sentinel Project, which works to expose war crimes in the Sudan. Using their satellites, DigitalGlobe can track villages that have been burnt by insurgent groups, and get satellite images of refugees in order to track the violence and send signals to on-the-ground workers about which areas are at risk. Bullock emphasized how this tracking of the criminal activity over-time through satellite imagery is much more effective in human rights law trials than individual pictures of atrocities that do not show patterns.

Another DigitalGlobe project in Africa involves the tracking of elephants via satellites in order to prevent poaching, and the use of predictive historical analysis to determine where poaching is most likely to occur and where law enforcement needs to be most attentive. Additionally, DigitalGlobe satellites can track the effects of climate change using satellite imagery to monitor glacial melt and coral health beneath the oceans, providing crucial data to scientists who are researching the long-term changes of our planet.  Bullock explained that DigitalGlobe’s motto “seeing a better world” can be interpreted in a preventative sense as “stopping things before they happen.”

The future of DigitalGlobe and spatial analysis is in three dimensional imagery.  The way that Kevin Bullock sees it, is that “we live in a three-dimensional world, our brains interpret three dimensions Recreating three dimensions using geospatial information is just a natural continuum of product and technology.” Three dimensional imagery is composed of many different images of the same location from different angles. DigitalGlobe has so much imagery of the world that they can already map a large portion of the world in 3D. With 3D data, we will be better equipped to look at rough terrains, such as Nepal. This could advance our preparation for natural disasters as well as aid after an event.  Not only can spatial analysis be applied to humanitarian uses, but also could lead to new scientific discoveries. “We’ve already mapped the world in 2D, our goal now is to map the world in 3D. That is the absolute the future of this industry.”