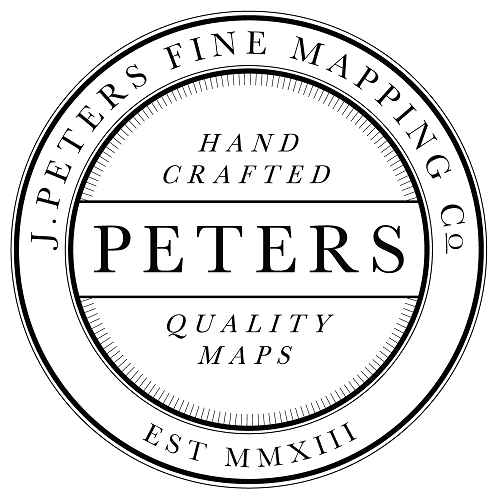 “Every map ever drawn is an expression of someone’s perception of the world, and just like each person is different, each map is different, and shows us a glimpse of someone else’s life.”

“Regular maps have few surprises: their contour lines reveal where the Andes are, and are reasonably clear. More precious, though, are the unpublished maps we make ourselves, of our city, our place, our daily world, our life; those maps of our private world we use every day.”

Based in Kelowna, British Columbia, J. Peters Fine Mapping Company creates high-quality, hand-drawn maps through a commission-based service.  Founder Joshua Peters is an avid traveler and artist who studied geography and history at Simon Fraser University.  He began this company to bring his artistic talent and passion into the tradition of making hand-drawn maps.  His works include journeys through the arctic to bird’s eye views of busy cities to fictional landscapes based on books and media.

The maps of our modern world are primarily concerned with pragmatic matters. We use them to get from point A to point B, or to understand how variables are distributed and related across space. But sometimes, the most fascinating maps are not born out of carefully curated data-sets or produced for the navigation of physical spaces. Rather, the maps that are woven together from our memories, experiences, and imaginings—cognitive maps of the places we’ve been or fantastical maps of fictional spaces and inaccessible realms—are the maps which reveal the most about ourselves, the spaces we inhabit, and the relationships between them. 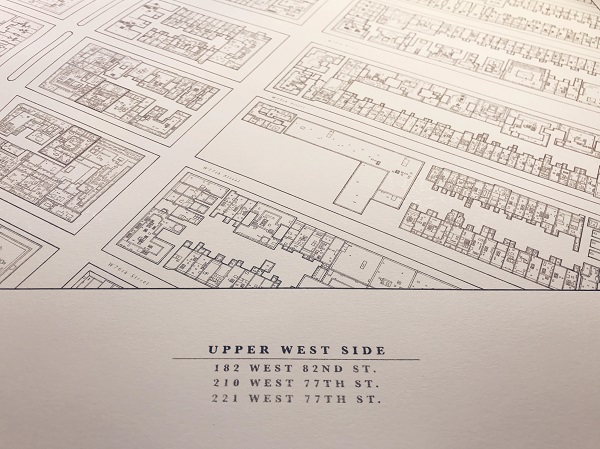 A map of the Upper West Side.  Map and photo by Joshua Peters.

This relationship is what inspires Joshua Peters to create hand-drawn maps.  Based in Kelowna, British Columbia, J. Peters Fine Mapping Company makes high-quality, hand-drawn maps that illuminate the personal connections between his clients and their wanderings across the land.  Whether it be a trek across the arctic, a journey by bicycle across Western Canada, or the Old Town of Edinburgh, Joshua’s works capture how a single place can be mapped in many ways, each one unique to an individual and their perceptions of the world they live in. 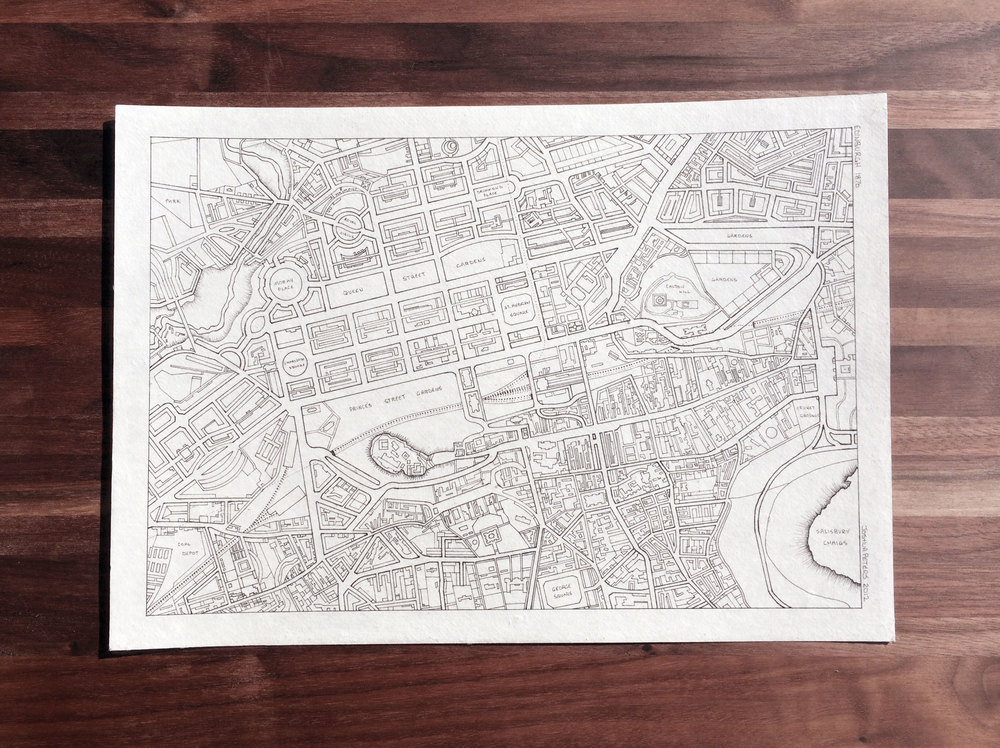 A map of the Old Town, Edinburgh. Map and photo by Joshua Peters

The abandoned ruins of a Greek Temple, the meandering streets of Istanbul–these are examples of the scenes which caught Joshua’s attention and inspired him to begin illustrating maps.  An avid traveler and geography graduate from Simon Fraser University, Joshua regularly sketched places he encountered during his travels and kept them in a personal book of maps.  Dissatisfied with his job in finance after university, he struggled to find a way to pursue his passions in geography, art, and history.  People noticed his book of maps and encouraged him to consider making his practice into a profession.

A map of an Arctic Trek in the Fall of 1999.  Map and photo by Joshua Peters.

Joshua then decided to take a risk.  He quit his job and began a Kickstarter campaign in 2014, which quickly hit funding goal within a week and even became selected as a Kickstarter Staff Pick.  Armed with black Copic archival-quality ink and Canson Artist-Series 1557 classic cream drawing paper, Joshua began his quest to create illustrated maps custom-made to his client’s visions of the world. 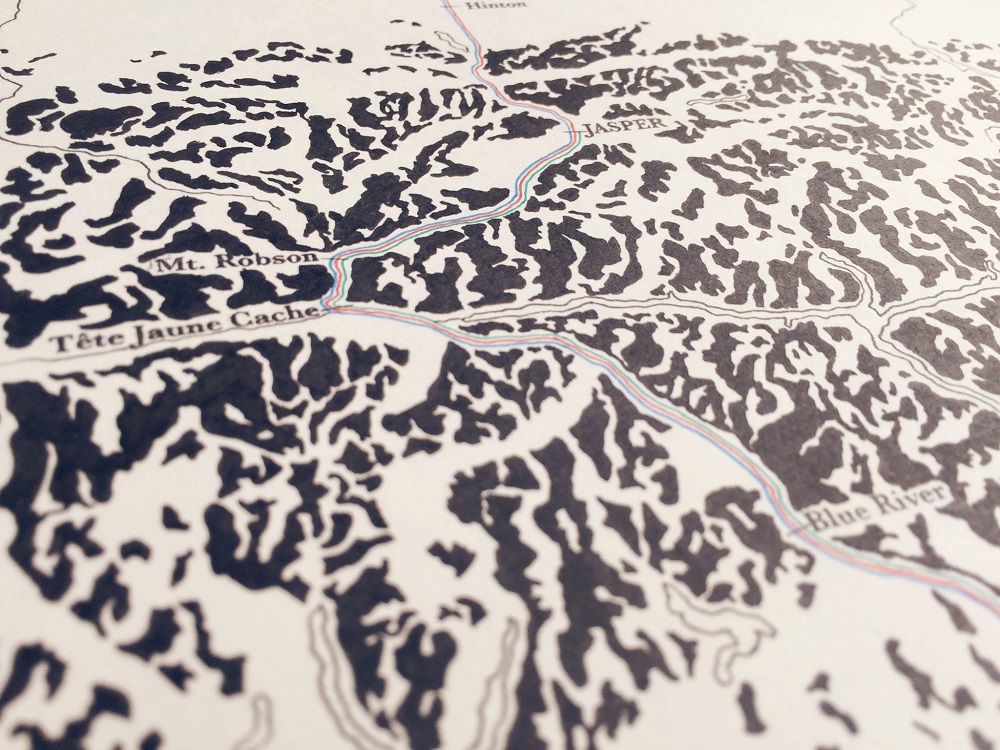 From the campaign, he launched J. Peters Fine Mapping Co. with the goal to continue applying his artistic talents to the illustration of hand-drawn maps.  For Joshua, the most challenging part of his job is also the most interesting: balancing his client’s perspectives of the landscape with the geographical realism and precision demanded by maps.  “The right amount of detail, the right things to include, the text, the font, the size… everything that’s going to mean a lot to them and nothing to anyone else… it’s [about] distilling that and getting something that people want and love,” states Joshua on his creative process and decision-making while illustrating his maps. 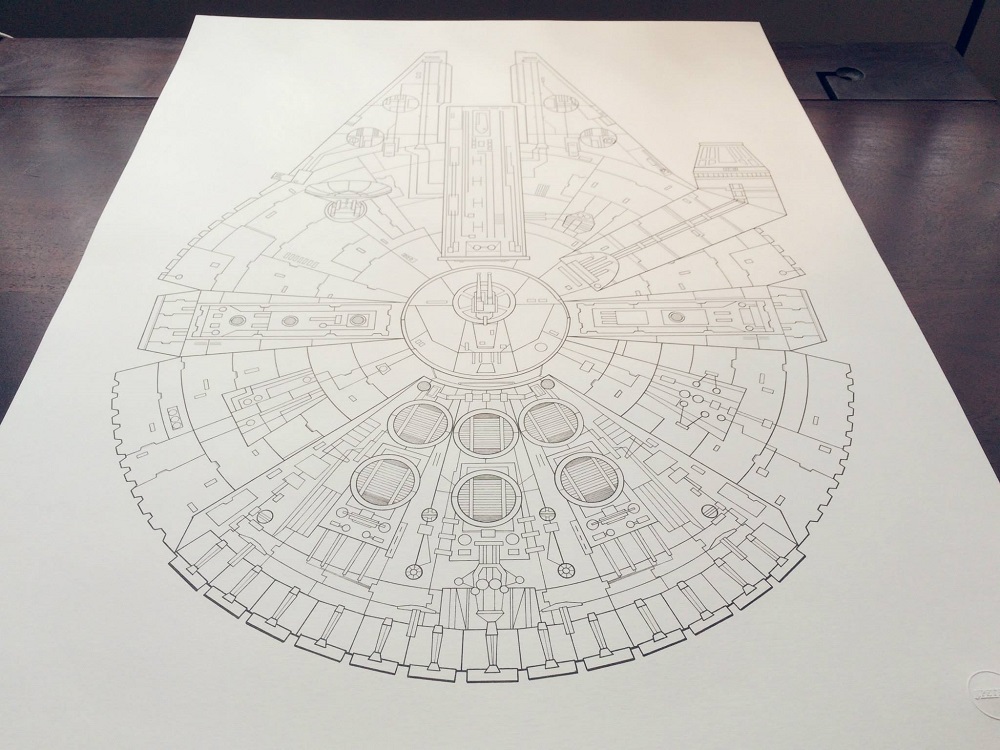 A schematic map of the Millennium Falcon from Star Wars.  Map and photo by Joshua Peters.

Joshua’s projects vary wildly between commissions and showcase both the flexibility of his technique and the myriad maps which emerge from human imaginings, memories, and experiences.  One His most recent projects is a commission by the Naftali Group for both the West Village and the Upper West Side of New York City.  For these maps, Joshua uses satellite imagery as a reference to create a bird’s eye view of the city.  The amount of detail which goes into these maps is dizzying and is among some of his most complex works.  He is also currently working on a map of the American Sector of West Berlin during World War II. 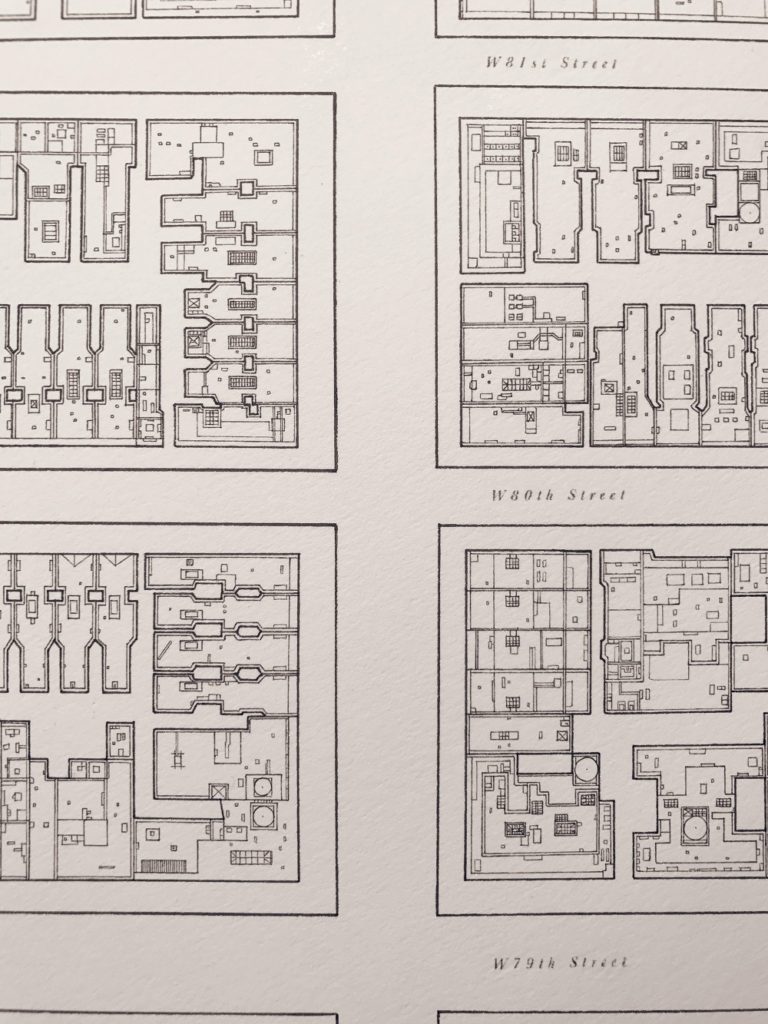 A close-up of Joshua’s map of Manhattan’s Upper West Side.  Photo by Joshua Peters.

In our fast-paced, modern world where products are largely made to be replaced, Joshua hopes his hand-drawn maps will express the importance of quality over quantity.  “I strongly believe that a healthy society needs to create and share quality goods, that last a long time,  enrich our lives, and bring us together as a community.  This is my effort to create, learn, and contribute,” wsays Joshua Peters.  Through his hand-drawn maps, Joshua captures how geography and self are inevitably interrelated, and that maps may chart the way for a better world and future. 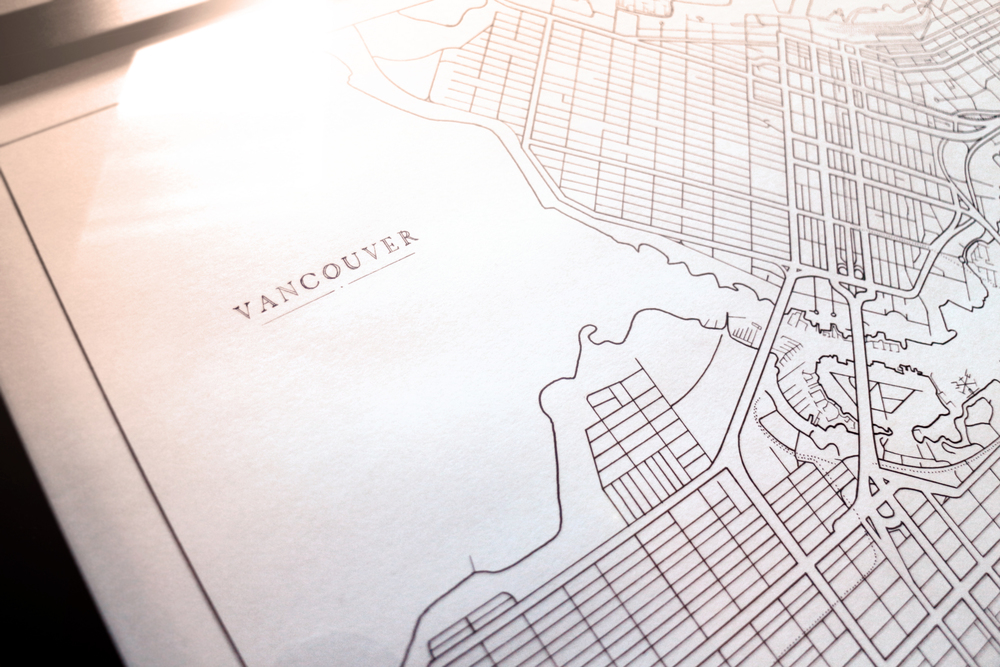 Map of Vancouver.  Map and photo by  Joshua Peters.

To learn more about J. Peters Fine Mapping Company, visit their website here or check them out on Facebook and Etsy
Before you go, check out this cool video below by Snowpatch Media featuring Joshua Peters work!