Earth’s last frontier is not an icy, impassable mountain range or a vast, labyrinthine jungle, but it is hidden beneath the sunlit surface of the ocean.  Far from its representation on most world maps as a featureless expanse of blue, the deep ocean has a highly complex and varied topography replete with towering volcanoes, narrow canyons and sweeping plains.  These challenging environments of the deep sea are home to uniquely adapted, diverse ecosystems found nowhere else on Earth.  The organisms that dwell in these deep sea ecosystems may serve as invaluable genetic resources that contain keys for curing certain human diseases.  Considering how the ocean also plays a significant role in moderating our planet’s climate, it would not be an exaggeration to state that the ocean is a crucial component of life on Earth. 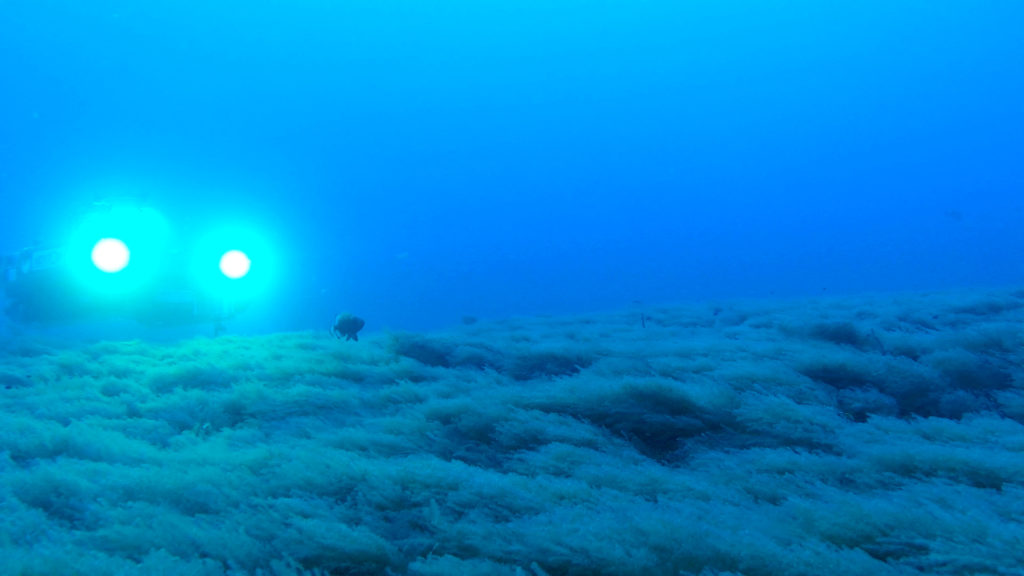 Despite how essential the ocean is to human life, it remains as one of our planet’s least known ecosystems.  Only 5 percent of the ocean has been explored, and the best full-coverage maps of the seafloor, derived from remote sensing techniques, are at a limited 5-km resolution.  Compare this with outer space, the other frontier which receives much more attention.  While 500 people have been into space and 12 individuals have stepped onto the surface of the moon, only 3 humans have ventured into the deepest part of the ocean.  However, this is not surprising considering the challenging conditions of the deep-ocean environments such as extreme pressure and the lack of natural light, presenting its own unique engineering problems comparable to space exploration. 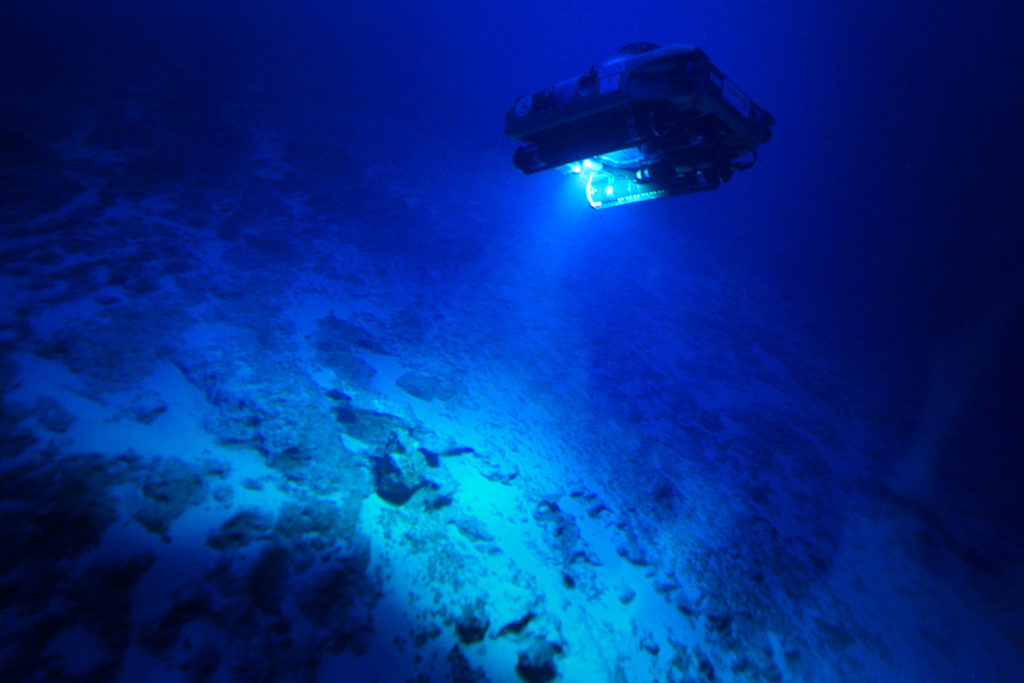 Very little light penetrates past the mesopelagic zone at the depth of 200 meters, necessitating the use of artificial light sources.  Photo Courtesy of Nekton and the XL Catlin Deep Ocean Survey

Even though we understand little about the biological, physical and chemical characteristics of the deep ocean, it is increasingly affected by human activity.  The amount of oxygen-depleted dead zones continue to grow, while the ocean has become 30 percent more acidic since the beginning of the industrial revolution.  If these trends continue, many marine species may be driven to the brink of extinction by the year 2100.

In light of these pressing trends and incomplete understanding of our planet’s final frontier, how can we act to protect and preserve the health of our oceans?  Nekton, a non-profit, scientific research charity based in the UK, believes that the answer lies in gathering new scientific knowledge on the deep sea and engaging the public’s interest to catalyze change.  “It’s a race against time to explore and understand this critically important ecosystem before it’s too late,” states Oliver Steeds, Nekton’s Mission Director and Founder. 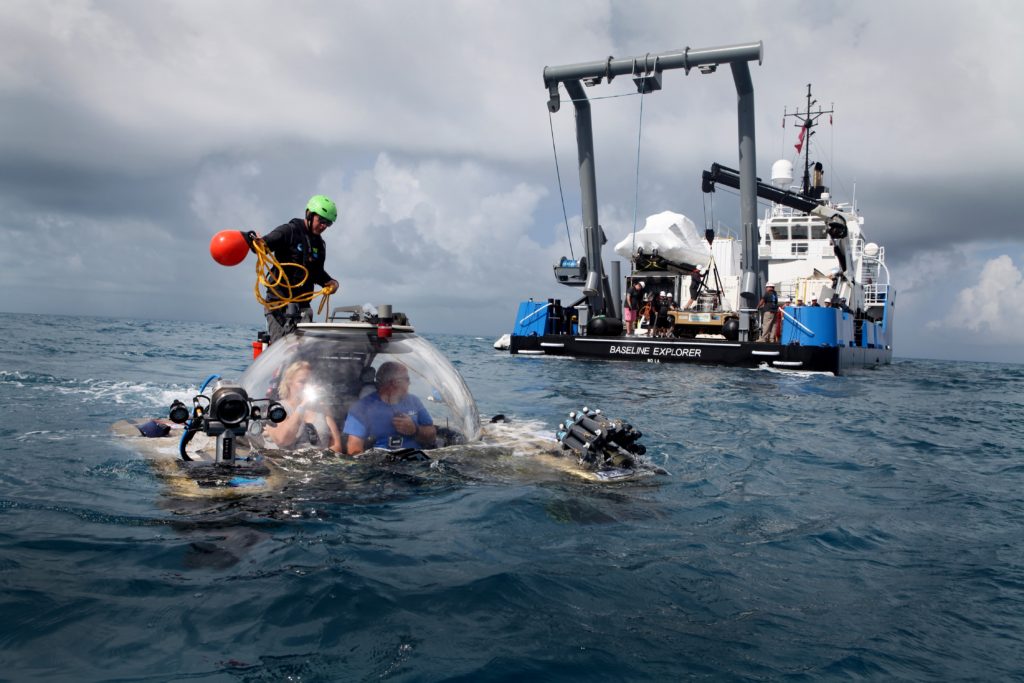 To accomplish this, Nekton brings together leading scientists, governments, organizations, industries and educational institutions under the common cause of conducting scientific research to create the first universal baseline of ocean health, function and resilience.  Nekton is also deeply involved in engaging the public by bringing attention to the mysteries and wonders of the deep ocean, inspiring marine stewardship in younger generations through education and information.  An example can be seen in how Nekton uses Virtual Reality 360-Degree Cameras to film their deep sea expeditions, allowing the audience to experience the descent to the depths. 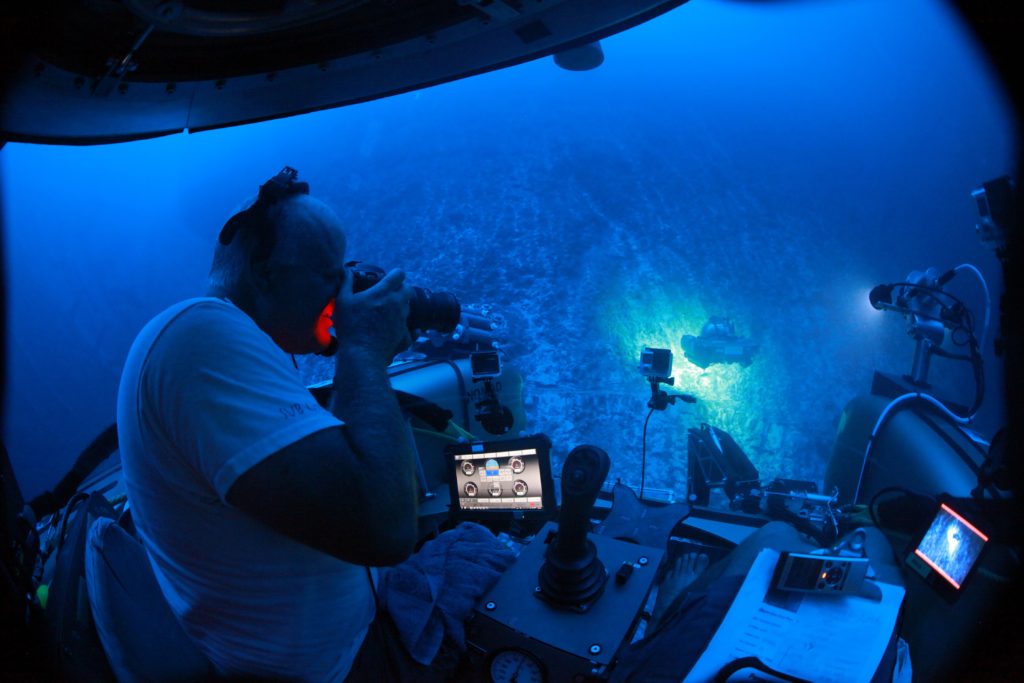 Outfitted with transparent acrylic hulls able to withstand the intense pressure of the deep ocean, Nekton’s Triton submersibles allow their pilots to observe the depths.  Photo Courtesy of Nekton and the XL Catlin Deep Ocean Survey

With the latest, innovative technologies in remotely operated vehicles, manned submersibles, research vessels and underwater videography, Nekton conducts expeditions to deep-sea habitats to study and monitor the health of the ocean.  These complex hubs of biodiversity, such as seamounts and deep-sea coral biotherms are extremely sensitive, and serve as “barometers for ocean change” as described by Mission Director Oliver Steeds.  Their most recent, 2016 expedition, sponsored by reinsurance company XL Catlin, took them to Bermuda, The Gully Marine Protected Area, and the Sargasso Sea. 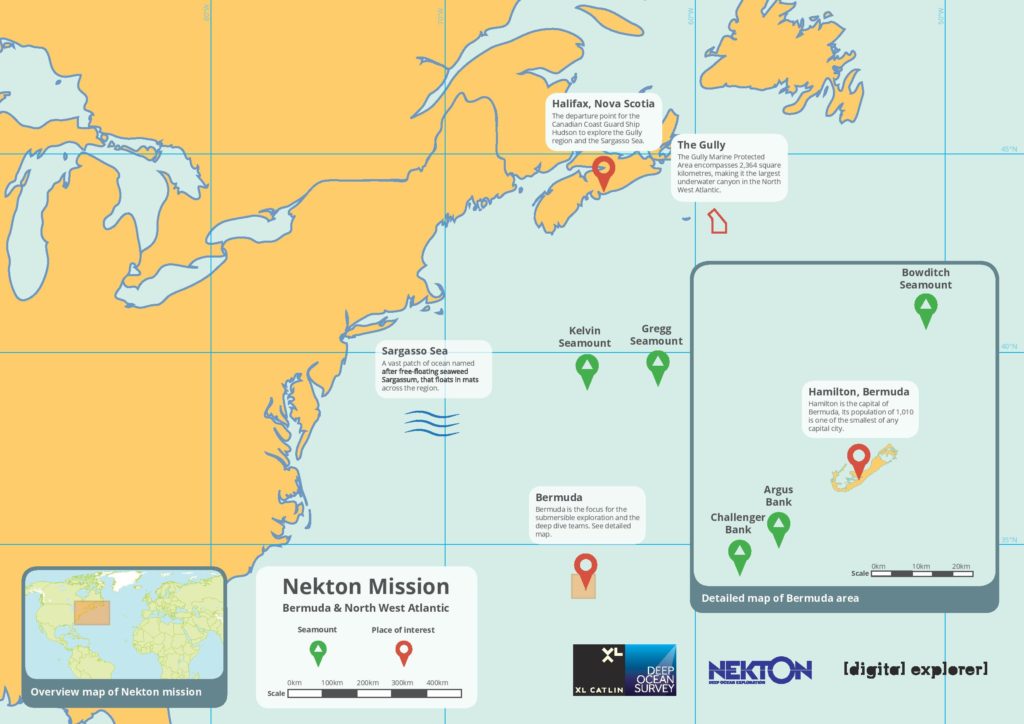 Among the many achievements of Nekton’s 2016 expedition, set to culminate in the release of the XL Catlin Deep Ocean Survey early next year, is the establishment of a new, standardized methodology used by marine biologists worldwide for measuring physical, chemical and biological indicators of the ocean’s health.  One other surprising finding concerns the discovery of a new mesophotic algal forest near the previously unexplored Argus Seamount.  Located 30 miles southwest of Bermuda, the nutrient-rich algae on this submarine mountain serves as a refuge for organisms affected by ocean acidification and bleaching events in nearby, shallow reefs.  The mesophotic algal reef is akin to a ‘deep ocean pasture’ that is crucial for “rebuilding the resilience of the surrounding ocean” according to Professor Alex Rogers, Nekton’s Science Director and Professor of Conservation Biology at the Department of Zoology, University of Oxford.  Researchers encountered gardens of twisted wire coral and hydrocorals, fast-moving sea urchins, green moray eels, yellow hermit crabs, and an unidentified species of small pink and yellow fish, a level of diversity and density that surprised even local Bermudian scientists.  Nekton is currently awaiting the full findings of its sample and specimen analysis at its Oxford-based laboratory. 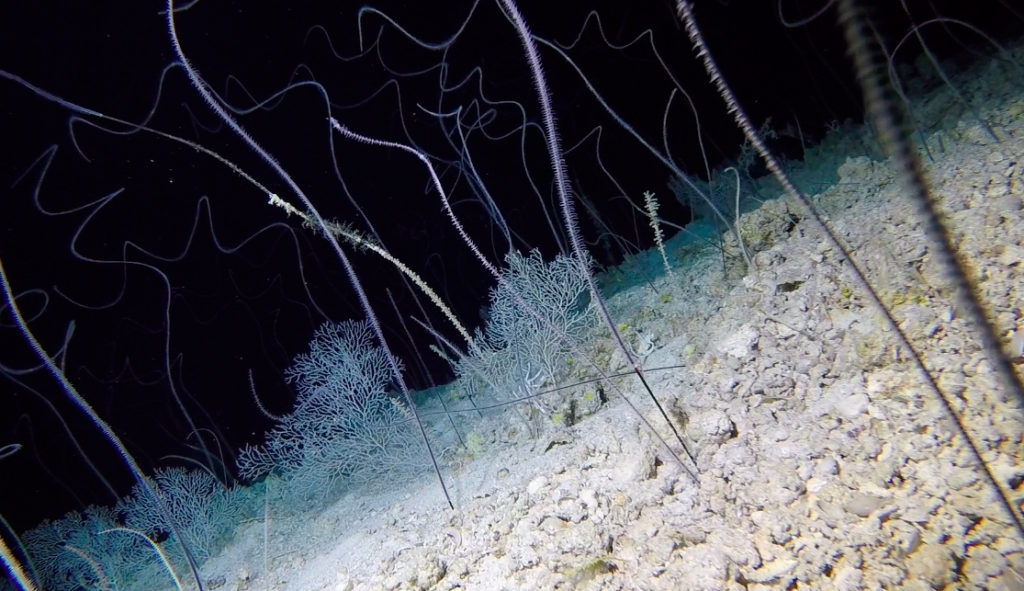 Wire Corals and Sea Fans in the deep ocean floor.  Photo Courtesy of Nekton and the 2016 XL Catlin Ocean Survey

Following the success of their initial missions, Nekton is planning on undertaking a seven year global circumnavigation to research and create the first universal baseline of the ocean’s health, function and resilience.  Along the way, they also plan to take one of the largest, new inventories of marine life, and to make their gathered scientific data open to the public. Considering how our insufficient knowledge of the deep ocean significantly hampers ocean governance, Nekton’s efforts to make their data open to all can serve as a basis for policy change that protects these environments.  Through using innovative technology to explore the planet’s final frontier, Nekton hopes to inspire sustainable marine stewardship in future generations so that they too may experience the wonders of our planet’s mysterious world hidden beneath the waves. 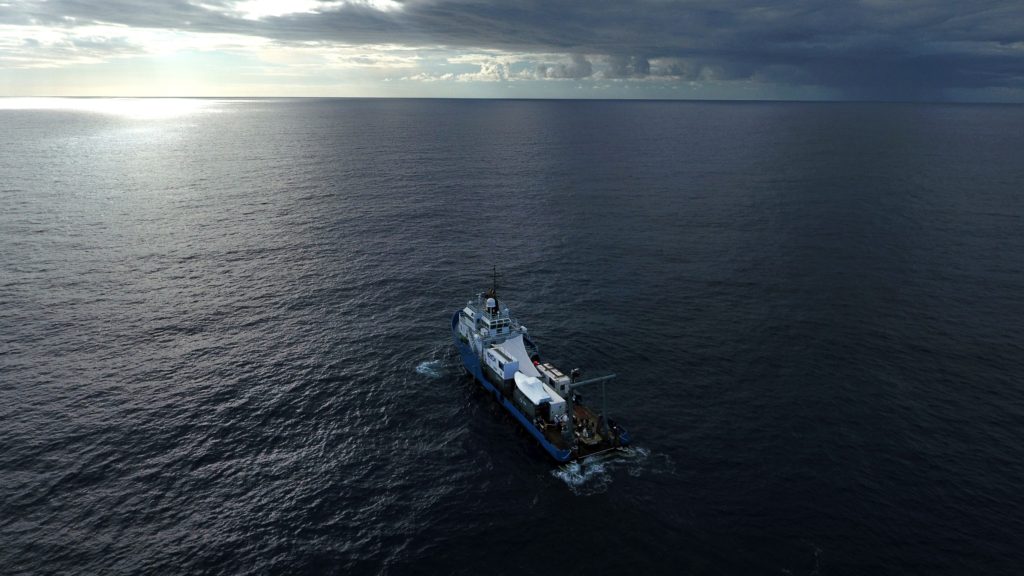 An aerial shot of the Baseline Explorer at the Argus Seamount.  Photo Courtesy of Nekton and the XL Catlin Deep Ocean Survey

Check out this cool Virtual Reality VR Film: Journey to the Deep by Nekton