America’s roadways are often overcrowded, in poor conditions and underfunded. One out of every five miles of highway pavement is in poor condition according to the 2017 Infrastructure Report Card. StreetScan is trying to change this with its mobile sensing devices and asset management software.

StreetScan’s beginnings started in 2008, when Ralf Birken, CEO and and cofounder of StreetScan, in conjunction with other scientists at Northeastern University, were asked by the National Institute for Standards in Technologies to develop new technologies for pavement inspection. They came up with a winning proposal for a project that was funded in 2009. It was a five year, $18 million dollar project with demand to demonstrate a working prototype by the end of the five year period. Birken was the project manager and a research professor at Northeastern University at the time.

Five years later, the research group from Northeastern University developed a prototype mobile sensor system capable of detecting road defects and a GIS application that could be used as a budget planning/maintenance tool for decision-makers to implement their infrastructure plans with a data-driven approach. They were able to test the technology and survey the entire city of Beverly, Massachusetts. The success in Beverly and the harsh winter in 2014 led to the commercial development of StreetScan. Municipalities from all over the country began inquiring about the product to use in the Spring.  After realizing the commercial potential and impact of their research, StreetScan was officially founded in the spring of 2015 to bring their innovative technology to municipalities across the country.

StreetScan’s services include two main components – the ScanVan, a van mounted with their data collection system and sensing technologies and PaveMon, the GIS based planning tool for decision-makers and urban planners. 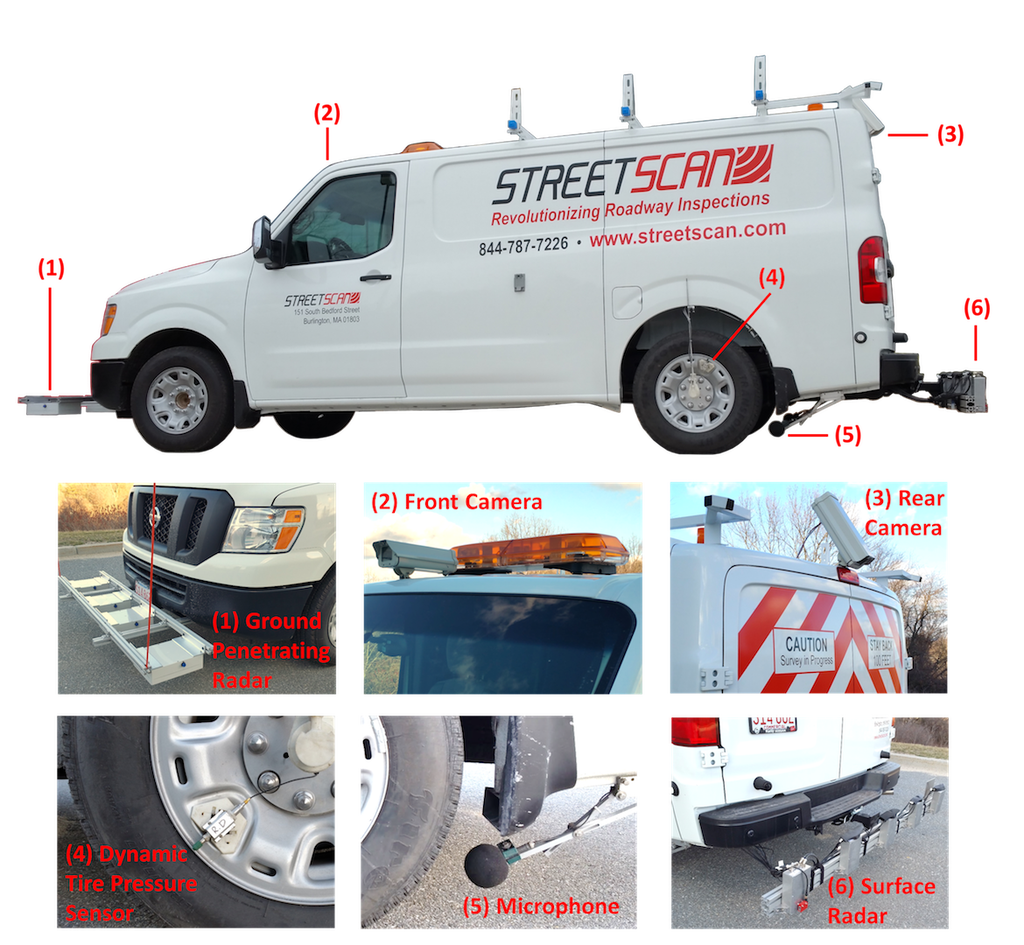 The ScanVan drives over each road of the city and is able to collect about a terabyte of data a day. It can drive 80 miles at city traffic speed. It picks up imagery of the road, including defects like potholes or cracking. The primary sensors on the ScanVan includes 3D cameras, 2D video cameras, surface radar array (proximity sensors which measure distance and roughness of the road), and a positioning system (GPS).

The data is then automatically transferred to a file storage and a highly automated processing scheme picks up the data and processes it into what is called the Pavement Condition Index. The Pavement Condition Index measures the damage of the road. It’s a number between 0 and 100 while 100 is a perfectly paved road and 0 is a road that might damage your car. Each road segment of the city is graded in this system. This data is then visualized in an online GIS system called Pavemon, in which the entire city is color coded by the rating of each road. What is unique about StreetScan’s GIS system is the flexibility of the system. It is a fully integrated software which accumulates data from all of the sensors and is synchronized to 360 microseconds. The system can be reconfigured with any kind of sensor including thermal or infrared. 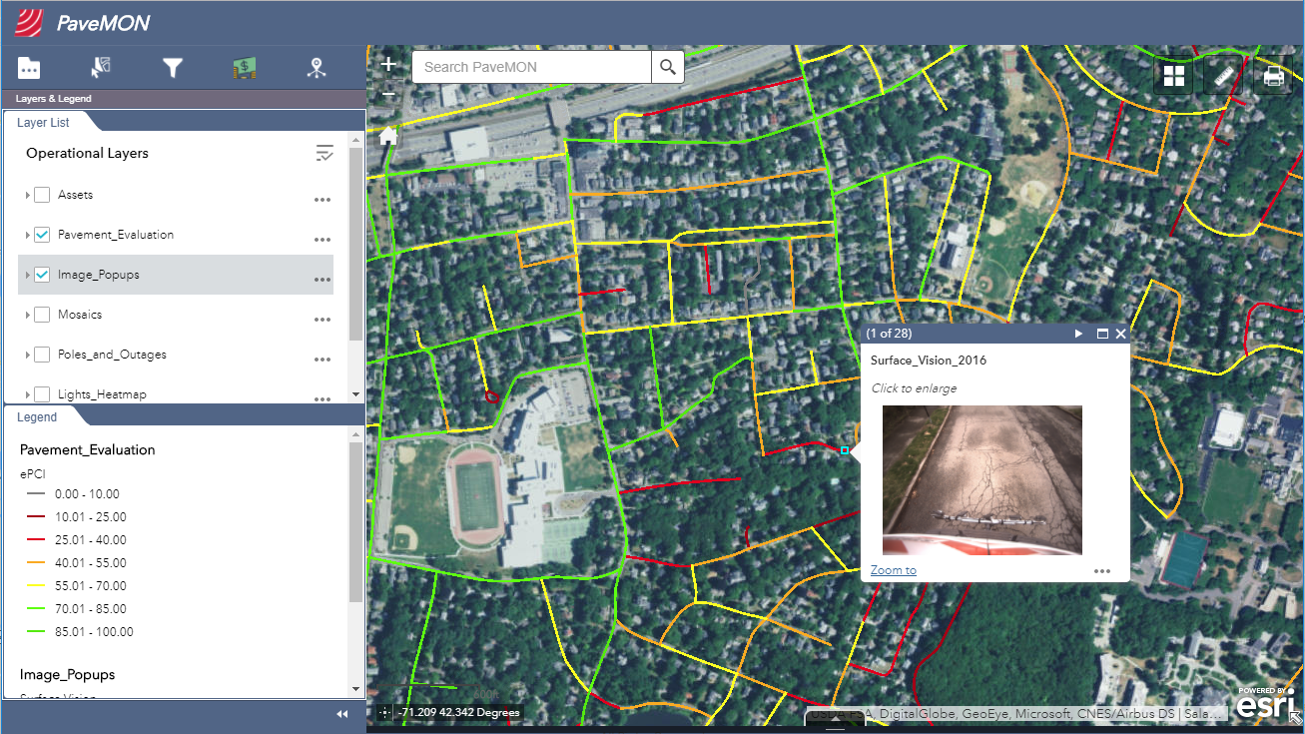 This image depicts webbased GIS application called Pavemon. The map shows parts of a city road network, color coded by Pavement Condition Index (PCI). The scale is shown on the bottom left. You can click anywhere on the map and you’ll get a picture of the road at that location.

Lastly, StreetScan provides help in analyzing the data and prioritizing which road segments should be repaired. The repair cost for each road segment is calculated based on the area of the road and the cost of the repair method itself. Usually, the cost of all repairs of the entire city network is more than what the city can afford so StreetScan helps cities prioritize which road segments need fixing based the condition of the road, traffic on the road, cost benefit ratio and climate data.

StreetScan recently signed with Providence, Rhode Island, which is StreetScan’s biggest city to date. In addition to the inspection of roads in Providence, StreetScan will also be inspecting their sidewalks. Their sensors will be mounted onto a segway style vehicle which will drive over the sidewalks, collecting data. StreetScan is currently in negotiations with the city of Portland, Maine and are expected to sign contracts to survey their roads.

In the near future, StreetScan is hoping to help cities with other assets like street sign markings and streetlights. In the long term, StreetScan is planning on reducing the size of their sensing systems to the point that they can be mounted on fleet vehicles or even autonomous vehicles in order to cover more ground. This will reduce costs and increase the data volume of the sensors.