For over four decades, The Xerces Society has been dedicated to invertebrate conservation. Founder Robert Michael Pyle founded this conservation movement after having studied insect conservation in England. During his time there, he attended a meeting discussing the impending extinction of the large blue butterfly in Britain. After the butterfly truly went extinct, Pyle was reminded of a similar butterfly we have lost in America due to human activity, the Xerces blue. From there in 1971, The Xerces Society came to fruition as the leading international nonprofit organization dedicated to the protection of invertebrate wildlife and conservation of their habitats. One of the ways their conservation efforts are highlighted is through their mapping resources. “Maps are central to many of our projects, from establishing historical and current distributions of imperiled species for use in gaining Endangered Species Act protection to surveying individual farms for use while planning habitat creation” – Matthew Shepherd, Communications Director. 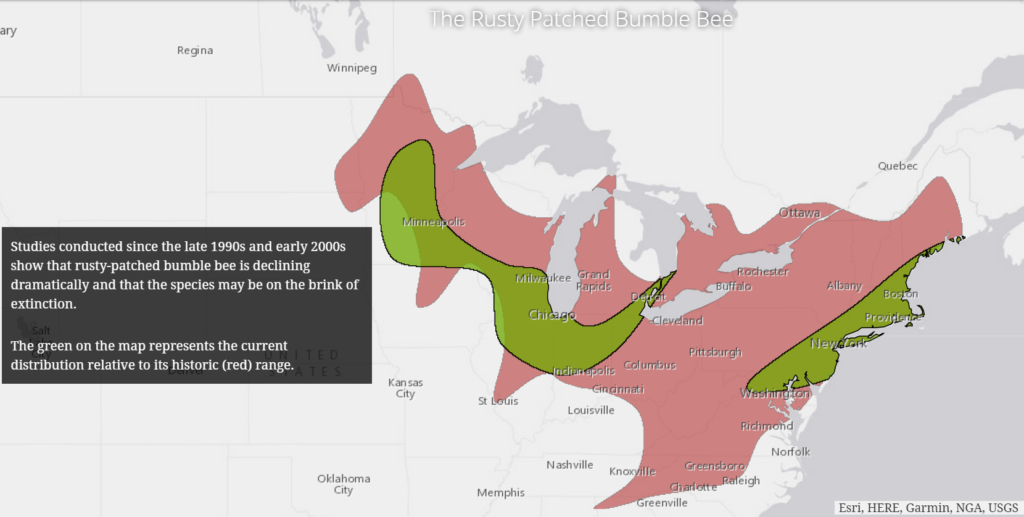 The Xerces Society played a significant role in the collective effort to conserve North American bee populations. In January 2013, Xerces Society and bumble bee scientists Dr. Robbin Thorp and Elaine Evans submitted a petition to list the rusty-patched bee. Partnering with several collaborators, a citizen science program was launched in 2014 to track and conserve North America’s native bees through Bumble Bee Watch. Through the use of crowdsourced information, Bumble Bee Watch compiles photo evidence and location information of bumble bees and nest sightings onto an online map. The site also allows for identification of bee species through the bumble bee identification guide. 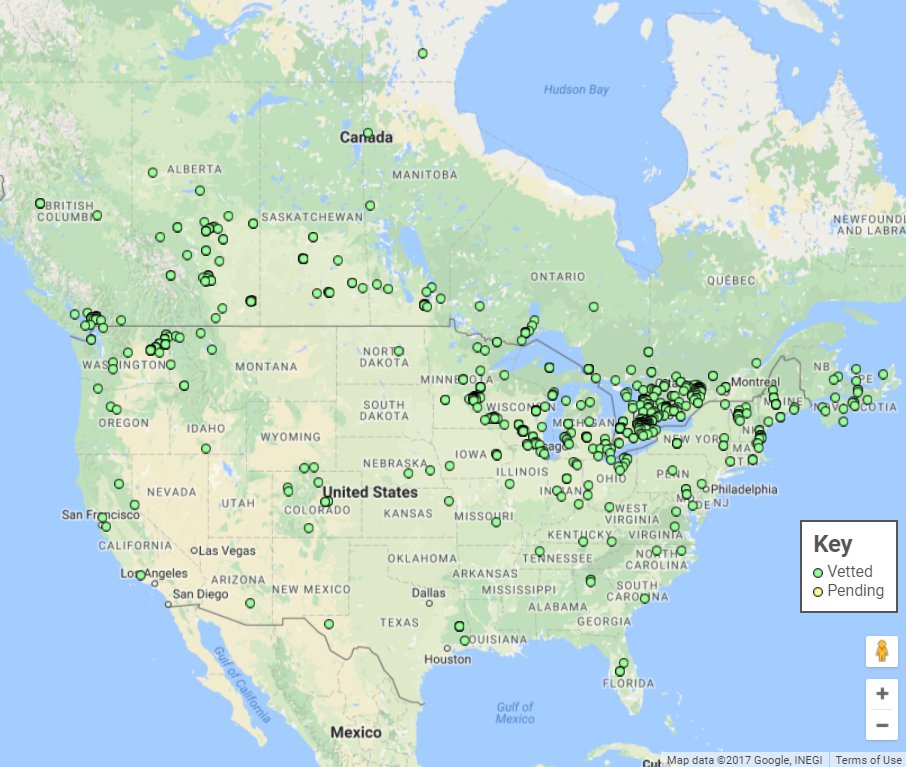 Another mapping tool Xerces Society uses for conservation purposes is the Western Monarch Milk Weed Mapper. Monarch butterfly population has declined in correlation to the increasing loss of milkweed, a host plant to monarch cocoons. In the 1990’s, around 700 million monarch butterflies migrated each autumn from the northern plains of the US and Canada to Mexico, and over one million monarchs overwintered on the west coast of California. Since then, monarch population has declined by 74% in coastal California and more than 80% in central Mexico since monitoring began about 20 years ago. 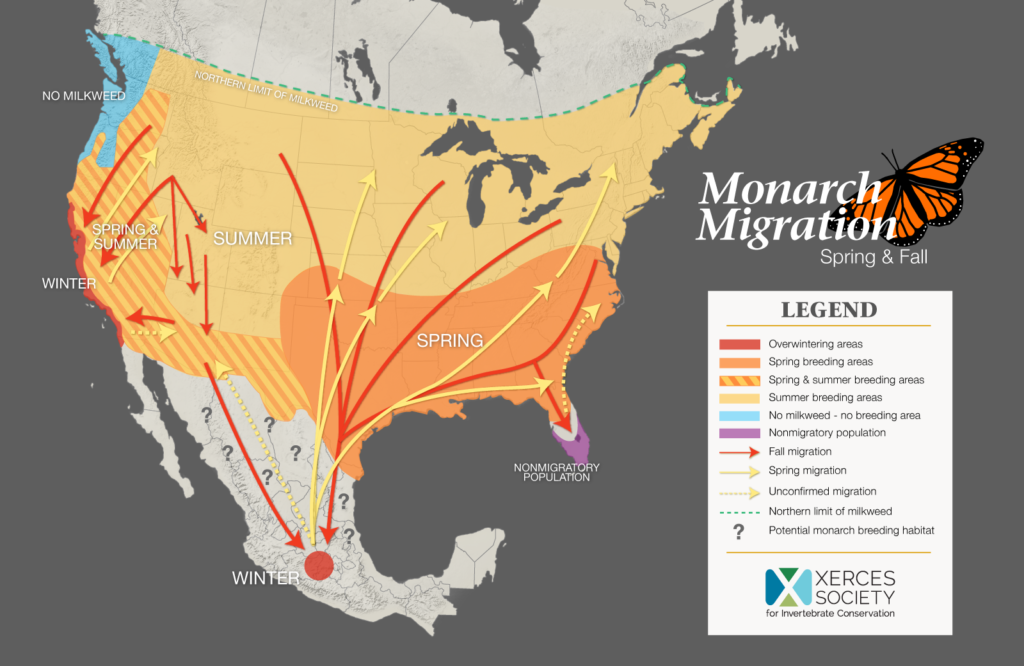 Despite having gathered a database map of monarch and milkweed occurrence records from museum vouchers, online herbaria, scientific literature, butterfly researchers, botanists and land managers, scientists lacked data in many areas. To fill in these in marked areas on their maps, web-based Western Monarch Milkweed Mapper collects sighting submissions from public data collectors. The site offers a guide to identify species as well. With just a smartphone or digital camera and computer, everyone can help the cause for conservation by sharing their monarch/milkweed sightings. Engaging citizen scientists to join the cause from their own cities allows Xerces Society to collaborate with both organizations and everyday people in the conservation and restoration of invertebrate species. 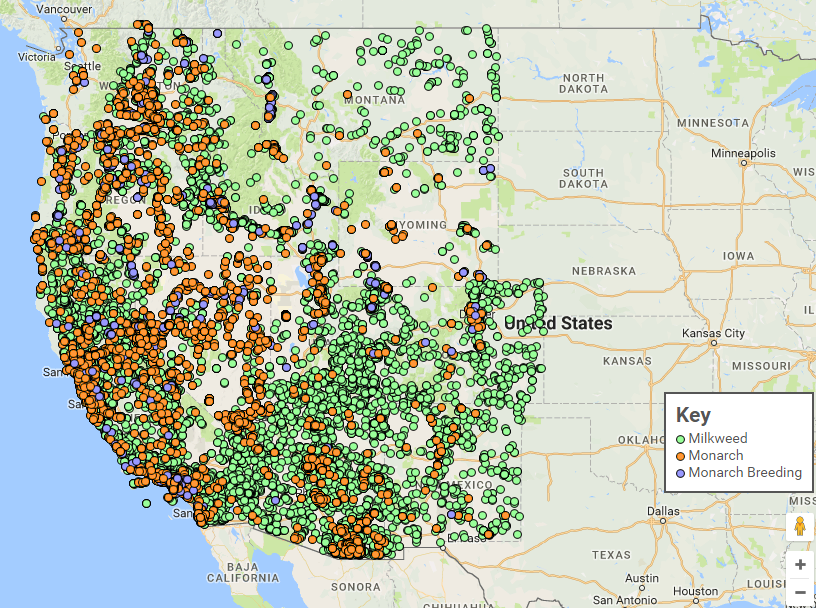 Xerces Society also encourages people to garden plants that protect bee and butterfly populations. With the Milkweed Seed Finder, people can search this national directory to locate where to purchase native milkweed seeds to be planted. Some other ongoing projects include public conservation education initiatives native species and restoration of watersheds.

Communications Director Matthew Shepherd shared some of Xerces Society’s future plans to include “expanding [their] pollinator conservation team by adding a half dozen new biologists who will work with farms and the USDA Natural Resources Conservation Service. We will be launching the Bee Better Certified program to recognize farmers and food producers who are working to protect bees. We are also gradually extending our involvement in urban areas, which will lead to more involvement with schools and community groups.”