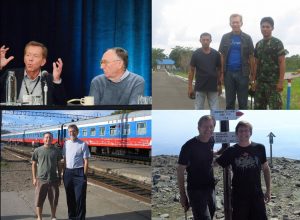 The summer before my junior year at Wayne State University in Detroit, I rolled my 1959 VW bug while going 60mph on a camping trip near Traverse City, Michigan. The gods must be crazy, because I survived, and the VW survived. But I took it as a sign, and I sold the VW with the idea that I would use the cash to take a trip to Europe that winter. I had declared my major in geography the spring before, and I was also into my second year of German, so I decided to fly to London for a week, take a train to Vienna and spend a week practicing my German, then return to London for another week before returning home on New Years Eve.

As my overnight train was approaching Westbahnhof in Vienna on a snowy December morning I started chatting with the elderly Austrian man sitting across from me. He asked me what I was studying. After I told him he replied – “Sie sind Geograph? Ich bin ein Geograph!”

Reflecting back on my life, I can say that I am not only a geographer, but I am Geography.

I can remember two early experiences that first awakened strong and distinct awareness of geographic concepts in my mind. First, before I began any schooling, sometimes my mom would try to keep me amused in the afternoon by drawing maps of imaginary places. Sitting side-by-side at the kitchen table, she would take a blank sheet of paper and draw an irregular shape (polygon) which she would call Greg Island. She would sketch some waves in the water. Then she would draw perspective views of tiny little houses, a church, and a school, and trees (points) clustered near a cove. Then she would draw some mountains in the center of the island and two or three scattered farmhouses with barns and cows. Then she would sketch in some double-line roads (lines) from the seaside village to some of the farms…. Then she would invariably say, ‘Oh Greg, I have to work on dinner now. You keep working on your map, OK? I’ll look at it with you later.’ So, I have derived joy from making maps since about when I was three or four years old. The other early geographic experience was related to spatial organization of the world. I grew up in a typical suburban Detroit neighborhood. That was the world that I knew. One sunny Sunday afternoon, dad announced that we were going for a drive. He drove out Grand River Avenue, to the northwest, and soon we were in gently rolling farm country near Novi, Wixom, and New Hudson. I remember the shock of realizing that the entire world did not look like my neighborhood in suburban Detroit! There was spatial organization to the world! Houses were here, farms were there! I wanted to learn more.

When I turned 12, I began my first job as a newspaper boy, delivering the Detroit News to my territory (route 8) in Dearborn. Now I had real money. My first two big purchases? I subscribed to the National Geographic and I bought my own copy of the Times Comprehensive Atlas of the World. Seven years later I was declaring my geography major at WSU as the city was still convulsed by the Detroit Uprising of 1967. Little did I realize that a WSU Geography faculty member who would be soon fired would shape much of my focus as a geographer for the past eight years.

After I obtained my MA in Geography, I spent about 10 years working in the San Francisco Bay Area, but not in geography. It was the development of GIS that provided the opportunity to make my career switch. I helped develop the GIS for the East Bay Municipal Utility District in Oakland, then moved to Seattle 22 years ago to help complete development of the King County GIS. When I first moved to Seattle, I had lunch with a colleague who was also a past President of URISA. She told me that she had concluded that GIS was a failure. King County had spent $10 million developing its GIS, but it had 25 GIS staff and only about 50 GIS users. 22 years later the ROI from GIS has been proven. Today, at least 6000 of King County’s 15000 employees are GIS users.

Over the years I have been able to realize some of the dreams that I first had when I stared at my Times Atlas and paged through the National Geographic. Climbing the Babia Gora (origin of my family name) in Poland with my son Micah, traveling to Morotai in Indonesia to visit the air force base where my dad flew his combat missions during World War two, crossing Russia by the Trans-Siberian Railroad with my son Daniel, and exploring Mongolia, where my wife’s family originated.

Now, at King County, the work of geographer William Bunge while and after he was at Wayne State University has special significance for me and my work. Jurisdictions like King County have chosen to develop policies and decide projects and programs with an equity lens. Geography and geospatial technology will be a key tool for changing how government agencies work to build an equitable future for all people within our communities. Bunge’s concept of the community as geography and geography as a tool for the community is well-accepted now.

What does it mean to me, I am Geography? Reflecting on the lines of my life, I think about key finites of life – space and time. We live each moment of our lives at some discrete place. But we are in continuous motion across space through time to other places. I remember fondly discussing with Jack Dangermond how our lives are like a beautiful jazz melody with ever-changing experiences, interactions, and emotions, as we move across space through time – we are truly geography. Ich bin ein Geograph! 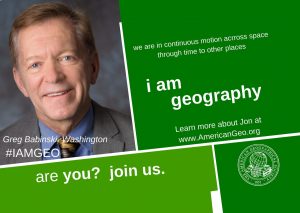