Have you ever been in a taxi cab, stuck in rush hour traffic, and wishing that you’d just walked, ran or biked instead? Well according to some data analyzations in New York City, those cases have become more and more frequent.

With this map developed by data analyst Todd W. Schneider, you can pick a starting location and time of day to find out whether it would take you longer to get to another area of New York City by taxi or by Citi Bike. The more yellow your destination is, the higher the likelihood that getting in a taxi would be more time efficient. The bluer the color, the higher the likelihood that riding a Citi Bike would be faster.

According to samples taken from June 2016 to June 2017, traveling in a Citi Bike is actually faster than traveling in a taxi cab 40% of the time during regular weekday hours. During peak hours, which are from about 9 – 5 pm, this percentage jumps up to just above 50%. Schneider is careful, however, to mention the biases in these probabilities. The percentage represented by this data is based on the idea that the person in question is not only able-bodied but also that every other person is taking their normal routine. For instance, if ridership of Citi Bike suddenly spiked, the availability of Citi Bikes might drastically decrease and congestion on the road might be reduced significantly, causing taxi service to spike upward as the better option. 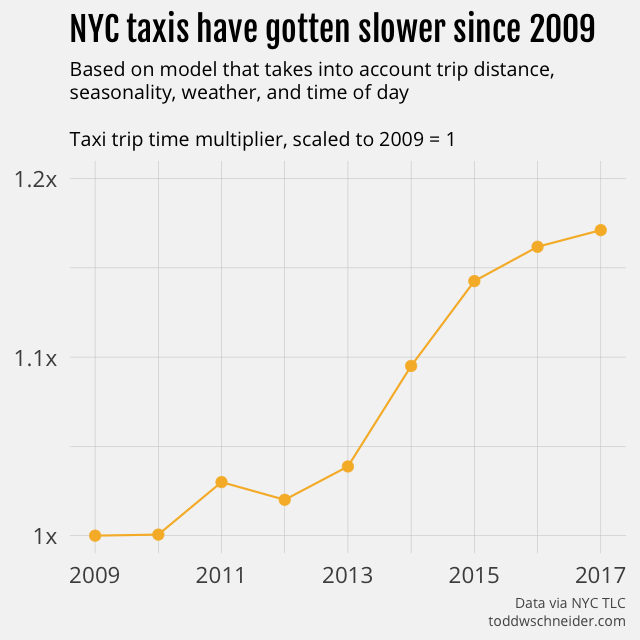 Since Citi Bike’s start in 2013, it has become more efficient to use their service over taxi cabs. Schneider would argue that this is due more to the slowness of taxi cabs than the success of Citi Bike. While Citi Bike speed and usage has remained relatively unchanged, the speed of taxi cabs has slowed greatly over the course of 8 years as shown in the model above.

But why have taxi cabs slowed down? According to the model, the issue seems to have worsened just after 2013. Uber really began to take off in New York City in 2014 and many argue that it has increased congestion and an unhealthy competition with taxi cabs in the city.

The future of taxis is unclear. Will the famous yellow cab that has long been a symbol of New York City one day become obsolete? It’s too early to tell if things will improve but until they do, try riding a bike to work for a change.

Check out Todd W. Schneider’s awesome maps and visualizations on his website here. 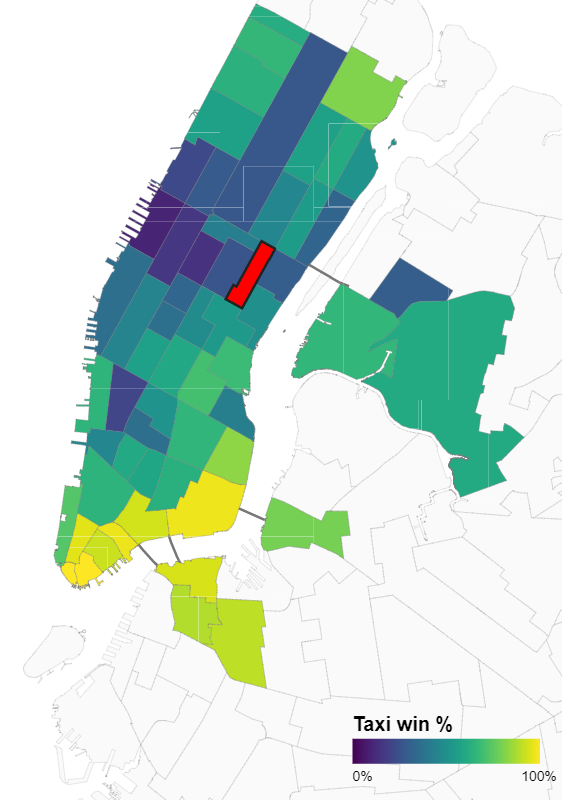