The Earth is currently losing species at 1,000 to 10,000 the natural rate, according to estimates from the Center for Biological Diversity. This massive escalation in endangerment and extinction means that habitats around the world stand to lose critical species in the food chain, as well as spark a host of issues stemming from biodiversity loss.

According to the World Wide Fund for Nature (WWF), this accelerated loss of diverse organisms and wildlife could lead to a decline in food security, access to freshwater, and a loss of ecosystem services, which are worth an estimated $33 trillion every year. This loss of vital resources – to not just our global economy, but our livelihood and health – is one of the symptoms of human accelerated climate change and it’s manifestations. Deforestation (covered in a previous Map of the Week), hunting, poaching, and other proxies for this process have led to many species losing their habitats and eventually becoming endangered or extinct.

This week’s map looks at which countries are hotspots of endangered species. The percentages displayed are a percent of total endangered species worldwide, per the International Union for Conservation of Nature (IUCN). The data is limited to what the IUCN has assessed; so other species may exist, and some may be endangered, but the IUCN has not officially assessed their status yet.C

Update: Check of the below graphic on the most endangered species in 2020. 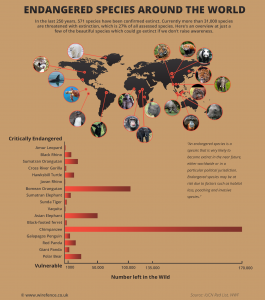 This graphic created by Emma Spinster for www.wirefence.co.uk shows the most endangered species in 2020.