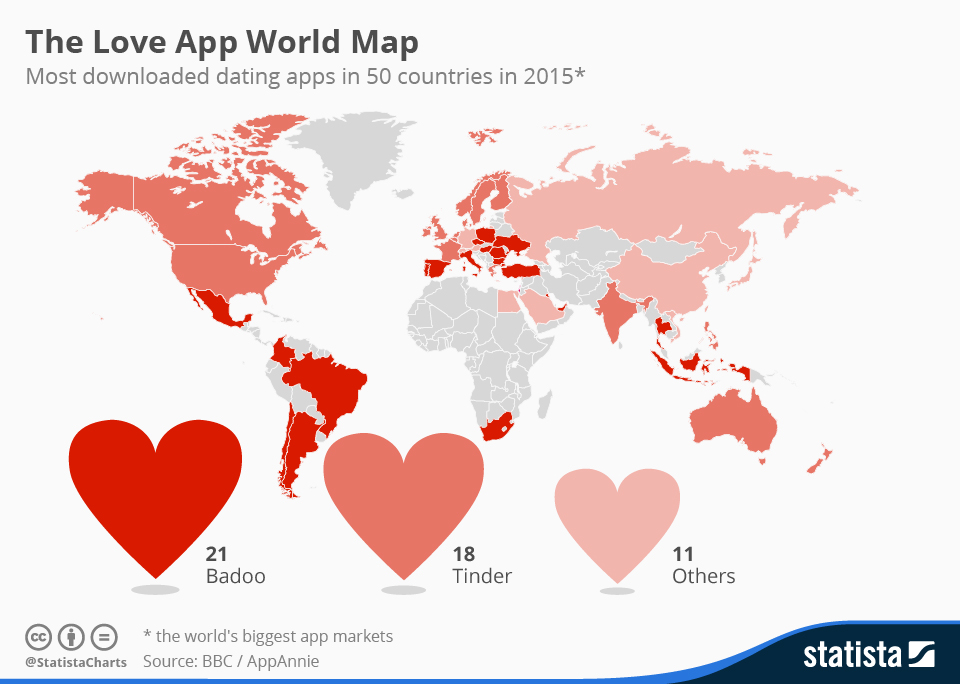 With Valentine’s Day approaching Friday, this Map of the Week shows the top dating apps in the world. The history of Valentine’s Day has been evolving since its Pagan origin and the Catholic dedication day to the patron Saint, St. Valentine. The holiday was even celebrated in the Middle Ages with the exchange of affectionate notes and gifts between social classes. In the early 1700’s, handmade Valentine’s cards were exchanged, and by the 1900’s the first cards were mass-produced. Now, it seems like a heart shaped candy and a dinner will suffice! The traditions of Valentine’s Day are evolving, and may have even changed the way we perceive love and gift giving in relationships. So has the increased use of dating apps unfolded a new standard of relationships in time for the holiday?

According to the map, Tinder and Badoo take the top stance as the most popular dating apps within the past five years, spanning across nearly every continent. They are categorized based on region, so while Tinder is popular in Canada and North America, Badoo dominates the largest Latin American countries. In Europe, there is a split between Tinder and other apps in the Western region versus the use of Badoo in the East. Generally in Asia, the use of other dating apps like Momo, Heartbeep, and WhosHere are popular, to name a few.

So when did dating apps become a medium to find a Valentine’s date? While these apps have seen a surge of popularity within the last decade, there is a rise of downloads leading up to Valentine’s day. In general, dating apps like Badoo and Tinder use geospatial data to show profiles that are close to the user’s geographic radius, instead of common interests. The desire for accessible dating within a geographic range has surged in popularity, due to our “click” culture of instant gratification.