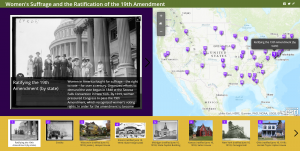 In celebration of the one hundredth anniversary of the 19th amendment, this week we’re bringing you “Women’s Suffrage and the Ratification of the 19th Amendment” a story map created by the National Park Service that zig-zags across the country in chronological order of each state’s ratification of the amendment. Focusing geographically on places of historical significance (listed on the National Register of Historical Places) each numerated location highlights a place where significant advocating on behalf of the 19th amendment occurred. The story map features historic images of places and faces integral to the movement, accumulating into a virtual field trip of early women’s suffrage.

In short, the 19th amendment ensured that “the right of citizens of the United States to vote shall not be denied or abridged by the United States or by any State on account of sex” and required the ratification of at minimum 36 states for successful ratification. On August 18th, 1920 it was formally approved. What is important to recognize, something this story map only briefly touches upon, is that the 19th amendment did not necessarily bring easy access to the polls. While the 19th amendment made it legal for women to vote, it “did not, however, guarantee any woman the vote. Instead, laws reserving the ballot for men became unconstitutional. Women would still have to navigate a maze of state laws—based upon age, citizenship, residency, mental competence, and more—that might keep them from the polls.”

Used especially against women of color, many states passed laws with the full intention of disenfranchising their state’s new voters. Many of these tactics were already in place, only expanded to include women in what was already a bid to prevent men of color from placing their ballots. Often in the form of poll taxes, literacy requirements, and threats of violence, people of color were kept from the polls. Various immigration legislations prevent Asians from being able to obtain citizenship, and even Indigenous people were prevented from legally voting in every state until 1962. In Alaska (at the time of the passage of the 19th amendment it was only a territory) where women were allowed to vote as early as 1913, Native American were excluded.

It only took 36 states to ratify the 19th amendment, Tennessee being the last necessary for its passage. Of the remaining states, it took some longer than others: “On March 22, 1984, the Mississippi legislature voted to ratify the 19th Amendment, acknowledging that women had been fully enfranchised citizens for sixty-four years.” To this day methods of voter suppression exist; in 2013 provisions provided by the Voting Rights Act of 1965 were rolled back, and the geographic accessibility of polling places are limited. Amid the ongoing COVID-19 pandemic, voting for the 2020 Presidential Election has become even more complicated. While we can spend this week celebrating how far we’ve come over the last one hundred years, its important to recognize that there is still further to go, and the sooner we get there, the better.