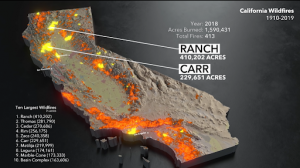 Wildfires are a fact of life in California. I remember the first fire and smoky days I endured after moving to California from the east coast, or rather I remember how nonchalantly people reacted to the thick haze above our campus. While wildfires are no new occurrences, and some may argue it’s important they occur naturally, there have been major shifts in flame activity over recent years. As the animated map above shows, the frequency and intensity of fires has increased drastically over the past decade, and this dangerous shift can be mostly attributed to climate change and the worsening drought throughout the state.

For instance, 2018 was marked by the terrible Mendocino and Camp Fires. Initially, these were deemed the largest and most destructive wildfires in California’s history, but they were quickly dwarfed by the other 411 fires that occurred in 2018 alone. A whopping 1.6 million acres were burned during the 2018 fire season, only one year after 1.4 million acres were burned in the 607 fires during 2017. In Northern California, peak fire season begins in early summer and runs through late fall. In the southern portion of the state, the season begins in late spring and runs until the fall, although fires don’t always follow this seasonal schedule.

This animated map displays a century of California wildfires in under two minutes and includes the total fires and acres burned for each year between 1910-2019. Created in ArcGIS Pro, Cinema 4D, Redshift, and Adobe, this spatiotemporal visualization really sets itself apart from the others.

Interested in learning more about wildfires or seeing what wildfires are currently active in the state of California? Find out more here at CAL FIRE’s website and active fire tracker!