Aerosols, which are microscopic liquid and solid particles suspended in the Earth’s atmosphere, have significant effects on the weather and climate. Approximately 90% of all aerosols have natural origins, such as ash ejected from volcanoes, sea salt sprayed from oceanic waves, and dust whipped up in desert sandstorms. The remaining 10%, which saturates the air downwind of industrial and urban regions, comes from various anthropogenic, or human-made, sources. These include sulfate aerosols, which are formed when sulfur dioxide produced by fossil fuels reacts with water vapor and other gases, as well as black and organic carbon released from slash-and-burn agricultural practices. Automobiles and power plants also produce anthropogenic aerosols when they burn coal and natural gas.

The map below depicts Aerosol Optical Depth, a quantified estimate of how much aerosol is present worldwide, from March 2000 to April 2019. This measure is used to calculate the amount of infrared and visible sunlight reflected or absorbed as a result of aerosol concentrations. Aerosol Optical Depth in this map ranges from 0.0 to 1.0, with an optical depth of less than 0.1 indicating clear sky conditions, and a value of 1 representing hazy skies. Average atmospheric values for the United States fall between 0.1 and 0.15.The data for this map is obtained from images captured by the “Moderate Resolution Imaging Spectroradiometer (MODIS) on NASA’s Terra satellite.” MODIS captures aerosol layers from many angles and wavelengths, making the resulting images very accurate. 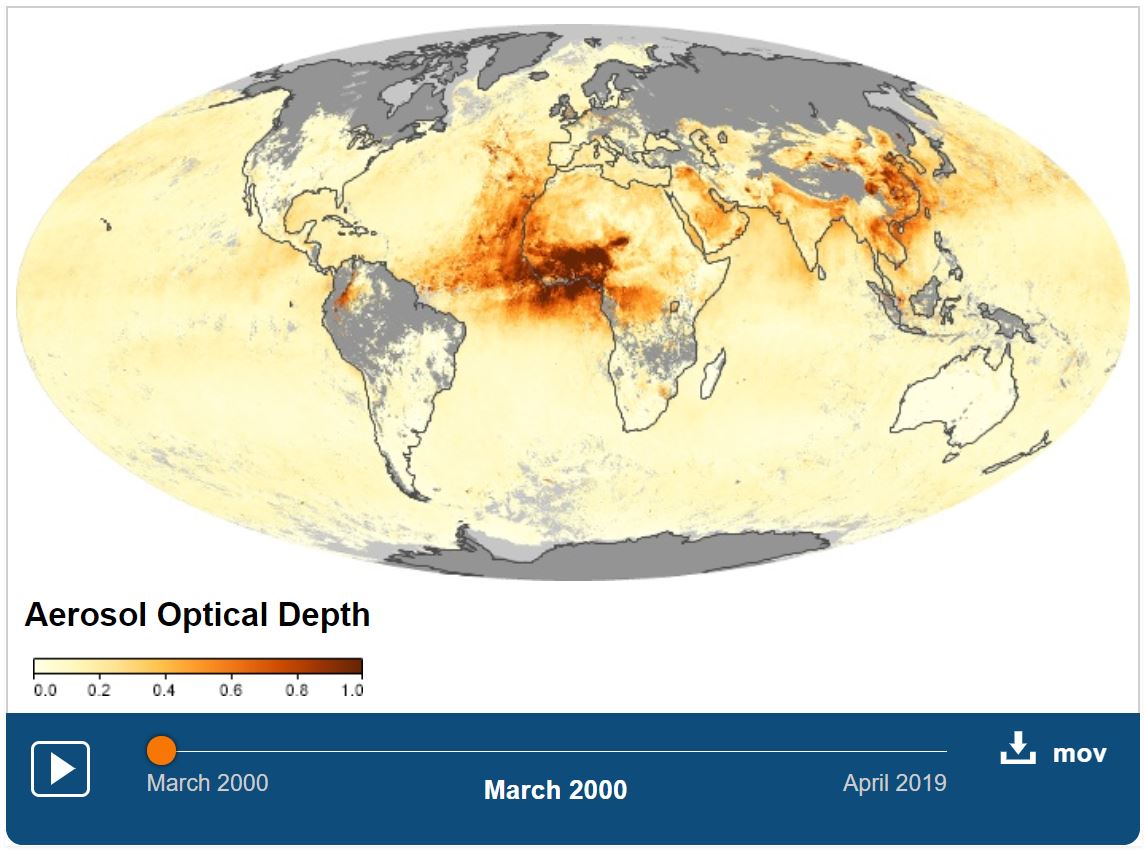 Aerosol absorption and reflection is largely dependent on the color and composition of these suspended particles. Brighter particles, like pure nitrates and sulfates, usually reflect radiation and increase the amount of scattered light. Aerosols and the clouds they form reflect approximately 25% of sunlight back to space. After the eruption of Mount Pinatubo in the Philippines in 1991, sulfate particles, partially produced from the more than 20 million tons of sulfur dioxide released by the volcano, lowered global temperatures by approximately 0.5 degrees celsius for about two years. Temperature-altering eruptions like this one occur about once every 10 years, but aerosols are not as evenly distributed as greenhouse gases, so their impacts tend to be greatest at a regional level. Darker aerosols, like black carbon, absorb large amounts of light and warm the atmospheric layer carrying them, but simultaneously cool the shaded surface below them. Human-made aerosols, which significantly increased following the industrial period, have counteracted some of the Earth’s surface warming, which would have occurred with just well-mixed greenhouse gases.

Aerosols also impact climate change through the complex interactions that lead to cloud formation. Aerosols serve as the tiny seeds which begin the condensation process, and are referred to as cloud condensation nuclei. Natural aerosols are most common in environments with clearer skies, whereas hazier environments have higher concentration of polluted, water-soluble particles. Clouds forming in polluted environments have higher quantities of smaller aerosols for water to condense on, which makes these pollution-rich clouds scatter and reflect more light. This means they block sunlight and lead to a net cooling. In other cases, black carbon has caused cloud droplets to evaporate over the Indian Ocean and in the smoke-filled Amazon, warming the surrounding atmosphere.

The map shows how aerosol emissions have changed over time. Anthropogenic emissions have increased in Asia as a result of industrialization and urbanization. Satellites can detect grouped aerosol clouds over northern Pakistan, Bangladesh, and northern India, in a region known as the Indo-Gangetic plain. Aerosols in this area are comprised of dust mixtures originating from the Thar Desert as well as pollution resulting from the region’s high population. Eastern China also produces dense aerosol layers as a result of its rapidly growing urban areas and elevated amounts of burning coal. They have declined in Europe and North America since factories moved to developing nations and Western countries implemented stricter regulations against air pollution.

Depending on the weather conditions and season, aerosols can reach almost anywhere on the planet’s surface. In the Northern Hemisphere, they can be found over arid regions and deserts. In the Southern Hemisphere, significant amounts of soot and smoke are released in Central Africa and the Amazon as a result of slash-and burn-agriculture. Fires also leave many forests in Canada, the United States, and Russia ablaze during summer months, increasing aerosol concentration.

Aerosols pose a high degree of complexity since efforts to remove them and decrease air pollution could simultaneously revert the ways in which they help to mitigate the effects of global warming.