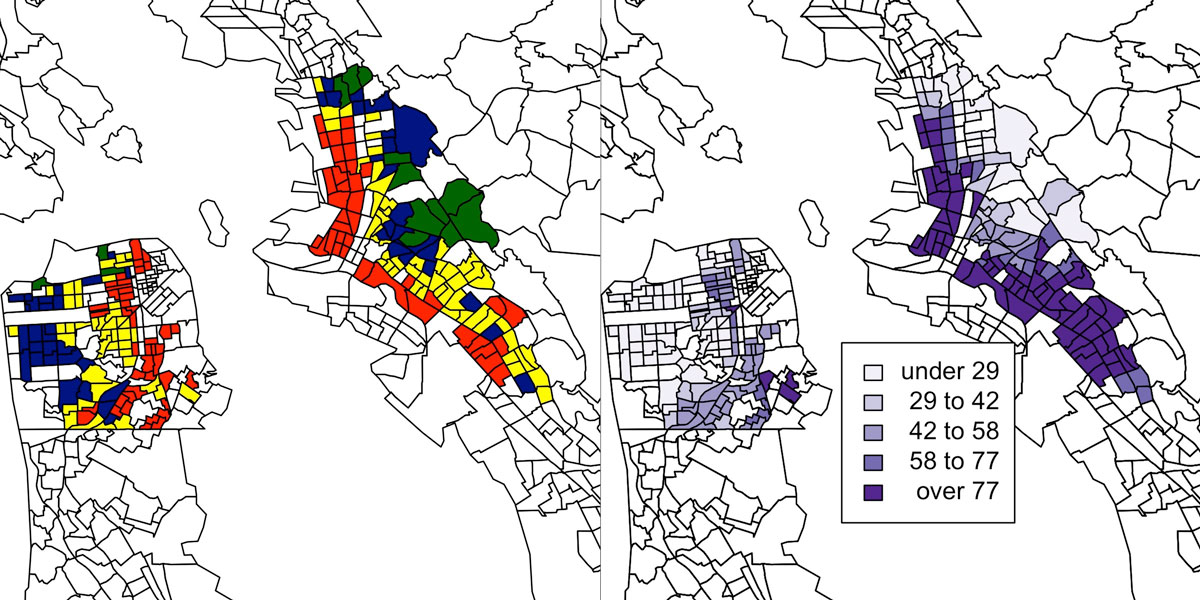 Not only is your zip code an indicator of your economic destiny, but new research shows it also affects your physical well-being. In a study published earlier this summer, a team of researchers at the University of California, Berkeley-University of California, San Francisco Joint Medical Program found residents of historically redlined, predominantly Black neighborhoods are more than twice as likely as their peers to visit emergency rooms for asthma attacks.

The practice of redlining began during Franklin D. Roosevelt’s New Deal, when the Home Owners’ Loan Corporation (HOLC), a federal agency tasked with refinancing home mortgages, color-coded neighborhoods in 239 cities to assess credit risks for potential loans between 1935 and 1939. Surveyors used green for “best,” blue for “still desirable,” yellow for “definitely declining,” and red for “hazardous.” Neighborhoods deemed “hazardous” followed a typical pattern: they were often primarily African American, though some had large Catholic, Jewish, and Asian and southern European immigrant populations. It didn’t stop there — cities and real estate agents adopted “restrictive covenants,” in which they agreed not to offer loans or sign housing contracts to “undesirable” communities.

The consequences of the maps created by the HOLC were devastating. They restricted the movement of minority populations while effectively preventing the flow of capital into low-income neighborhoods. In so doing, redlining concentrated poverty in communities of color. To this day, 3 out of 4 historically redlined neighborhoods 80 years ago are still struggling economically, another study shows.

Researchers obtained HOLC risk maps for 8 cities in California from the University of Richmond’s “Mapping Inequality” website. They then compared the risk ratings for census tracts with the corresponding number of emergency room visits for asthma, which is one of the most common chronic illnesses afflicting children. Drawing from local demographic statistics from the 2010 census, they calculated that residents of redlined neighborhoods were 2.4 times more likely to go to the ER for asthma than residents of green “low-risk” areas.

Moreover, researchers compared air quality ratings for each census tract using a state data mapping tool. They found yet another link between redlining and community health problems: the air in historically redlined neighborhoods also exhibited higher amounts of diesel particulate matter. The study’s findings are in line with research from last year at the U.S. Environmental Protection Agency’s National Center for Environmental Assessment, which concluded that people of color are more likely to breathe polluted air than white communities.

These maps show how comprehensive policy-making requires a deep understanding of historical circumstances surrounding an issue. The researchers hope further studies continue to link contemporary health problems to historical factors such as redlining.