Migration. It’s an adaptation that has given many different animals an impressive competitive advantage. Rather than risk starvation in the winter, many species opt to move instead. Animals like the blue whale, the monarch butterfly, the arctic reindeer, and the blue wildebeest all participate in this annual march toward greener pastures, better breeding grounds, or plentiful prey. However, no other animal migrates quite as well as the bird. With nearly 40% of all bird species committed to the move, birds are the globe’s greatest and farthest traveling migrants. The Arctic Tern holds the record for longest trek, making an annual 44,000 mile (71,000 km) journey, though, other bird species aren’t far behind. Unfortunately, as climate change progresses, these migrations are suffering.

In North America alone, an estimated two thirds of bird species are at risk of extinction from climate related complications. As the weather patterns shift, so do migration patterns, and not all species will survive. Because birds live within an ecosystem, every change is felt along the entirety of the food web. However, these changes can be hard to see. They happen slowly over years of continued stress, meaning the new behavior may not be immediately perceived as different. To help visualize migratory shifts in North American birds, the Audubon Society decided to map it.

Scientists within the Society have compiled decades worth of data on bird sightings and observed behavior in order to identify the current “ranges” for 604 North American bird species. Then, various climate models were used to map and predict how these species’ ranges will change in the warming world. 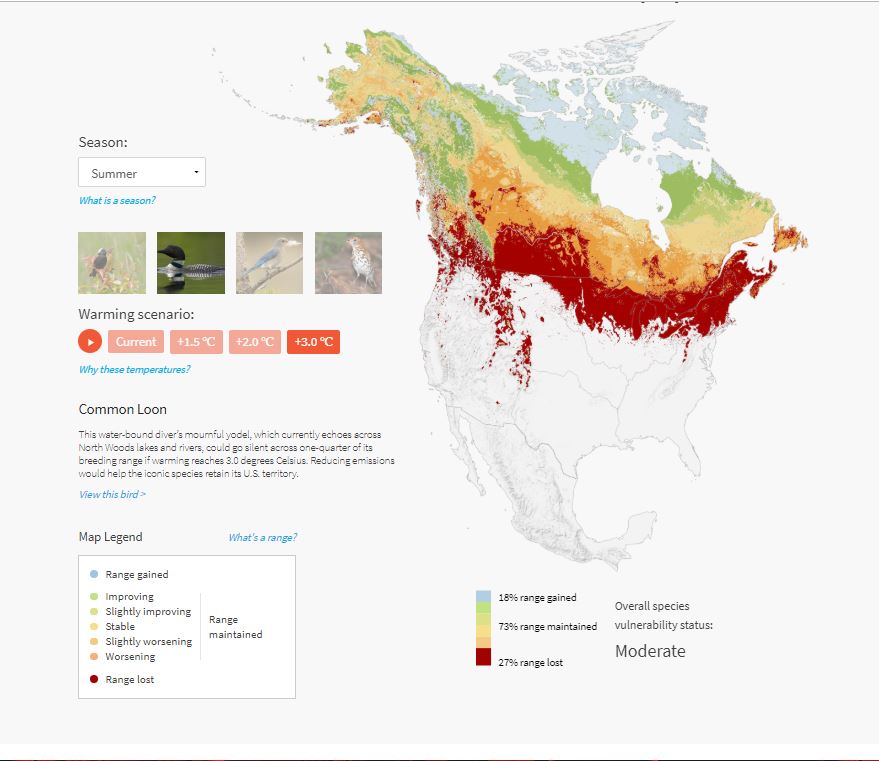 The result: a series of maps detailing selected species and their varied futures. Each species is depicted by shaded regions on the map of North American . Their current range is shaded in yellow, while their predicted range shifts are coded by color: blue for gained, yellow for maintained, and red for lost. Three climate models are then shown in Centigrade, displaying the effects of 1.5, 2.0 and 3.0 degrees of warming on these species. A note in the legend regarding the chosen temperatures reads: “Scientists agree that we should take immediate action to hold warming at 1.5 degrees Celsius or else face increasingly dire consequences. If we do nothing, 1.5 degrees is imminent, 2 degrees could happen as soon as 2050, and 3 degrees could occur by 2080″. Unfortunately, most species’ maps are dominated by huge swathes of red as the temperature increases.

Beyond the map is a collection of information on the species. Their conservation status, phylogeny, and general behavior is all listed, alongside a collection of cheery recorded calls.  Within a paragraph, you already have a new found love for this precious animal, and by paragraph two you’re mourning the loss of such a unique creature. 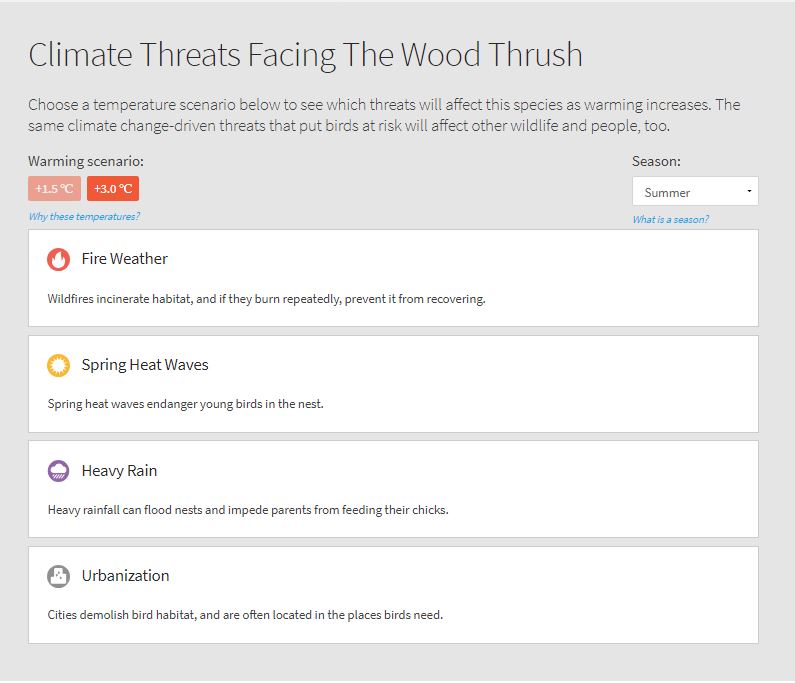 A list of threats to the species is included as well. For the example of the Wood Thrush, these are identified as “Fire Weather”, “Spring Heat Waves”, “Heavy Rain” and “Urbanization”. These threats are similar across most other birds, highlighting the central issues of the Anthropocene. A haunting warning on the map reads, “The same climate change-driven threats that put birds at risk will affect other wildlife and people, too”.

Although the tone of this map is harrowing, there is a final note of positivity, reminding the world that there is still hope. Reducing carbon emissions to keep warming below 1.5 degrees Celsius could improve the chances of survival for many different bird species, calling the individual to make their pledge to the environment!