The data shows a correlation between increases in population and increases in auto-emissions. In fact, emissions from 1990 to 2017 have grown at a faster rate than the human population, meaning that emissions per person have increased in the past thirty years. Areas with larger populations, such as New York City, emit higher concentrations of automotive-based carbon dioxide. While New York City accounts for the largest total share of vehicular emissions, the emissions per person are considerably lower due to increased reliance on public transportation. Residents in areas such as Dallas, Texas have limited access to public transportation which increases the reliance on vehicles, thus increasing CO2 emissions per person. 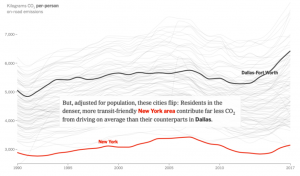 In an effort to reduce automobile emissions, several cities in the United States have proposed solutions such as expanding public transit or improving the walkability of residential areas. New York City is expected to be the first city to introduce congestion pricing for vehicles entering Manhattan this year.

To learn more about vehicle emissions, and to access the interactive emissions map, visit: https://www.nytimes.com/interactive/2019/10/10/climate/driving-emissions-map.html