In this map created by Erin Davis, the average colors of the U.S. by county are revealed, showing drastic changes in land cover as seasons pass. Most notably, we see the ways in which some landscapes remain consistent (for instance, Hawaii), while others change drastically (the Northern United States). If you look closely, particularly in Texas and Northern California, you are able to see quick white blips that represent short-lived snow storms—which are quite different in comparison to the season-long snow coverage seen in the Midwest. Aside from snow, other subtle changes are present. Interestingly, the land around the Mississippi River visibly changes color throughout the year. In fact, much of the Eastern United States breathes brown to green depending on the season.

The map was created with Sentinel-2 satellite imagery, which possibly posed some challenges for the creator, Erin Davis. Notice how the dates on the map are not consistently one month apart. This may be due to the fact that the Sentinel-2 satellite does not take pictures of the United States every day, but rather every 10 days. Additionally, just because Sentinel-2 takes pictures every 10 days does not necessarily mean that all these images are useful. For instance, look at the image below. 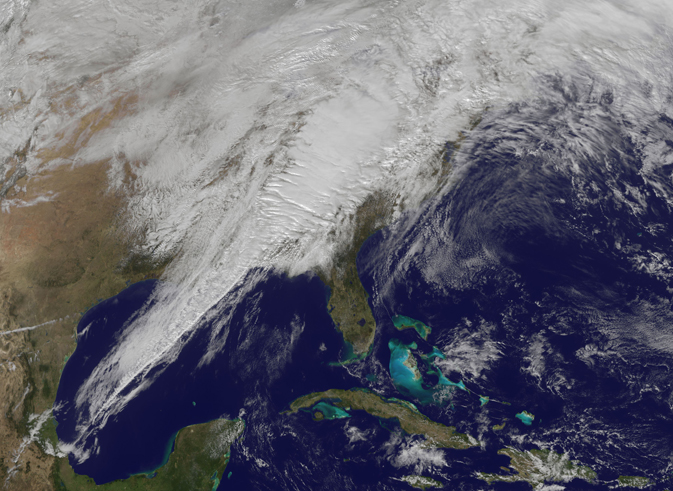 In the satellite image above (taken by the NOAA’s GOES-13 satellite), much of the land is obstructed by clouds! When trying to create a map of the average colors in the U.S., you must be able to find satellite imagery where clouds are not present. Sometimes, this may not be possible when trying to find specific imagery within a given time frame (much like “Average Colors of the USA”).

In addition to this map of the United States, Erin Davis has created maps for many different regions of the world depicting average colors, as well as a world map. Look at them all here!