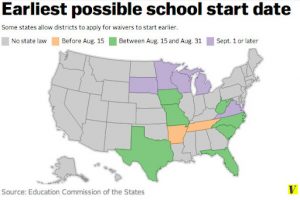 Summer is coming to a close and students are heading back to school. However, not all students will be heading back to the classroom at the same time. Interestingly enough, the tourism industry plays a key role in determining start dates in some states, according to this map above from Vox.

In Minnesota, Wisconsin, and Michigan, state tourism organizations lobbied for later start dates so students and their families can travel as late as possible into September. In Virginia, the King’s Dominion Law, named after an amusement park, requires schools to start after Labor Day. However, states that start school later have to end the school year later, which can put students taking Advanced Placement exams at a disadvantage, since they have a set date towards the end of the school year. 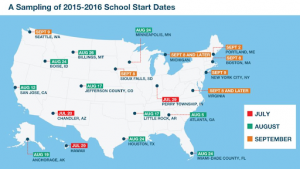 The map on the left depicts a sampling of school start dates in the 2015-2016 school year. The article explains some of the benefits of starting the school year earlier, such as being able to complete the first semester before the December holiday break, allowing for a Fall break, and having the school year end by Memorial Day so that students and staff members can take summer courses.

No matter when you head back to school, AGS hopes you have a great school year!