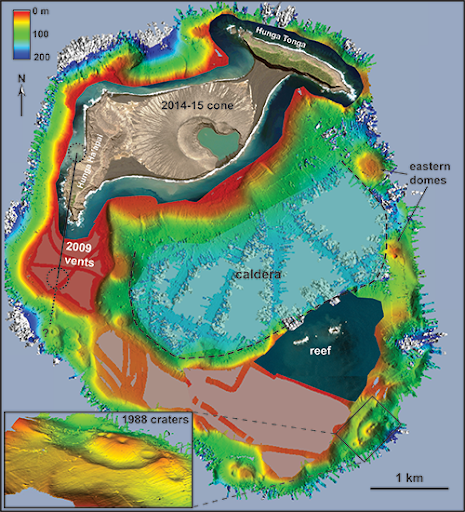 Many of us watched the footage of the massive eruption that occurred on January 15, 2022 in the island nation of Tonga. The submerged caldera known as Hunga Tonga is one of many volcanoes in the Tonga-Kermadec volcanic arc that formed from the subduction of the Pacific Plate beneath the Indo-Australian Plate. The Hunga Tonga Caldera is unique in many aspects, such as its rare Surtseyan eruption style where hot rising magma quickly reacts with shallow salt or fresh water in a powerful explosion.

NASA has since reported that this eruption was hundreds of times more powerful than the Hiroshima nuclear explosion. Dr. James Garvin, Chief Scientist of NASA’s Goddard Space Flight Center, shared the preliminary estimate of the strength of the Hunga Tonga caldera eruption to be between 4 and 18 megatons of TNT. For comparison, the Hiroshima bomb weighed in with about 0.015 megatons and Mount St. Helens exploded with 24 megatons in 1980. We found some great satellite images of surrounding islands before and after the eruption that can be found here.

The island of Hunga Tonga Hunga Ha’apai which signifies the only exposed portion of the caldera, used to be two disconnected islands prior to 2015. Ironically enough, the eruption that formed the landbridge between these two islands began exactly seven years ago to the day, on January 15, 2015. The 2015 eruption lasted five weeks befofe it had finally ceased, and a circular area of land 2km across and 120m high was left. Now seven years later, these uninhabited islands are once again disconnected after being partially obliterated in this month’s eruption. This phenomenon is displayed well in the maps below from NASA’s Earth Observatory. 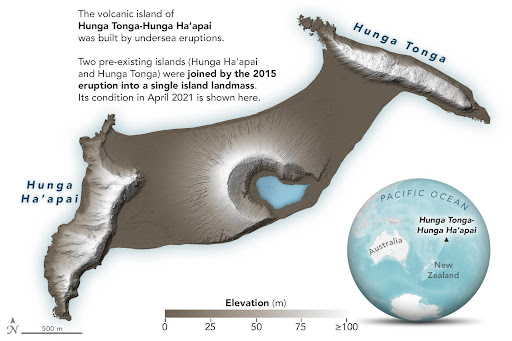 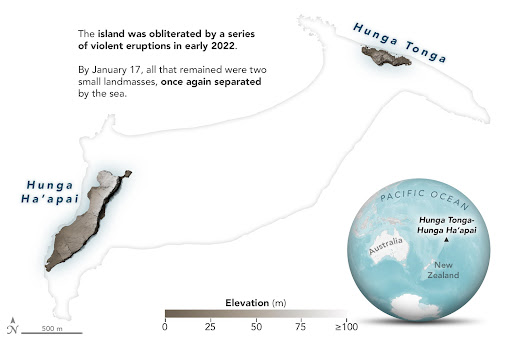 When the islands were connected by smaller eruptions in 2015, scientists created a seafloor map using a WASSP multibeam sounder with a resolution of 1m. The bathymetry revealed a large depression about 150m deep and 4km x 2km wide. As mentioned above, the only exposed area of this caldera is the island. This “Surtseyan island” is a geological phenomenon that actually offers insight into the role of surface waters and volcanic landforms on other planets such as Mars. Most Surtseyan islands erode away within a few months or years. In this case, scientists had the opportunity to study this new island for seven years before it erupted in a similar process that created it. Satellite imagery provided by BBC shows the island leading up to the explosion, and the remaining land mass in the aftermath.

The pressure shockwave from this eruption reached the other side of the world and was even visible from space. Barometers in the United Kingdom wiggled as the explosion caused an increase in atmospheric pressure of about 1.5 millibars. The explosion also triggered a tsunami warning that upturned boats in Japan and parts of the west coast of the United States. While the island of Hunga Tonga Hunga Ha’apai was uninhabited by humans, many other islands in the Tongan archipelago are. The biggest concern is assessing damage in these places and getting assistance to those residents. The explosion cut off internet and communications to Tonga, so new information from the ground is still coming through daily.

Click here to view a video of the Hunga Tonga caldera bathymetry before the eruption.