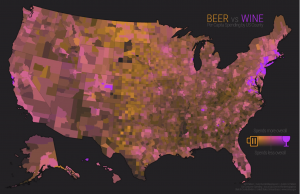 This image was created by cartographer John Nelson as a part of a StoryMap in which he examines the spending habits on wine versus beer per county in the US.

On this map, more vibrant colors represent more money spent on wine and beer, and whether the county is more orange or purple represents whether wine or beer is more popular. This is the most complete way to show this data according to Nelson because you can account for whether or not counties are actually spending money on alcohol in the first place. Look at the counties in the south, particularly throughout Mississippi and Alabama. There are a few there that are almost completely dark, meaning that there is not a lot of money being spent on wine or beer. 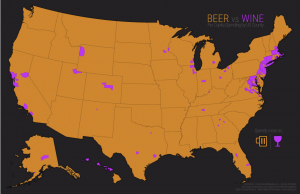 In this map, it clearly looks like beer dominates the country. We now know that not all orange counties are created equal.

An interesting take away from these maps is that there is a strong wine culture on the East Coast from the New York City metropolitan area extending up into the Boston region. That is one of the only areas in the United States that not only prefers wine to beer, but spends money on wine as well.