Earlier this year, we put out a Map of the Week about California wildfires and the extent of destruction they have caused in the past few years. 2018 was the state’s worst year in wildfires, and 2019 may be similar. Already, the area just north of the U.S. on the West Coast, British Columbia (B.C.), is experiencing wildfires. Now, in the immediate aftermath of two record breaking years for fire in that area, British Columbia joins the West Coast in bracing for another summer of wildfires.

To this date, there have been numerous fires in this year alone. These fires spread fast and typically have devastating environmental consequences. For example, the “Lejac Fire” was discovered to the east of Fraser Lake Village in B.C. on May 11th and by the following morning, the blaze had grown to 260 hectares. To give perspective, a perfect square of 100 meters by 100 meters equals one hectare, and one hectare is equivalent to roughly 1.87 football fields.

As of May 13, the Lejac fire was roughly 50 percent contained. Kevin Skrepnek, B.C.’s chief fire information officer has said, “What has been a little unusual, especially the last five days, we’ve had such hot and dry weather that has definitely led to a bit of an increase in fire activity and definitely has increased the aggressiveness of some of the fires we’re seeing.” (Star) The amount of rain that falls over the province between May 20 (May Long Weekend) (https://www.statutoryholidays.com/victoriaday.php) and July 1 (Canada Day) (https://www.statutoryholidays.com/canadaday.php) can determine how the rest of the summer fire season will play out, Kevin Skrepnek added. 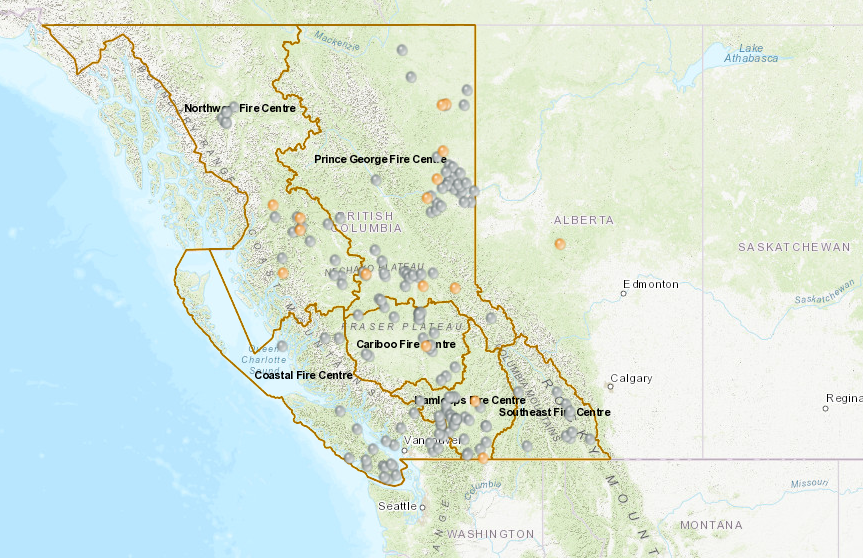 The map above depicts where wildfires are happening around British Columbia to this date. Grey dots represent contained fires, and yellow dots represent active fires. You can view the interactive map showing all of these locations here:  https://governmentofbc.maps.arcgis.com/apps/MapSeries/index.html?appid=ef6f11c8c36b42c29e103f65dbcd7538

Similar to  in California, wildfires play a critical role in B.C.’s boreal forests. Certain tree species such as the Jack Pine and the Lodgepole Pine rely on high temperatures from naturally occurring forest fires to release their seeds and grow new trees. Although somewhat necessary for the health of forests, the fires come with a cost to people living in their path of destruction. For instance, “in 2017, fire ripped through 120 buildings in the B.C. towns of Ashcroft and Cache Creek. The year before, wildfires devastated Fort McMurray, Alta, forcing 80,000 people to flee as flames engulfed their city.” (Star) On top of the people who are affected in the immediate area of the fire, smoke emitted from the forest burning can cause harm to people that are hundreds of miles away. This comes in the form of respiratory problems, and it can be especially difficult for people with asthma and other respiratory ailments that require clean air. In 2018, “smoke from fires in interior B.C. blanketed Vancouver for weeks, harming people with asthma and other respiratory challenges.” (Star) Additionally the dollar cost of wildfires is astronomically high. In 2018, British Columbia saw, “more than 2,100 wildfires burn a record-breaking 1.35 million hectares of land.” (Star) Estimates over the cost of such a great amount of wildfire have shown to cost the province $615 million.

There is the question of whether these extreme fire circumstances have been caused by climate change. The answer is that it may be due to re-occurring increased dry periods. That is because, “since the 1970’s, the average area burned in Canada each year has almost doubled. In B.C. both the 2017 and 2018 wildfire seasons broke records in terms of area burned.” (Star) However, the probability of getting three bad fire years in a row is low, according to Mike Flannigan, professor of wildland fire at the University of Alberta.

Stopping wildfires involves a combination of responsible actions by people and creating proper fire safety protocols. In previous years, firefighters from around the world were needed to fight the blaze ranging from as far off as Australia. So far in 2019 this has not been necessary because B.C. firefighters have been able to handle the blaze. One way that B.C. prevents wildfires is by using fire in a process called prescribed burns. Prescribed burns entail setting small and controlled fires and eliminating heavy shrubbery and brush in a controlled situation so that there will be less fuel for a forest fire. This relief can make a huge difference in how large a wildfire will get. For controlling fires, in most cases ground crews are sufficient. However, in extreme cases air units are needed to drop water or fire retardant from above to control the burn. In other instances when the wildfires do not pose a threat to people or property, the fires are simply monitored and not fought at all.