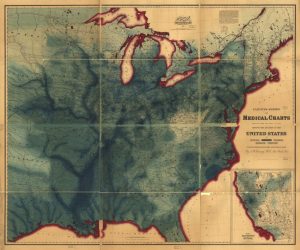 Inspiration for this week’s Map of the Week came from maps of diasease at the Library of Congress. Published in 1874 by L.H. Carney, six maps showed the distribution of disease in the eastern region of the United States. The purpose of these historical medical maps was to understand trends of areas infected. While these medical maps were not the first maps of disese published, they do show trends in spatial distribution of early infectious diseases. The prgoress that has been made by medical professionals and geographers since then is astounding, and its history of medical cartography will be further looked at as part of this Map of the Week.

At an age where maps are live streamed with COVID-19 case updates, we ask ourselves: How did we get to this point in mapmaking? Medical cartography has changed greatly over the centuries due to increases in technology and Geographic Information Systems (GIS) which has made geographic models easier to access. Through these maps, specialists can investigate etiology and predict populations at greater risk. 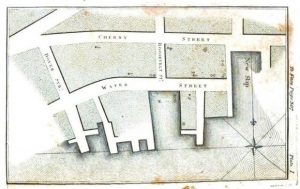 Disease cartography can be dated back to the 17th century where epidemics like the Yellow Fever outbreak in New York, and Cholera in Europe were mapped. The map pictured above depicts Yellow Fever clusters along sewage and waste locations. The theory that Yellow Fever outbreaks were correlated with unclean sewage sites proved incorrect since it was a mosquito-borne disease. However, it led scientists to better understand the relationship of disease between persons and environmental factors. By including environmental elements, scientists were able to hypothesize the cause of the disease. 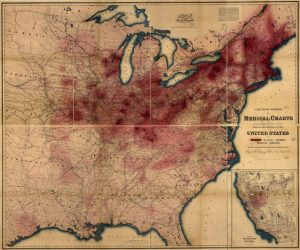 Historically, maps depicted the location of infectious disease outbreaks with limited analysis on its origin. L.H. Carney produced six medical charts on typhoid, pneumonia, rheumatism, tuberculosis, and malaria in eastern United States in the late 19th century. Shading in the location of outbreaks, Carney’s medical maps provided analysis on the severity of the disease based on population density and urbanized areas. For example, the map of malaria shows West Virginia unaffected, similar to the beginning states of the 2020 pandemic. Another medical chart of Carney’s shows the distribution of tuberculosis outbreaks in eastern U.S. near river systems and major population centers. The spread of the disease accelerates within these densely populated areas showing high rates of infection in close living conditions like cities. The spread of COVID-19 today shows similar patterns in urbanized areas. Whether correlating population density, waterways, and other factors to the spread of disease, historical maps like these can mirror trends of outbreaks today. 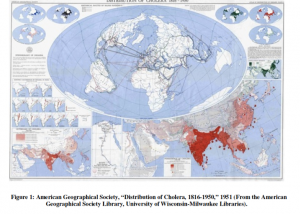 The American Geographic Society (AGS) played a crucial role in the development of medical atlases in the 1950’s. The Medical Geography Department under Jacques May initiated efforts to publish an Atlas of Diseases. This was a first global look at the spatial distribution and severity of disease from a global level. Published by a medical scientist and geographer Dr. May, often referred to as the “Map Doctor”, published the “first comprehensive record, in maps and charts, of the world-wide distribution of human ailments.” Seventeen maps displayed the correlation between disease and natural environmental factors in a coherent manner the public could understand. 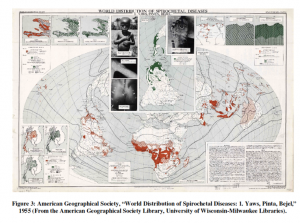 AGS, sponsored by the U.S. Office of Naval Research, set precedence for the systematic survey of disease and natural and environmental factors. Historically, maps simply showed the location of outbreaks. The Medical Geography Department exclusively selected diseases robustly researched and with strong correlations of environmental indicators. Infectious diseases like cholera, spirochetal, leprosy, and even human starvation were mapped. AGS mapped a “global scope of disease” as a historical first, establishing lasting impressions on the standards of the cartography of disease.

Medical geographers were able to expand map analysis to include statistical references in a cartographic form in later years. The last National Atlas published in 1978 on United States’ demographics and statistics set another standard of maps within the medical community. The National Atlas used demographics and hospital statistics from 1970 Census to create a presentable map on the distribution of medical professionals, hospital beds, and death rates across each state to show analysis on the cost and service provided by health providers. 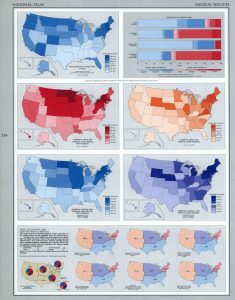 The course of mapping diseases has rapidly advanced over the last few decades. Advancements in mapping technologies contribute to digitalizing the distribution of diseases globally. Collaboration between medical professionals and geograhers map the rate of contagion and GIS can cross reference data across multiple models to examine causality. In recent years, geospatial models include distribution of infected persons, and cross references for topography, environment, public health facilities, and economic factors. These models effectively showed the potential for the Zika virus outbreak in 2015 to spread in mosquito populated areas. Showing the trends and preventions of Zika and many other infectious diseases, the spread of disease is predicted by geography.

In today’s times, it is more apparent why mapping infectious diseases is crucial to understanding its geographical spread and causes. With the COVID-19 outbreak, people are interested in the spatial movement of the virus. They even contribute to crowdsourcing platforms that show disruptions in social distancing guidelines, nearby outbreaks, PPE equipment, and more. But would the public have been this involved in geography and the maps of disease if it weren’t for the virus? John Hopkins is one of many digital maps that tracks the in-time spread of COVID. The threatening rise of numbers has generated a new audience that before wouldn’t have thought twice about maps on infectious diseases. The visual aspect of media that use maps to update their audience on the spread of COVID is popular across all platforms. Every day, there are updated maps that display positive cases, death rates, and social distancing guidelines. Since the peak of the pandemic, AGS continues to educate its audience on the various types of maps produced that relate to the pandemic. Through our DailyGeo news highlights, we examine issues stemming from the virus, such as social distance rankings, COVID testing sites, healthcare disparities, and more. By presenting this information within the context of a map, our audience can visually digest important issues raised from the outbreak.

Since cartographers began mapping infectious diseases, the advancements in other elemental factors on maps have contributed to the accuracy of analyzing diseases trends. While L.H. Carney and his predecessors mapped local outbreaks and their potential causes, AGS and other forerunners greatly advanced the ability of the medical community to research the geographical spread of disease with geographers and cartographers. In today’s current age of the pandemic, maps serve a crucial role in predicting the spread of the virus. We are living in the future of the cartography of contagion, and watching the implications of tracking disease on digital maps in real time.