The United States Census Bureau conducts their census survey every ten years. Mandated by the Constitution, the census gathers data on people living in the U.S. in order to apportion seats in Congress, determine Electoral College votes in each state, and allocate over $600 billion dollars of the federal government’s budget for community services such as building roads, funding health care programs and educational services.

Census data accuracy is fundamental to ensuring a fair democracy. Undercounting the population doesn’t just result in a misrepresentation of American residents, but could also mean the loss of a state’s congressional member and could shift power from urban areas to rural areas–which already hold disproportionately higher political power due to the Senate and Electoral College.

Declining census response rates in marginalized communities enables politicians to draw skewed legislative districts that further weakens the political power of these communities. Immigrant communities are among the populations in the U.S. most often undercounted in census data. According to the Pew Research Center, about 61 percent of undocumented immigrants live in just 20 U.S. cities. 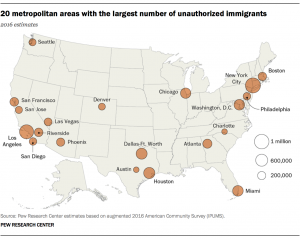 The purpose of the survey is to generate data on all people living in the United States, regardless of legal status. The Trump Administration attempted to include a question regarding citizenship status on the 2020 census, a June 2019 report conducted by the U.S. Census Bureau predicted could result in a potential 2.2 percent drop in total self-response rates. The ACLU and the Brennan Center successfully challenged the citizenship status question on the grounds that it would have intentionally discriminated against immigrant communities of color, which resulted in the question’s removal from the 2020 census survey. However, confusion surrounding the citizenship question has stoked mistrust in the federal government and fear of deportation for those participating in the census.

The 2020 census is the first survey to be conducted largely online via self-response, which also raises issues of data security and accessibility barriers. Self-responding can be done in three ways: online, by phone, or returning the census form by mail; in the case of households that do not respond, the Census Bureau sends surveyors door-to-door, which is oftentimes difficult and expensive. Because of COVID-19 and insufficient funding, door-to-door counting has been delayed or halted, increasing the potential for an undercount. 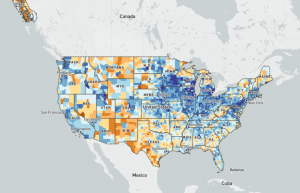 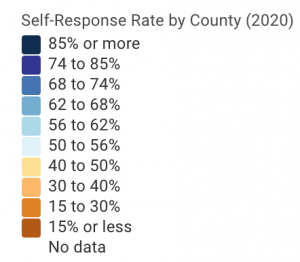 Using Texas as an example, the state with the largest shared border to Mexico, these maps can provide some insight into how a lack of self-responding can negatively impact immigrant communities. According to American Immigration Council, Texas is home to 4.9 million immigrants, 51 percent of which come from Mexico. 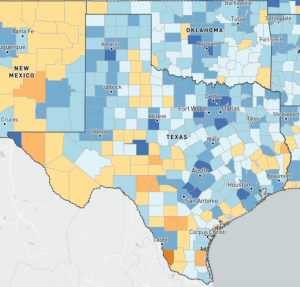 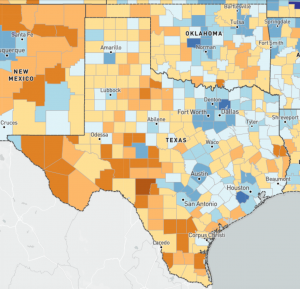 The map of Texas on the left shows the self-response rates by county from the 2010 census and the map on the right shows the self-response rates by county for the 2020 census. (*The 2020 census is not complete and is still on-going. Rates are subject to change as data comes in.) It can be inferred that the fear of the citizenship question has discouraged many households from self-responding; compounded with COVID-19 and the inability for surveyors to go door-to-door, it is likely that the 2020 census will see a large undercount.

Undercounted communities across the country would see reduced funding for public services and a change in the political/voting landscape. Assuring an accurate count is not only imperative to the democratic process, but is vital to the progress and well-being of communities, especially underserved communities of color.

The Brennan Center has taken on a few campaigns to promote more participation in the 2020 census. They are urging the Census Bureau to advertise the absence of the citizenship question as well as ensure confidentiality by enforcing privacy laws. Robert Goldenkoff, the director of strategic issues at the Government Accountability Offices (GAO) has stated that the Census Bureau does not have room to make any mistakes, as it would be a “10-year mistake,” and result in bad data that directly impacts funding streams and representation in government.

To participate in the 2020 Census online, please visit https://my2020census.gov/.

For more information regarding the issues around this year’s census, check out these resources: