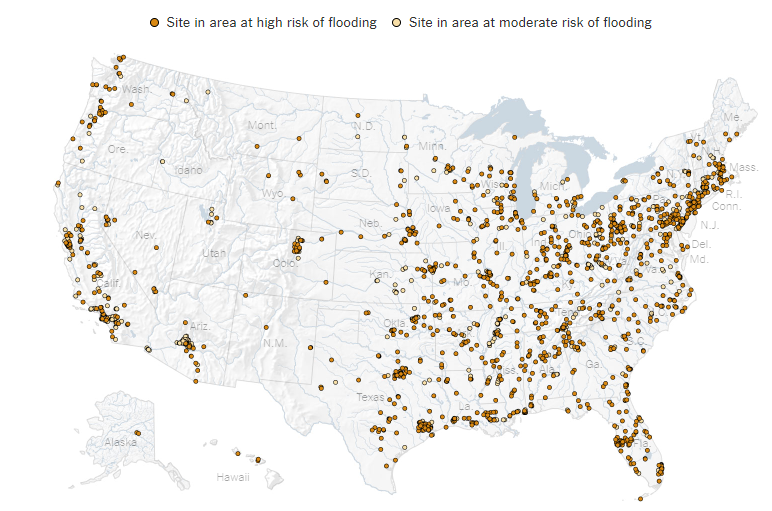 This map shows the over 2,500 sites across the US that handle toxic chemicals and are located in flood-prone areas.

A report from the Climate Science Special Report last year warned extensively about the increasing intensity and frequency of flooding due to climate change and rising sea levels.

In the 2017 publication, CSSR noted that, “Global Mean Sea Level” (GMSL) has risen by about 7-8 inches (about 16-21 cm) since 1900, with about 3 of those inches (about 7 cm) occurring since 1993.” This sea level rise is causally related to the intensity of storms, and a projected increase in the intensity of hurricanes in the North Atlantic could increase the probability of extreme flooding along most of the U.S. Atlantic and Gulf Coast states beyond what would be projected based solely on rising sea level.

Across the country there are thousands of special sites that are designated to handle toxic chemicals, whether for commercial use or other. In every state, these sights face the same environmental obstacles that the rest of the planet is facing, including the increasingly widespread issue of severe weather and flooding. According to the NY Times, “Anchored in flood-prone areas in every American state are more than 2,500 sites that handle toxic chemicals. About 1,400 are located in areas at highest risk of flooding.” 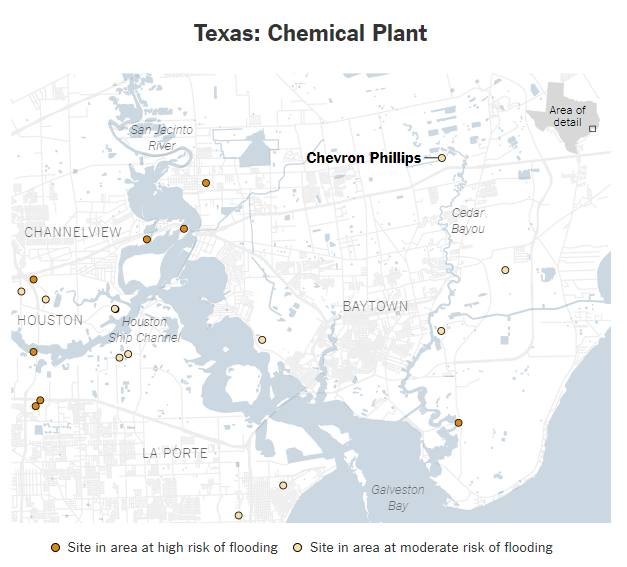 This map is of a southeast region of Texas called Baytown, where the Chevron Phillips chemical plant is.This site fell victim to Hurricane Harvey, and as reported by the NY Times, “34,000 pounds of sodium hydroxide and 300 pounds of benzene – both highly toxic – had escaped through a damage valve” from the plant. This spill released just one of many chemicals that filled the streets of Houston and other cities in the days after Hurricane Harvey and its torrential rains. This site would usually not be at a great risk for flooding, being defined by the government as having a 0.2 percent risk for flooding in any year. However, the Harvey flooding marked the third time in three years that the Chevron Phillips facility blamed heavy downpours for chemical leaks. No planning anticipated how severe the weather would become in recent years and how frequent the US would be getting extreme weather in this day.

“There are more than 21,600 facilities across the country that handle large amounts of toxic chemicals harmful to health or the environment. Of those sites, more than 1,400 were in locations of the Federal Emergency Management Agency considers to have high risk of flooding. An additional 1,100 sites were in areas of moderate risk. Other industrial complexes lie just outside these defined flood-risk zones, obscuring their vulnerability as flood patterns shift and expand.” Flood patterns shifting is one obstacle that facilities have to plan ahead for, because a flooded chemical plant is not good for anyone.

These maps help researchers and private companies visualize where flood prone areas are, which is very important these days. Waterfronts are changing as a result of sea level rise. In the past, chemical sites were purposely built close to rivers and oceans, for transportation/ trade and cooling water. This model does not work anymore due to rising sea levels and more severe weather. With maps like these, companies can better plan for severe weather, and choose to establish their plants in a more resilient location. Chemicals policy director Tom Nelter of the Environmental Defense Fund agrees that, “Companies need to think carefully about the risks of flood, and the increased risks from climate change. Saying ‘We’ve always done it this way’ doesn’t work anymore.”