New developments from the Rhodium Group with analysts from ProPublica and The New York Times show insights into the effects of climate change on the United States landscape. With temperatures warming and changing rainfall patterns, temperate climates in the U.S. are projected to travel northward, impacting agriculture and livelihoods across the country. As the most habitable climate in the U.S. shifts northward, usually temperate regions will see extreme weather patterns, from extreme heat and humidity in the south to wildfires blazing in the west and sea level rise affecting the coasts. Agricultural production will also shift as regional climate changes and crop yields diminish.

In the recent paper, “Future of the human climate niche,” published in the Proceedings of the National Academy of Sciences, researchers examined the human climate niche–regions where temperature and precipitation have allowed for humans to live comfortably for the last 6,000 years. In the U.S., that niche, or the most suitable zone for humans, covers most of the southeast and midwest, and western coastal regions. However, as climates become warmer, that niche will dramatically shift northward towards Canada, making much of the southern half of the U.S. less comfortably inhabitable in the next 20 to 40 years. 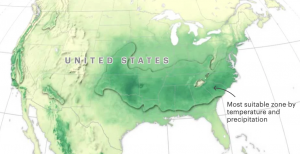 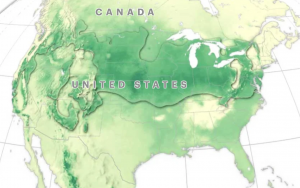 Areas in dark green are considered more suitable for humans. The map on top depicts the current human climate niche while the map beneath it shows the drastic shift of that niche as climate warms.

While heat is one of the biggest driving factors of the shifting niche, and some places in the South and Southwest are expected to reach 95 degree temperatures for half the year, heat alone is not the only detriment to human habitability. Extreme heat combined with humidity is projected to create dangerous regional “wet bulbs” by 2050. These wet bulb temperatures will make it difficult for the human body to cool itself which could result in increased rates of heat strokes and even death. This will also profoundly affect farmlands as food productivity is expected to fall and disrupt economic gains from the agricultural industry. 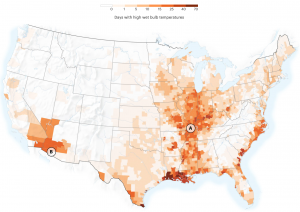 Darker orange areas correspond to more days with wet bulb temperatures. Areas around A will notice weather patterns similar to Louisiana today, while areas around B, typically drier regions, will have a huge uptick in humidity and heat.

As the Pacific Northwest is currently experiencing devastating wildfires, these large wildfires will become more commonplace with rising temperatures and longer droughts. By 2040 to 2070, the majority of the west, with some places such as the Rocky Mountains and Florida and Georgia, will experience more severe fires. 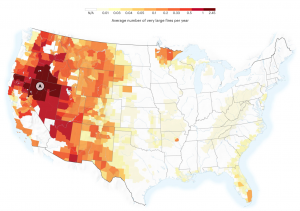 The darker shaded areas will experience more fires per year. Area A, rural counties in Nevada and Oregon, is assumed to see extreme fires that can burn up to 10,000 acres a day.

By 2040 to 2060, sea level rise will affect coastal lands along the U.S. borders, with the amount of properties submerged on the coasts increasing drastically. While sea level rise won’t affect a large portion of physical land, it will disproportionately affect millions of Americans that reside in densely populated coastal cities. 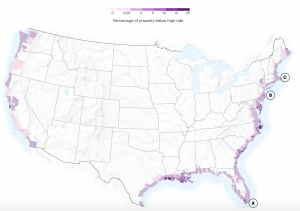 The darker purple shaded areas reflect the percentage of property below high tide. Some of the largest metropolitan cities sit on these affected areas, including Miami, New York, and Boston.

As climate change progresses, mitigation and adaptation efforts are no longer up for debate but are necessary to combat dangerous shifts in weather patterns. The information provided here has been adopted from Propublica. To learn more, visit https://projects.propublica.org/climate-migration/. The map story also offers a table of counties considered most at-risk to the issues mentioned above.