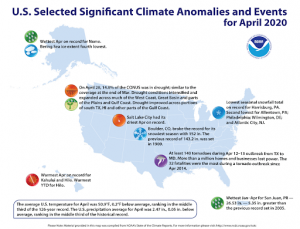 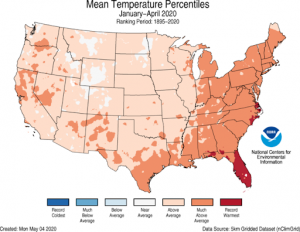 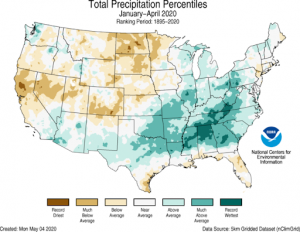 NOAA releases a monthly report on climate conditions, and anomalies that include many incredible maps to relay the data from the National Center for Environmental Information. These reports are part of the suite of climate services provided by NOAA to support informed decision making for the government, businesses, academia, and the public. These reports cover temperature, precipitation levels, natural disasters, and other climate measures that are tracked on a monthly period, as well as quarterly and yearly averages. NOAA uses satellite imagery data combined with ground truth data collected at multiple locations across the country. NOAA also works with the National Weather Service in compiling this data for use by any organization, or person that would like to utilize this free service.

When looking at the maps above we can see that there were many record setting anomalies in the month of April that shape policy decisions on local, state, and federal levels. Some of the most surprising and disastrous climatological issues occurred in the south and southeast parts of the country where over 140 tornadoes touched down from Texas to Maryland that caused 32 fatalities and damages of over 450 million dollars. Also from the map, we can see that the period from January to the end of April saw extreme temperature differences where many areas of the country saw the warmest temperatures on record, and that combined with record low precipitation levels in much of the West, the Great Basin, the Plains, and the Gulf Coast led to an extreme megadrought causing massive crop losses and economic hardship. Whereas many areas of the South spanning from Arkansas into the Northeast areas of Pennsylvania experienced record high levels of precipitation that led to flash flooding.

April has now been shown to be the second hottest on record, and the temperature levels are showing no signs of slowing down, as 2019 was the second warmest year on record and 2020 is on track to eclipse 2019. With these new climate challenges threatening to displace more people every year, there will have to be a new norm that will come along with how we view crop production, and fresh water supplies throughout the country, which are just exacerbated by the current pandemic. This will require a massive change in infrastructure, and the use of new technologies to keep up with the growing population. Climate change is here to stay, and reports like these will be paramount in deciding how the country must respond to these new challenges.

NOAA has been releasing these free monthly reports dating back to 1997. Those spoken about above are just a few examples of extreme climate events that are being tracked by NOAA, and I encourage all geographers interested in tracking the effects of climate change on the United States to visit their homepage referenced below to read the full reports.