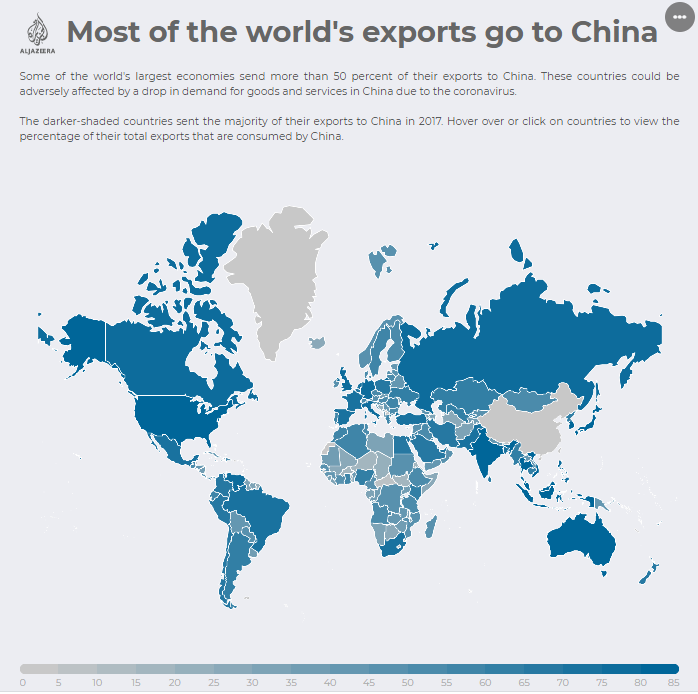 The coronavirus, or COVID-19, has severely impacted global businesses across the world. With over 75,000 confirmed cases and a death toll that has risen to over 2,000, the epidemic is sweeping closure of Chinese businesses and ports. More than 50 million residents have been quarantined since January in Wuhan, contributing to labor shortages and decreased production among many global supply chains. This Map of the Week shows the percentage of the world’s exports to China and the fragility of the global supply network due to the epidemic.

Most country’s export levels and global supply chains are connected to Chinese markets. By clicking on the link for the interactive map source, the map shows the majority of countries, especially in Asia, North/South America, and Europe have an average of 50% of their exports to China. The largest export-oriented countries, like U.S., Japan, and South Korea export more than 85% of their goods and services to China alone. Chinese markets play a key role in the distribution and consumption of global goods, as global firms depend on China’s population to buy and consume their goods and services. However, the closure of ports and delayed shipment due to the epidemic has dropped demand levels for imported goods. Since China is a leading trader of commodities, such as iron, oil, and copper, these industries are observing a decline in demand, too.

The quarantine of millions of Chinese citizens from COVID-19 has proven the fragility of the global supply chain network, as firms were unprepared for the supply chain disruptions and inventory loss. Multinational corporations have high levels of investment and production in China, and companies like Apple, Nissan, and Hyundai are forecasting a decline in sales due to closed production facilities. The rise of globalization has its benefits for both consumers and producers, but during this epidemic the fragility of the economic linkages is revealed. The closed ports and manufacturing centers are affecting China’s economy as well. Economic growth is projected to slow to 4.5% in the first quarter of 2020, the slowest China has seen since the 2008 financial crisis.