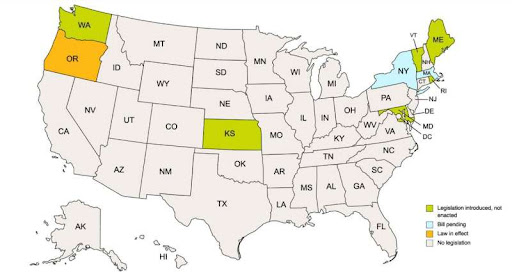 Every year, more than one million people are arrested for drug possession across the United States. Those who are charged with criminal drug offenses and convicted, on top of the legal ramifications, are also likely to face indirect consequences such as unemployment, eviction, loss of the right to vote, and deportation.

“Research shows that criminalization of drug possession contributes to the marginalization of people with substance use disorders, results in stark racial disparities, and costs billions of dollars. Decriminalization is one step to support increased equity.”

Due to the damaging and often disproportionate effects of these consequences, many advocates and community organizations have been campaigning for drug possession to be decriminalized. In response, states across the country have begun the process of decriminalizing possession of most or all controlled substances, including, for example, methamphetamine, heroin, cocaine, and psilocybin. New data shows which states are pushing through legislation and at which step in the process of decriminalizing personal drug possession each of them are at. Developed by the CPHLR, the data produced used the sentinel surveillance of emerging laws and policies legal mapping method to track laws so that researchers may quickly evaluate their impacts on health, well-being and equity.

Showcased in the map above, Oregon is the only state that has managed to enact a law decriminalizing the personal possession of all controlled substances. In November of 2020, Oregon voters approved Measure 110, which became operative in February 2021, reclassifying personal possession of all controlled substances from a criminal violation to a civil one. Measure 110 also allocated funds for community-based organizations to offer substance use treatment and harm reduction services. Since its passing, decriminalization efforts across the country have gained momentum, and several state legislators have introduced similar decriminalization bills.

Some of the proposed bills call for a significant overhaul of the state’s criminal code and a revamp of the infrastructure surrounding substance use disorder treatment, while others simply decriminalize threshold amounts of certain controlled substances. By January 2021, eight U.S. states – Kansas, Maine, Maryland, Massachusetts, New York, Rhode Island, Vermont, and Washington – had introduced bills to decriminalize personal possession of all or most controlled substances. Out of those eight, only two – New York and Massachusetts – have pending decriminalization bills in place. The other six states’ bills have all failed before reaching a chamber vote.

As the number of deaths by overdose continue to rise each year, decriminalization poses a potential shift in how states might address substance use disorders. Oregon has estimated that its new law will bring about an approximate 91% decrease in convictions overall with projections of a 93.7% reduction among Black Oregonians and a 94.2% reduction among Native American Oregonians. Policy makers anticipate that these bills will not only help the country address the historic overrepresentation of people of color in the corrections system, but will also have far-reaching impacts across state treatment systems, courts, and incarceration settings.