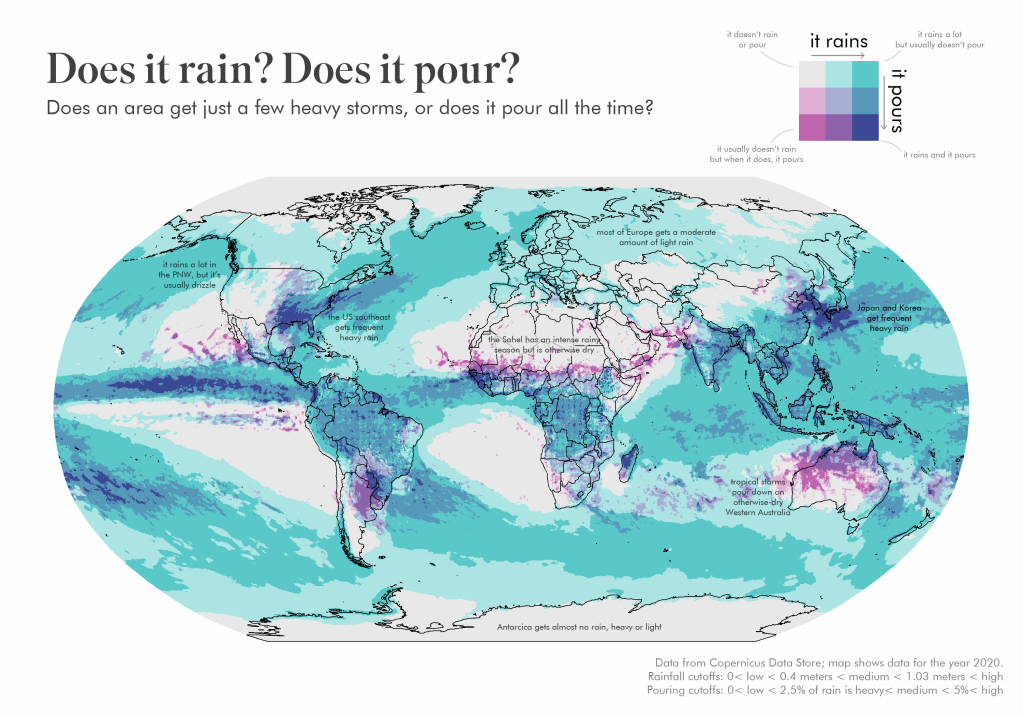 Oftentimes, mapping a common and unassuming phenomenon can reveal beautiful and thought-provoking patterns on the landscape. Precipitation, which is extremely variable depending on location, happens to be one of these cases. In a map created by Erin Davis, the frequency and intensity of rainfall is visualized across the globe, not only revealing areas that are simply wet or dry in climate, but also regions where rain is gentle or, alternatively, “pours”. When these two variables are overlaid on top of each other, a more interesting story unfolds.

When first inspecting the map, our eyes may pick out patterns that we expect first: a lack of rain in the Sahara, frequent and heavy rain across Brazil and the Amazon rainforest, constant light rain in Britain and France. However, upon further examination, some of the patterns revealed are less expected:  very dry but very heavy rain spells in Australia, absolutely no trace of rain in Antarctica, little rain in the ocean west and east of South America. In a sense, the patterns reveal different stories across the landscape; unexpected findings encourage us to inquire more.

For instance, Australia is extremely prone to flash floods, despite being one of the driest continents on Earth. These flash floods occur when a region is overwhelmed with very heavy rainfall over a short period of time—as alluded to in the map above. Antarctica, on the other hand, is the driest continent on earth, with the middle of Antarctica only receiving about 2 inches (50mm) of precipitation a year.

To some extent, all examples above can be inferred based on this one map, or at least, tells one part of the story. Additionally, this map is a great example of how visualizing data spatially can reveal overarching patterns that are difficult to see when looking at things on a more granular level.