First celebrated in the United States in 1970, Earth Day is now recognized worldwide each year on April 22nd. The holiday was founded by Gaylord Nelson, a former senator from Wisconsin, after he witnessed the after-effects of a massive oil spill in Santa Barbara, California. Inspired by anti-war movements from the same time period, Nelson was able to convince a Republican congress member to co-chair a “national teach-in on the environment,” and built a staff of 85 people to promote events across the United States. The first Earth Day has sparked thousands of actions, with the most notable being the creation of the Environmental Protection Agency (EPA) to help contribute to the overall healthiness of the planet and awareness of climate change. 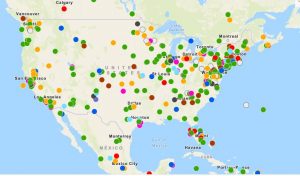 Source: Click this interactive to find Earth Day related events around the world.

Wednesday marks the 50th anniversary of Earth Day, and while many would rather be outside enjoying the wonders of nature, most governments are maintaining “stay-at-home” orders. Given the situation, the official Earth Day committee has shared an interactive map that includes ways people can get involved without having to leave their homes. The interactive map has specified activities for people with a myriad of interests and age groups. For example, the Hamilton County Recycling and Solid Waste District in Cincinnati, Ohio has organized a webinar called “Get the Dirt on Backyard Composting.” The International Network of SDG (Sustainable Development Goals) Promoters are hosting a teach-in on education for sustainable development, and the city of Honolulu is hosting an event called “Aloha Aina in April,” an online event that works with Hawaii based environment organizations to share online resources. The map offers hundreds of options to choose from so take a look for yourself– which event will you participate in to celebrate Earth Day?