The U.S Environmental Protection Agency was founded in 1970 under the Nixon administration after a renewed focus on environmental issues in American cities, most notably when the Cuyahoga River spontaneously ignited near Cleveland due to chemical pollution. Despite a new understanding of environmental degradation and sites of severe environmental harm, it wasn’t until 1980 that the EPA began its Superfund program aimed at managing cleanup of the worst environmental disasters in the country. The sites were officially designated on the National Priorities List (NPL) in 1983, identifying 406 sites as the nation’s priorities for cleanup under Superfund. Only those sites on the NPL may qualify for long-term remedial actions financed by the Superfund. The map above highlights all NPL sites past, present, and future. Sites that have been cleaned up effectively under EPA regulations are marked in green as “deleted NPL sites,” while sites under proposal for the list are shown in red. The map shows the large extent of environmental damages within the United States, stretching from Fairbanks, Alaska, to Puerto Rico and Guam. Not only that, but the sovereign state of Micronesia also previously held a superfund site, proving the legacy of U.S expansionism in the South Pacific. 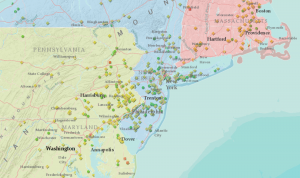 When exploring the map, visitors should be quick to notice the extreme density of sites in New Jersey and the Mid-Atlantic. In fact, New Jersey has the most sites out of any state or U.S territory, both in number and sites per square mile. This is a notable concern given that the story of superfund sites is also a story of climate change. There are many coastal sites which face extreme risk from floods, sea level rise (SLR) and wildfires. Some sites in Northern Jersey and the Gulf Coast have compounded risks from all three as demonstrated below. 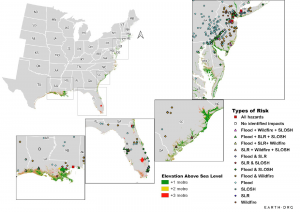 In order to respond to the increased risk posed by climate change, the EPA created the Superfund Taskforce in 2017, to provide recommendations for improving and expediting site cleanups and promoting redevelopment.

To find out more about superfund sites near you, visit the EPA’s comprehensive National Priorities List Map here.